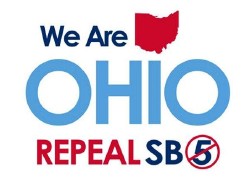 The conservative campaign against worker rights is losing in Ohio, according to a Quinnipiac University poll released today.

The support for the repeal effort is particularly noteworthy given the forces arrayed against it. Today, Truthout posted a special report on the effort against the referendum, which is fueled by literally untold millions of dollars in corporate cash.

A lot of that cash, according to author Mike Ludwig, is being funneled through the Republican Governors Association, which was a major contributor to Kasich’s successful 2010 election. “The RGA is using Make Ohio Great, a nonprofit group, to run ads featuring Kasich discussing elements of Senate Bill 5, without explicitly mentioning the ballot initiative. This ensures that the group can avoid revealing its finances to state officials. Make Ohio Great and the RGA share the same address in Washington, DC, but the RGA is also keeping its finances in the dark,” Ludwig writes.

We Are Ohio, the grassroots, union-backed organization leading the repeal effort, has tracked down some of the opposition spending. “We Are Ohio told media outlets earlier this month that Building a Better Ohio and Make Ohio Great spent $2.8 million and $1.2 million on television ads respectively. We Are Ohio outspent both with $5.4 million, but a spokesperson told Truthout to ‘expect to see the floodgates open up from out-of-state special interests as we get closer and closer to election day,'” Ludwig writes.

Kasich, as the Truthout article points out, is an alumnus of the American Legislative Exchange Council, the arch-conservative organization that is working to impose its right-wing blueprint for limited, corporate-centric government on states and localities nationwide. Among ALEC’s chief funders are the billionaire Koch brothers as well as Bayer, Pfizer, Wal-Mart, Exxon-Mobil and Coca-Cola.

These and other corporations have several conduits through which they can pour cash in a last-minute effort to defeat the repeal effort while evading public exposure, at least during the campaign. A super PAC, Stop Public Unions Now!, is registered with the Federal Election Commission and has aired ads featuring Kasich in support of SB 5, Ludwig reports.

“Other out-of-state groups defending Senate Bill 5 are more visible than SPUN!. Americans for Prosperity, a conservative group funded in part by the Koch brothers, has held town halls across Ohio to convince voters that Senate Bill 5 is good for Ohio. The Arlington, Virginia-based Alliance for America’s Future, founded by a former Ohio GOP operative and former Vice President Dick Cheney’s daughter Mary Cheney, is sending out millions of mailers in support of Senate Bill 5, according to media reports,” Ludwig writes.

On the other hand, the onslaught of corporate cash may well backfire, as is Kasich’s own high-handedness. What the poll shows is that other than doctrinaire Republicans, most Ohio voters support the basic rights of public workers. Of the poll respondents, 61 percent support the right of public employees to strike, 56 percent oppose limits on the ability of public employees to bargain over health care, and 51 percent oppose eliminating seniority as the sole factor when determining layoffs. And a majority of nonunion households support repeal of SB 5, just as an do an overwhelming percentage of union households.

Many voters will no doubt be swayed by the common sense statement of conservative talk-show host Bill Cunningham, who said that he is supporting the repeal because “from my perspective, those affected by governmental decisions need to have a place at the bargaining table to determine the outcome of what’s being discussed.”

At the Take Back the American Dream conference, a session was devoted to building on the successes of the Wisconsin push-back against Gov. Scott Walker’s assault on workers rights. The We Are Ohio movement has a hard fight ahead, but it is taking good advantage of the momentum that began in Wisconsin.

This piece was first published at the Campaign for America’s Future blog.