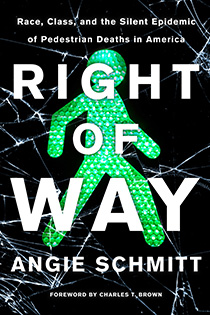 Race, Class, and the Silent Epidemic of Pedestrian Deaths in America

Among the lessons of COVID-19 is  that preventive health measures, and the lack thereof, make a huge difference. Longtime Streetsblog USA columnist turned author Angie Schmitt has long argued this. Her new book, Right of Way, describes how easy it would be to stop the epidemic of pedestrian deaths—if public officials wanted to do so.

I am a huge fan of Schmitt’s writings. I most appreciate that she doesn’t mince words. She lays out how public officials blame pedestrians for causing their own deaths and how the media describes these killings by reckless drivers as “accidents” rather than homicides. I defy anyone to read past the first chapter of this book without feeling rising at how America prioritizes its streets.

Schmitt lays out the problem as twofold. The first part is that “walking deaths fall disproportionately on those who are poor, black, brown, elderly, disabled, low income or some combination thereof—marginalized people with fewer political resources to demand reforms.”

The second problem, which covers much of the book, is how streets are entirely designed around the needs of cars. We prioritize car speed over pedestrian safety. We allow dangerous streets with few crosswalks to kill people year after year. Schmitt highlights a fact that may surprise many readers: pedestrians have the right of way crossing from corner to corner even without a painted crosswalk. Despite pedestrians having the right of way media coverage of pedestrian killings wrongly claim that those occurring outside painted crosswalks are the walker’s fault.

A reverence for King Car distorted the design of American cities. Excessive speeds, wide streets, “freeway close” access, vast stretches of street parking and parking lots and the lack of punishment for wayward drivers have created American cities in a very different model from Europe. An overwhelming group of white male highway engineers built a pedestrian nightmare, and many are still around to resist its change.

To give an example from my own experience: San Francisco, seemingly overnight, decided in the 1950’s to shift two major Tenderloin streets from two-way to one-way. The goal, as I detail in The Tenderloin: Sex, Crime and Resistance in the Heart of San Francisco, was expediting traffic to downtown and Union Square.

Residents finally got the city to enact a Tenderloin traffic calming plan in 2007 that would return Eddy and Ellis to two-way streets. Yet implementation took over ten years! (See “Tenderloin Still Battling for Two-Way Streets,” June 6, 2017).

If it takes “progressive” San Francisco over a decade to implement a traffic calming strategy in a highly dense neighborhood that was unanimously backed by elected officials, imagine the difficulty of making streets safer for pedestrians in other parts of America.

Schmitt’s book can be painful to read. We should all be troubled by the vulnerability of the victims whose cases she recounts coupled with cities’ unwillingness to promote safety. Pedestrian lives don’t sufficiently matter in progressive cities but it’s even worse in the Sunbelt. Pedestrians in these areas often lack sidewalks, and are open targets for negligent drivers. Funding for pedestrian safety is also limited nationally and particularly in the suburban Sunbelt cities she discusses.

Technology to the Rescue?

While recognizing the obstacles to increasing safety are political, Schmitt notes some key technological advances.. For example, cars can have functions installed that cause them to automatically stop at red lights. Studies estimate this could save over 1300 lives annually and over 600,000 injuries. Technology also exists that could sharply reduce collisions.

But the Trump Administration ended funding and support for such measures. We have billions of dollars being invested in self-driving cars but can’t get the government to support making person-driving cars safer. And with SUV’s making collisions more likely to be fatal—which Schmitt amply documents– the government’s inaction is truly inexcusable.

Angie Schmitt’s Right of Way is a long awaited and desperately needed wake up call for America’s cities. It will leave you both angry and motivated to act. And people need to get a lot more angry to transform our streets into safe places to walk rather than car-dominated danger zones.

Randy Shaw discusses traffic-housing policy connections in Generation Priced Out: Who Gets to Live in the New Urban America (UC Press 2020)