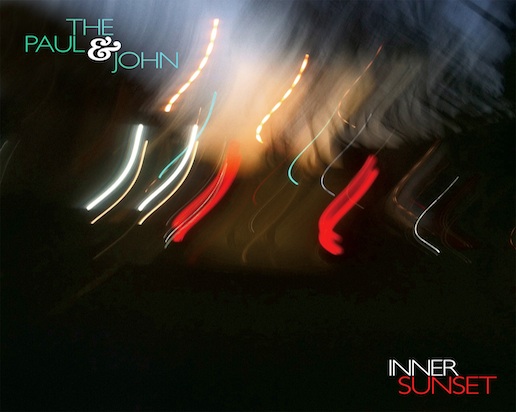 The new album by The Paul & John has been dubbed “an exciting new collaboration between two of the Bay area’s best musicians; guitarist/vocalist songwriters Paul Myers and John Moremen”, and they wouldn’t be far wrong. Inner Sunset proudly carries the Mystery Lawn Music imprint and is released on three formats, including 180-gram vinyl, last July. Myers & Moremen both sing and play all the guitars on the recording, while John plays the drums and Paul plays the bass and wrote all the lyrics. On Thursday night, October 29th, The Paul & John debut their new album at the Bottom of the Hill, alongside the Orange Peels and Felsen.

The two wrote all the songs together over three years at John’s studio in the Inner Sunset district of San Francisco, and then recorded and mixed the best of their collaborations with co-producer Allen Clapp (leader of The Orange Peels) at his Mystery Lawn studio in Sunnyvale, California. Once in the studio, Clapp proved to be a vital third ear in the arranging and presentation of the songs. Upon completion, Grammy nominated mastering engineer Myles Boisen gave the project its final sheen for record, at Headless Buddha, in Oakland. Myers & Moremen find that their shared experiences and eclectic tastes blend perfectly in The Paul & John, resulting in a set of original songs that both are equally proud of.

John Moremen is best known as the lead guitarist in The Orange Peels, and has released several solid solo albums, and recently has operated as the leader of Flotation Device. Moremen was a member of D.C. band The Neighbors and the late, great Jimmy Silva’s Goat 5, and plays guitar with Half Japanese, and on drums with ex-Flamin’ Groovies frontman Roy Loney and the improvisational rock trio High Vulture (with MX- 80’s Bruce Anderson).

Paul Myers was the founder and songwriter for the Toronto-based 1990s power pop group The Gravelberrys, and composes electronic music as Flam! Additionally, he is a working journalist and the author of notable music biographies including A Wizard A True Star: Todd Rundgren In The Studio (Jawbone Press), and It Ain’t Easy: Long John Baldry And The Birth Of The British Blues (Greystone Books).

Positive reviews of the duo’s eponymous debut are already hitting the web, including this one from Absolute Powerpop; “While an obvious Beatles reference, The Paul and John are also the first names of Paul Myers and John Moremen who have teamed up to give us a fine debut EP that, yes, owes a bit to the more famous Paul and John but has other influences as well. Many of you may know Moremen from his solo records and his time as guitarist for The Orange Peels, and Myers was the man behind the Toronto power pop group The Gravelberrys as well as an author of biographies of Todd Rundgren and Long John Baldry.

Thankfully the record lives up to their respective CVs. After the 20-second McCartney-esque “Inner Sunrise”, they segue into the wonderful “Everything Comes Together”, a glorious acoustic guitar-based track that reminds me of The Autumn Defense at their poppiest with some Byrdsian jangle throw in. “Long Way Back” rocks a bit harder and makes good use of the principals’ harmonies, and the title track with its stacatto beat and British Invasion melody sounds like the soundtrack to a parade down Carnaby Street….”

The Mystery Lawn label continues to release some great albums with marvelous tunes and fabulous production under Clapp’s watchful eye; the Orange Peels, Moremen’s Flotation Device, Alison Faith Levy, the Corner Laughers, and William Clere & the Marvelous Fellas, to name but a few; and with tunes like the aforementioned “Everything Comes Together”, (my personal favorite), Myers and Moremen’s Inner Sunset is truly a welcome addition to those ranks.

The Paul & John Record Release Show!
with The Orange Peels and Felsen
Thursday, October 30
The Bottom of the Hill
17th & Texas, SF
Music starts at 9:00/Doors 8:00