Pat Buchanan: “Too Many Jews!” 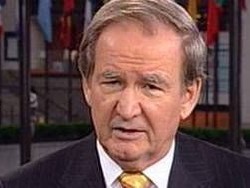 Conservative columnist Pat Buchanan has spilled the beans. He’s said what no doubt was on the minds of many right-wing Christians like himself when they heard of Elena Kagan’s nomination to the Supreme Court.

“If Kagan is confirmed,” Buchanan wrote in his syndicated column recently, “Jews, who represent less than 2 percent of the U.S. population, will have 33 percent of the Supreme Court seats. Is this the Democrats’ idea of diversity … Not in living memory has a Democratic President nominated an Irish, Italian or Polish Catholic, though these ethnic communities once gave the Party its greatest victories in the cities and states of the North.”

If he did, he’d be concerned that, with the departure of Protestant Justice John Paul Stevens, the highest court in the land will be composed of 67% Catholics. Only 22% of this nation’s population is Catholic.

About 15% of Americans don’t have any religion at all.

Obviously, Buchanan isn’t about to champion a nonbeliever justice, nor is he likely to be bothered by the disproportionate number of Catholics on the court. He’s a Catholic. He’s also been bashing Jews for decades, so his latest anti-Semitic remark comes as no surprise to anyone.

In the 1980s, Buchanan urged then-President Ronald Reagan to make a stop at Bitburg Cemetery in Germany where Nazi SS soldiers were laid to rest. He told Jewish leaders who objected to the visit that they should remember they are “Americans first.” He penned Reagan’s quote that the Nazis in Bitburg were “victims just as surely as the victims in the concentration camps.”

In a 1990 column, Buchanan joined forces with Holocaust deniers, though he’s never called himself that. He wrote that the exhaust from diesel engines, used to murder people in the concentration camps, “do not emit enough carbon monoxide to kill anybody.” But they did. There’s no denying that.

He suggested in another column that Holocaust survivors suffered from “Holocaust Survival Syndrome,” which creates “group fantasies of martyrdom and heroics.” In another words, Jews and others imagined what they experienced in the death camps? Next he’s going to tell us that the victims of the Inquisition suffered from the same condition.

Playing into classic stereotype about Jews, Buchanan said in 2007, “If you want to know ethnicity and power in the United States Senate, 13 members of the Senate are Jewish folks who are from 2 percent of the population. That is where the real power is at.”

Buchanan is an old bigot from a time when it was okay to bash Jews, gays, people of color and others. A time when few spoke out.

Fortunately, that time has long passed.