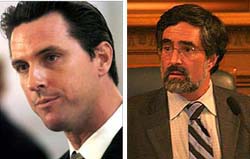 As the Board of Supervisors prepares to approve legislation tomorrow restricting the number of new parking spots built downtown, it appears possible they will come short of the necessary eight votes to stave off a mayoral veto, setting the stage for the third such veto in less than a month. Similar to the eviction defense legislation recently killed by the Mayor’s office, Newsom seems prepared to veto legislation without offering a substantive alternative primarily because downtown interests want him to do so. Should Newsom once again do their bidding, it’s time for the Chamber of Commerce and Committee on Jobs to recognize the December ‘accountability session’ they had with the Mayor as a resounding success.

The first three years of Newsom’s administration have been marked by a relatively amicable relationship with the Board of Supervisors. No massive conflicts erupted between the two bodies, with even last year’s budget passing the Board unanimously. Newsom matched this image with rhetoric, claiming in his inaugural address, “We can stop each other – or we can start solving problems together. I say it is time for solutions.”

However, while Newsom’s apparent ability to work with the left boosted his citywide approval ratings past 80 percent, it angered the downtown interests that helped fund his campaign for Mayor. Their frustration culminated in a mid-December meeting between Newsom and several high-level downtown players, including the Committee on Jobs’ Nathan Nayman and the Chamber of Commerce’s Steven Falk. Dubbed an ‘accountability session,’ participants demanded the Mayor start making the interests of those who got him elected a priority.

The first bit of evidence that it worked came soon after the Board reconvened from its winter break. They quickly passed two pieces of legislation – one aimed at providing more disclosure to potential homebuyers about the history of their homes, the other at introducing more governmental oversight of Ellis Act evictions – only to have the Mayor announce he would veto both.

Now, it appears likely Newsom will veto yet another progressive piece of legislation. The parking proposal, first forwarded by Supervisor Chris Daly, and now being sponsored by Supervisor Aaron Peskin with Sophie Maxwell and Daly as co-sponsors, would limit the number of parking spots developers could build downtown to three spots for every four new units of development.

The legislation makes sense. With thousands of new units slated for downtown, it’s vital to put restrictions in place now that keep the area transit-rich, livable, and a model for other cities hoping to end their dependence on automobiles. Limiting parking spaces in the neighborhood would help reduce the traffic congestion likely to snarl the area as more people move there. It also ensures a higher level of residential density on a major transit corridor, which almost all city planners agree makes cities more livable places while preserving open space.

Despite all this, Newsom announced early on he would veto the legislation, echoing claims by downtown businesses that it would limit parking spaces for tourists and from downtown developers that it would make financing projects more difficult. While Supervisor Jake McGoldrick introduced a resolution in committee that allows more units (those with 2 bedrooms and over 1,000 square feet) to be allowed one parking spot for every unit built, it appears unlikely this will weaken the legislation enough to stop a mayoral veto.

The chance remains for a veto-proof eight votes to be obtained. Board President Peskin putting his support behind it could pick up more votes, as could the Planning Department’s strong support. As is often the case, Supervisor Bevan Dufty will likely be the swing vote.

However, should the Board fail to avert a veto, several troubling issues raise their heads. First off, it becomes increasingly clear that Newsom’s early attempts to paint himself as a progressive represented little more than window dressing. While his conservative record as a member of the Board of Supervisors led many to distrust Newsom early on despite his laudable actions surrounding progressive issues, it now appears the Mayor’s true colors are once again showing.

Second, his shift back to the right could be a dramatic one. Rather than trying to reposition himself as a centrist, Newsom appears willing to cater to downtown interests in the hopes of soothing their nerves. His veto of non-controversial eviction disclosure legislation earlier this month, and his possible veto of a measure even Planning Director Dean Macris seems pleased with this week, reveal the new Newsom could be just as far right as the old.

Finally, it shows progressives will have an uphill battle during the next year. As Newsom proves increasingly unwilling to work with the Board on a variety of issues, getting good legislation through will now often either requiring going to the ballot or gutting it so extensively it barely resembles its original form.

The Board will vote on the issue at tomorrow’s meeting.