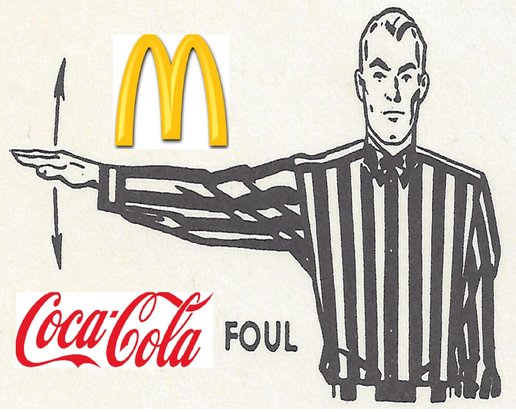 Coca-Cola and McDonald’s are two companies with slipping sales that were looking for Super Bowl advertising wins on Sunday in order to turn things around.   Both companies aggressively market products that are harmful to health and use sports as a way to healthwash soda and fast food.

They use a polar bear and a clown to tell kids soda is happiness and fast food is lovin’, but that strategy is now backfiring as customers are dropping these iconic brands.

“However, for these two companies, this advertising approach also has a shrouded message: ‘Ignore the negativity … especially when it comes to us.'”

McDonald’s woes have gotten so bad that its CEO Don Thompson announced his retirement on the Wednesday before the big game.

“The students in my classes don’t even think of going to McDonald’s. They’ve been taught not to go there since they were kids.  His challenge is immense. He’s got a whole generation that wants nothing to do with McDonald’s.”

This reflects a growing sentiment among parents who are fed up with companies telling kids fast food is lovin’ and soda is happiness.  Smart companies get ahead of the consumer trends and there has been ample warning that marketing junk food to kids will no longer be tolerated by today’s parents.

The research from Yale Rudd Center for Food Policy and Obesity shows how aggressively McDonald’s markets to children compared to its competitors:

With that in mind, compare the stock of McDonalds (red) to Wendy’s (green) over last 6 months using this image from CNBC’s Carl Quintanilla:

What’s happening with Coca-Cola and McDonald’s sales should serve as a wakeup call to other companies that times have changed and parents will no longer tolerate kids being targets for junk food ads. 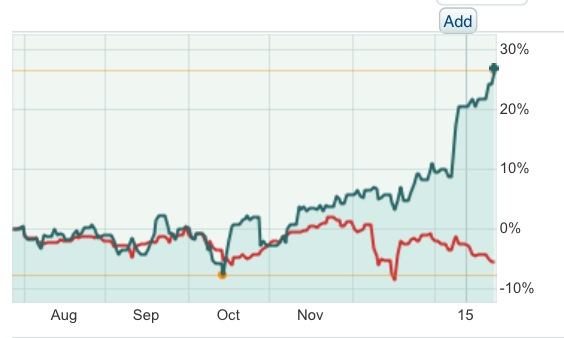 These concerns over marketing to children are expanding beyond just their health. Arwa Mahdawi recently wrote about ‘profitics’, the troubling combination of corporate power and politics:

“There has been a lot of talk about the need for schools to teach coding to children early on so as to better equip them for a digital world. But there has been less talk about the need to rethink how schools teach geography, politics, and citizenship in light of the growing sociopolitical influence of big business. Which is ironic because, while school curriculums largely ignore corporations, corporations are trying to insinuate themselves into curriculums. IBM is opening high schools, Starbucks has partnered with Arizona State University, and McDonald’s has taught nutrition to elementary school kids and thrown McTeacher’s nights.

If we want to educate kids about corporations, rather than have corporations teach our kids, we need an educational paradigm shift. Basically schools need to teach a class that helps kids understand business jargon (Corp BS™), navigate corporate cartography, and recognise that corporate governance has as much of an impact, if not more, as governments on their future.”

These kinds of concerns are also reflected in a new report from Campaign for a Commercial-Free Childhood called OUT OF BOUNDS: The NFL’s Intensive Campaign to Target Children.  It details “how the league advertises to children online, on children’s television stations, in schools, and in partnership with trusted nonprofits and government agencies serving kids and families.”

The NFL’s junk food partners include McDonald’s, Pepsi, Frito Lay, and Mars who rely on these connections with professional football to healthwash their products.  The report also touches on the many adult problems the NFL brings into children’s lives by association including concussions, racial slurs, domestic violence, child abuse, gambling, and alcohol.

The writing is on the wall as parents call foul on companies that put profit ahead of children’s health.  CEOs would do well to recognize this trend and get ahead of the curve or they will soon find themselves out of the game, just like Don Thompson.