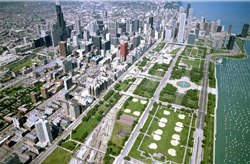 (Part 2) The Enemy Within

The story of institutionalized racial discrimination and economic segregation in Chicago begins in 1931. In that year, Chicago Real Estate Board member James Downs formed an organization known as the Real Estate Research Corporation (RERC) to conduct block by block surveys of the level of racial change in Chicago neighborhoods. Spurred on by the arrival of federally funded construction projects made possible by New Deal legislation, the purpose of this type of analysis was to help wealthy, white property owners hold the line against encroachment into their neighborhoods by low-income people and people of color.

In his capacity as a member of the Chicago Real Estate Board, Downs, who would go on to become the Windy City’s housing and redevelopment coordinator under Democratic mayors Martin H. Kennelly (1947-1955) and Richard J. Daley (1955–1976), advised real estate agents to only sell or rent housing to African Americans located in areas adjacent to where a majority of black people already lived. This effectively led to the creation of enormous ghettoes across Chicago that persist to this day. So useful was the data compiled by Downs’s organization that it may have served as the basis for the institution of redlining at a national level.

This supposition is given weight by the fact that by 1955, state and federal agencies were routinely calling upon RERC to advise them on issues of public housing and urban renewal across the country. What is also certain is that RERC had developed the capacity to generate policies and plans related to public housing and urban renewal and redevelopment that would go on to influence national legislation and be held up as national models.

The Housing Act of 1954, for example, expanded the definition of urban renewal to include commercial redevelopment in addition to neighborhood conservation. This was prompted by a 1953 RERC plan for urban renewal that involved the Englewood shopping district on Chicago’s South Side.

Of all the legacies attributable to James Downs and RERC, though, perhaps the most odious belongs to his son Anthony Downs, a University of Chicago economist who first outlined the policy of spatial deconcentration in a 1968 report by the Kerner Commission.

According to journalist Frank Morales, the Kerner Commission was created by President Lyndon Johnson to investigate the causes of the urban riots that took place in American cities during the 1960s. In Chapters 16 and 17 of the Kerner report, Anthony Downs identifies the concentration of poor people in city centers as an important factor in the civil disorder of that time and recommends a strategy of “spatial deconcentration” to reduce the potential for future disturbances.

As spelled out by Downs, this policy involves the dispersal of the urban poor from the inner cities and the resettlement of their neighborhoods with middle class residents through a process of disinvestment and redlining on one hand and predatory lending on the other. The combination of alternatively denying conventional bank loans and insurance to property owners in low-income neighborhoods while making available high risk, predatory-type loans typically results in mass evictions, foreclosures, and abandonment of property in the inner cities. The resulting ghettos are then declared blighted areas and designated for redevelopment or urban renewal (i.e., gentrification).

Despite a 1969 federal ruling in the case of Gautreaux et al v. Chicago Housing Authority (CHA) which found that the CHA was guilty of deliberately planning and executing racially discriminatory public housing policies that effectively segregated African Americans in low-income neighborhoods, the strategy of spatial deconcentration was enshrined as federal policy in the Housing and Community Development Act of 1974. Section 5301 states that the U.S. Department of Housing and Urban Development (HUD) supports “spatial deconcentration of housing opportunities for persons of lower income and the revitalization of deteriorating or deteriorated neighborhoods to attract persons of higher income.”

Predictably, the adoption of spatial deconcentration and gentrification as a model for public housing policy and community development nationally has resulted in increased homelessness in the U.S., a fact borne out by the upsurge in federal spending on homeless shelters ($300 million in 1984 compared to $1.6 billion in 1988), and the de facto resegregation of U.S. society along economic and racial lines.

In Chicago, the plight of the Cabrini-Green public housing tenement ably illustrates how spatial deconcentration and gentrification can successfully remove large swaths of the urban poor from the inner city, making the area safe for yuppies and other middle income earners. At its height, Cabrini-Green housed 15,000 of Chicago’s poorest residents in mid- and high-rise apartment buildings constructed during the tenure of Chicago Housing and Redevelopment Coordinator James Downs. The racially discriminatory public housing policies promulgated by Downs, the Office of the Housing and Redevelopment Coordinator, the Department of City Planning, and other governmental agencies helped to ensure that endemic poverty, crime, and economic segregation would be the lot of Cabrini-Green residents, a majority of whom were African Americans.

After a suitable period of decay, private developers, architects, and the Chicago Departments of Planning and Housing, the CHA, the Illinois Housing Development Authority, and the Federal Home Loan Bank moved to transform Cabrini-Green into a lower density, mixed-income neighborhood consisting of mid-rise buildings, duplexes, and row houses in the 1990s. Their argument for seizing and demolishing large sections of the public housing tenement was that Cabrini-Green had become an eyesore; it was too rundown and crime-ridden, and it s existence was representative of the failure of public housing and public housing policy in general.

Today, only about 5,000 of the original Cabrini-Green residents remain. The other 10,000 public housing tenants have been effectively driven out of Chicago to the outer suburbs and other cities and states, because they cannot afford to return to the new Cabrini-Green. This, despite the existence of a consent decree which stipulates that:

“All new developments on Chicago Housing Authority (CHA)—owned or city-owned land within the Near North Redevelopment Initiative (NNRI) area are required to include 50 percent market-rate units, 20 percent affordable housing units (i.e., those set aside for households earning less than 120 percent of the area median income [AMI] for for-sale units; below 80 percent AMI for rental units), and 30 percent CHA/public housing units (i.e., those reserved for households making below 80 percent of AMI).”
(Urban Land Institute, 2006: 84)

The Cabrini-Green Consent Decree is the result of a 1996 lawsuit filed against the CHA and the city of Chicago by Cabrini-Green residents who were unhappy at the prospect of being displaced from their homes without adequate recompense, and who also felt that they had been excluded from the planning process for redeveloping Cabrini-Green.

On the Front Lines

In San Francisco, where the cost of living is among the highest in the U.S., the political economic retrenchment that has taken place over the past 30 years has not only devastated individuals and families at the lower end of the income scale, it has also begun squeezing out middle-income earners. In a 2004 report, United Way of the Bay Area (UWBA) calculated county by county the Self-Sufficiency Standard for 2003 for 70 family types in California. That is, the amount of income needed to pay for the basic necessities of housing, food, child care, healthcare, transportation, taxes, and miscellaneous services in 2003. For a two-parent household in San Francisco with one preschooler and one school-aged child, each parent would have to earn a minimum of $14.27 an hour to be self-sufficient (Pearce, 2003: 18). That’s a combined income of about $4,566 a month or $54,796 a year. In the Bayview, where average household incomes are at least eight percent lower than the rest of the City, residents often find themselves engaged in a daily struggle to maintain food, clothing, and shelter.

Interestingly, proponents of urban renewal in San Francisco and elsewhere have used this very fact to justify the gentrification of low-income neighborhoods like the Bayview. Nobody would disagree that San Francisco should invest in renewable energy sources and create open space, recycle water, reduce greenhouse gas emissions, and create jobs to eliminate crime and poverty. However, it is telling that the wave of dot-com-driven economic development that swept through the South of Market area between 1994 and 2004 resulted in a decline in the number of low- and moderate-income households living in the City over the last 15 years, while the proportion of households earning $100,000 or more has increased over the same time period.

In real terms, this means that San Francisco’s population has become less culturally and ethnically diverse at the same time that it has become less economically diverse. This conclusion is supported by a 2005 report from the Public Research Institute at San Francisco State University which found, among other things, that African Americans in all age groups under 40 are disappearing from the city at an astonishing rate (Blash, Shaffer, Nakagawa, and Jarrett, 2005: 5). This fact effectively negates the argument that community development and/or redevelopment is designed to bring prosperity to all income groups alike. In truth, what is happening in San Francisco and across the U.S. is that major cities are being ethnically cleansed of their poorest residents.