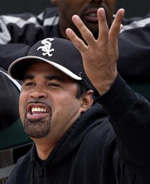 The Chicago White Sox’ Ozzie Guillen, a potty-mouthed ignoramus who inconveniently happens to be a terrific baseball manager, is deep into his latest cauldron of scalding aqua for having repeatedly called a critical Chicago sports columnist a “fag.” No scholarly discussion of homophobia in our society here, or of the multicultural contradictions of our national pastime, or of the proper sanction for the serially unrepentant yoda of the defending World Series champions. I’d like to focus on a side issue that was well summarized by Rick Morrissey, a columnist for the Chicago Tribune, the competitor of the Chicago Sun-Times, whose Jay Mariotti was the victim of Guillen’s hate speech.

Morrissey’s thesis: “If you’re a sports columnist, you show up in the clubhouse to face the music. It’s a matter of fairness.” By filing a high percentage of his material remotely, Mariotti is effectively “the nation’s first blogger, without actually writing one.” Blogs are “one of the best and worst things that has happened in our society — best because everyone can have his say, not just us so-called experts; worst because everyone can say anything with almost no accountability.” The result has been a descent into incivility.

As my closest friends can tell you, calling out sportswriters, indeed fellow journalists of all stripes, is one of my avocations — along with the economic and moral rights of freelance creators and a compulsion to attend the first screening of every bad Sandra Bullock movie. For me, Morrissey’s take on Guillen-Mariotti marks an opportunity to get a few things off my chest about the pathetic state of contemporary public dialogue.

And, yes, Ricky, I’m doing so via an online forum, not a face-to-face confrontation. Unlike your employer (which among other things bought the best newspaper in California, the Los Angeles Times, and proceeded to nickel-and-dime it into mediocrity), I can’t afford the air fare to the Windy City for that limited purpose.

Still, speak out I must. In my opinion only a pampered corporate stooge would think of using an episode like this to make the point that new communications technology does more harm than good.

I don’t know Jay Mariotti. A non-cable subscriber, I understand he’s a panelist on one of ESPN’s numerous shoutfest shows, which makes him yet another exhibit of a noxious trend. (See “Ray Ratto and the Great ESPN Co-Opt,” Beyond Chron, February 7, 2005, https://beyondchron.org/news/index.php?itemid=2609, and “Sports Journalists and the Great ESPN Co-Opt (Continued),” Beyond Chron, January 30, 2006, https://beyondchron.org/news/index.php?itemid=2886.)

On the other hand, when I was researching a failed book proposal on the 2001 death of Northwestern University football player Rashidi Wheeler, my perusal of Chicago media coverage showed that Mariotti was the story’s earliest and most aggressive commentator. After watching a sickening video of the brutal “voluntary” conditioning drill that killed Wheeler, Mariotti took one of the city’s sacred cows, Northwestern University, as well as football coach Randy Walker, to task for their borderline-criminal negligence. At the back end of the story, Mariotti raked the university for its smear campaign against Wheeler’s courageous mother, Linda Will, who was branded crazy for resisting the multimillion-dollar settlement the judge in her wrongful-death lawsuit imposed on her, and for fighting in vain for her day in court.

Incidentally, I emailed praise to Mariotti at the time. As the sports staff of the Chronicle in particular know, I write lots of emails every week to journalists, both positive and negative, in reaction to their reporting and analysis. I encourage everyone else to do the same. A meager megaphone, maybe, but it beats muttering at the TV screen.

No two of my emails are alike. What they have in common, with rare exception, is the lack of a reply. And forget about it if your email software doesn’t support lip attachments that can be clamped directly to the recipient’s buttocks.

One time I sent David Kipen, then the Chronicle’s book editor, a detailed appreciation of an essay he had written about Daniel Fuchs, a novelist from the 1930s we both admire. Kipen asked me for permission to forward the post to his boss. “No,” I said. “Not until the Chron starts running my critical letters to the editor, too.”

Sportswriters are among the worst correspondents. The explanation, it seems, is that these knights of the keyboard (an old Ted Williams phrase) are too busy. Yeah, sure — busy stuffing their faces at press box buffets.

It’s all enough to make one wonder why newspapers bother publishing email addresses. Could it be that they enjoy the image of a two-way conversation with their readers without having to bear the — what was Morrissey’s word? — “accountability” of actually dealing with the phenomenon with intellectual integrity?

No doubt the Chronicle’s Bruce Jenkins has had it with my electronic effluvia, and the feeling is mutual — I couldn’t be more tired of his lazy beer-guzzling-fan act. (See “Jinx Jenkins’ Three-Zit Lounge,” Beyond Chron, November 30, 2005, https://beyondchron.org/news/index.php?itemid=986.)

One of Jenkins’ writing tics, which converges nicely with a space-filling strategy, is to make fun of people’s names. Hardy-har-har. Here we are in the diversity capital of the universe and one of our sports columnists’ idea of a thigh-slapper is referring to how awkwardly someone’s parent-given handle scans to Anglo-Saxon ears. I used to encounter wittier badinage on the elementary school playgrounds of West St. Louis County, Missouri.

A few years ago — once — Jenkins did write back, somewhat patronizingly, to say maybe I had a point but what the heck. When I persisted for a substantive answer, he cut me off. Overcoming my natural shyness, I kicked the dispute up to executive editor Phil “Boots” Bronstein. Boots said yeah, the email management thing is a huge problem for his harried charges, but he would soon be hiring a reader’s advocate, or ombudsman, or as King Lear’s bastard son Edmund might have called it, that “admirable evasion of whoremaster publisher.” I hope to return in depth to the subject of the ombudspersons scam in a future column.

It’s possible that Jenkins learned name-calling at the feet of his former Chronicle colleague Tim Keown, who is now employed by — of course — ESPN. One of the truly brilliant stream-of-consciousness humorists of our era, Keown traded on the same trope for a number of years, until it caught up with him after a disparaging reference to a boorish and homophobic Giants pitcher at the time whose name was Jeff Juden. Unbeknownst to Keown, “Juden” is German for “Jewish.” As damage control, the Chron trotted out a letter by Hank Greenwald, the former Giants broadcaster and a Jew, to assure one and all that his good friend Tim Keown didn’t have an anti-Semitic bone in his body.

Touchy touchy. There are major criticisms and minor ones, deep thoughts and flights of whimsy. At different times and places all would have their place if the people who practiced the “craft” of journalism didn’t regard themselves as some credentialed combination of savant, insider, and gatekeeper.

You also should know that I don’t just play “gotcha.” In 2003, during a five-game series against the Chicago Cubs, the St. Louis Cardinals’ manager, Tony La Russa, tried to spare his depleted bullpen by using a starting pitcher, Woody Williams, in relief. The next day a Chicago columnist — I forget which one — wrote that La Russa was asked the last time he had resorted to that ploy with the Redbirds; La Russa replied, “Joaquin Andujar.”

This was a factual error and an astronomically impossible quote rolled into one, somewhere in that twilight zone between fabrication and delusion. Whitey Herzog infamously ordered Joaquin Andujar to mop up when the Cardinals were blown out in Game 7 of the 1985 World Series. La Russa managed Andujar the next year and the one after that, in Oakland. But Andujar had been retired for years by the time La Russa took over in St. Louis. There is just no way La Russa could have said what he was quoted as saying, or anything like it.

Yet when I gently pointed this out to the columnist I got back nothing.

So, Rick Morrissey, kindly spare us your lectures on etiquette and on the manly man’s way of covering sports. I’ve done my share of jock-sniffing and I can assure you that the inane macho rituals of the clubhouse press conference serve your pack mates more than they do the hundreds of thousands of readers of your newspaper. As in Stephen Colbert’s parodies of White House press briefings, they simply license fools.

Below is the email I sent Morrissey on Friday. As Beyond Chron was publishing this piece, I’d not heard back from him. Here’s betting I never do.

I don’t know the whole story on this flap, but your formulation — you must show your face in the clubhouse the day after you rip someone — is a recipe for the inside-the-Beltway mentality of so much mainstream journalism, which uses such macho rituals as a mask for bland consensus. I mean, it’s not as though Mariotti writes anonymously or can’t be located when someone is unhappy with what he says. I, personally, am much more concerned about the practice of publishing columnists’ email addresses, creating the illusion of interactivity with their readership, when in reality they just delete, blow off, or otherwise fail to respond responsibly to the legitimate criticism and counterpoints that land in their inboxes. The excuse is that most of these emails are semiliterate talk-radio rants, but not all of them are, and mine here is an example. Let’s see if you go against type and write back thoughtfully.

Irvin Muchnick is author of the forthcoming Wrestling Babylon: Piledriving Tales of Drugs, Sex, Death, and Scandal. His website is http://www.muchnick.net.