Out of the Margins, Into the Fray: Vermont Progressive Party Wields Outsized Influence on State Politics 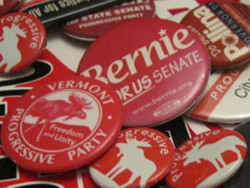 In this presidential election year, millions of voters find themselves caught, once again, between a Republican rock and a Democratic hard place. Our two-party system is, per usual, serving up less than a wide range of ideological choices. The absence of viable third party alternatives isn’t just a longstanding national problem. In too many state and local elections, only major party candidates have the funding, organization and media visibility to be competitive. As a result, minor parties have had relatively little electoral success since the heyday of the Socialist Party a century ago, when many of its candidates did become municipal office holders.

One state where left-leaning voters do have greater choice today — and their own political voice — is Vermont. Thanks to several decades of persistent organizing, the Vermont Progressive Party (VPP) now boasts seven members in the legislature — two senators (out of 30) and five representatives (out of 150) in the House (some of whom affiliate with the Democratic Party as well). Since Vermonters sent the first “Prog” to Montpelier in 1990, 16 have served a total of 48 legislative terms in the state capitol. Progressives have introduced legislation, served on key committees and played a catalytic role in public policy formation.

Despite the VPP’s recent loss of Burlington City Hall, where Progressive mayors have been predominant for thirty years, the party retains three city council seats (out of 14) in Vermont’s largest municipality. Since 1981, more than 29 Progressives have served on the council. One newly-elected VPP member is Max Tracy, a 25-year-old former student activist at the University of Vermont, who is now involved in organizing campus workers. Tracy won in the city’s Old North End section by campaigning for living wage jobs, affordable housing, a sustainable transportation system and greater support for local farmers and gardeners.

In similar fashion, Progressives elected in nonpartisan races in smaller towns serve on local school committees, select boards and community planning bodies. Plus, they turn out on Town Meeting Day to help pass resolutions in favor of issues like tax reform and overturning the Supreme Court’s pro-corporate decision in Citizens United — both the subject of town meeting action in 70 Vermont communities in March. While never formally aligned with the VPP himself, Vermont’s independent U.S. senator, socialist Bernie Sanders, has backed other Progressive candidates for state and local office, while VPP activists have, in turn, been his most ardent supporters in past statewide races.

Taking a leaf from Sanders’ singular 30-year career — as Burlington mayor, then Vermont’s lone congressman, and now junior senator–the VPP has distinguished itself from the Democratic Party by focusing, in populist fashion, on economic issues. In areas of the state where working-class voters might otherwise be swayed by cultural conservatism or residual rural Republicanism, the VPP has, like Sanders, won elections by campaigning for labor rights, fair taxes and single-payer healthcare far more consistently than the Democrats. The party’s statement of principles has a distinct tinge of Occupy. “Democracy,” it declares, “requires empowering people not only in government but also in the workplace, schools, and in the overall economy. Society’s wealth should not be concentrated in the hands of a few, and a wealthy minority should not control the conditions under which we live.”

One measure of the Progressive impact on public policy is the single-payer bill passed in Vermont last year. Prior health care reform campaigns failed either because Vermont had a Republican governor opposed to single-payer or a Democratic governor (Dr. Howard Dean) who pledged to support the concept when running for office, but then turned against it, on grounds of fiscal conservatism, after getting elected.

In coordination with a strong grassroots movement, Sanders and the VPP continued to make single-payer a central political issue, keeping the pressure on local Democrats (at a time when their counterparts in neighboring Massachusetts were opting for lesser reforms that provided the model for President Obama’s Patient Protection and Affordable Care Act). Current Democratic Gov. Peter Shumlin’s previous bid for statewide office — a run for lieutenant governor in 2002 — ended in defeat when Progressive Anthony Pollina, a strong single-payer advocate and now a state senator, received 25 percent of the vote.

Determined to avoid that fate again, Shumlin, a millionaire businessman and former Senate president, tacked left on healthcare reform in the 2010 Democratic gubernatorial primary and the general election. He narrowly won the five-way primary and then, with no Prog in the race, defeated Republican Brian Dubie by a 2-percent margin after getting much-needed help from Sanders with last-minute working-class voter turnout. With a Democratic-Progressive majority in both houses of the legislature in 2011, Shumlin followed through on his campaign pledge to introduce a state-level single payer plan–but this first-in-the nation innovation may still be thwarted, due to business opposition during a complicated multi-year implementation process or any intervening loss of Democratic Party control over the legislature or governor’s office.

“We have a homeopathic role in the Vermont body politic,” says Ellen David-Friedman, a former organizer for the Vermont-National Education Association (NEA) and longtime VPP activist. “We’ve managed to create enough of an electoral pole outside of the Democrats to constantly pull them to the left on policy issues, by dispensing an alternative brand of medicine that’s become increasingly popular.”

In many other states, most labor activists like David-Friedman have shied away from “pure” third party activity because they don’t want to back political “spoilers” or, short of that, just mount losing campaigns with no impact on major party behavior or election results. Elsewhere in the northeast, labor-financed Working Families Parties (WFP) were launched instead so “fusion voting” could be used, where permitted under state law, to reward the friends of union causes by giving cross-endorsed candidates an additional ballot line. Banned in most of the nation a century ago (as part of the corporate counter-attack against Populism), fusion allows major party candidates, in states like New York, to garner additional votes on each endorsing minor party’s separate ballot line.

In theory (and sometimes, in practice), this system provides small parties on the left or right with greater leverage because they can punish unresponsive mainstream candidates by withholding their support and running their own competing candidates. New York’s union-dominated WFP has proved generally reluctant to do this, however. Two years ago, WFP leaders cross-endorsed Andrew Cuomo for governor even though he favored public employee benefit cuts and curtailment of labor’s clout in Albany.

“Our strategy of both challenging and working with Democrats in a different way makes us somewhat unique,” says Martha Abbott, a tax accountant from Underhill, who was re-elected chair of the VPP at a lively party conference in Montpelier last November. To maintain its “major party” status under Vermont law, the Progressives must field at least one statewide candidate every two years who garners 5 percent or more of the vote. Due to their lack of wealthy individual and corporate funders, Progressives rarely perform better in statewide races than Abbott did herself, with a 12 percent showing in her 2008 campaign for state auditor. (Pollina, however, garnered 22% of the vote that year, leaving a prominent Democratic state legislator in third place in the gubernatorial election.) In Vermont House and Senate races, the barriers to victory aren’t as great so the VPP has lately focused on recruiting and supporting viable contenders for legislative seats.

With a population of just 626,000 people, Vermont has electoral constituencies small enough for people with progressive ideas to canvass door-to-door, meet nearly every voter and drum up enough campaign contributions to be competitive (even in the absence of any system of public financing of elections). House member Chris Pearson, who specializes in tax and budget issues for the VPP, represents one of the state’s larger multi-seat districts; he only had to raise $12,000 for his last election campaign — candidate spending that wouldn’t pay for your bumper-stickers in California or New York.

Some VPP legislative candidates have, like Pollina, campaigned with the “D/P” label — a form of de facto cross endorsement achieved after running successfully in a Democratic primary. Where possible, other Progressives have also sought Sanders-like accommodations with Democrats in races where a strong general election showing by two left-of-center candidates would guarantee Republican victory. Several VPP legislators, including state Rep. Susan Hatch Davis, actually represent districts where their main competition comes from GOP nominees; local Democrats are, in effect, the “third party.”

The VPP’s politically savvy and flexible approach has helped it struggle against what Executive Director Morgan Daybell calls “the negative perception of third parties in general.” In contrast, local Greens and what’s left of the Liberty Union Party in Vermont — Bernie Sanders’ original political home in the 1970s — have suffered the fate of most left-wing parties elsewhere (i.e. being presentable but marginal at best, ideologically pure, or just plain eccentric, with little to show, organizationally, for any single-digit share of the vote they garner).

During a mid-March visit to Montpelier, I found VPP legislators like Pollina making their presence felt under the gilded dome of the state capitol building, despite two-party dominance. A former Sanders’ aide and longtime advocate for farmers, tax justice, and campaign finance reform, Pollina joined Sen. Tim Ashe (D/P) in the state Senate two years ago. In the 2012 legislative session, he has been promoting the idea of a state bank, a bill requiring Vermont to “hire and buy local” (when contracting for state services) and a budget-related survey of poverty and income inequality.

Elsewhere in the same building, Rep. Pearson huddled with Reps. Mollie Burke and Sarah Edwards at the weekly meeting where VPP members of the House gather to share information and coordinate legislative strategy. Burke and Edwards are both from the Brattleboro area and much engaged with environmental and public health issues related to decommissioning the Vermont Yankee nuclear power plant in their corner of the state.

In White River Junction and other communities, Windsor County Party Chair Liz Blum and several elected local VPP officials have been working with the Vermont Workers Center and local Occupy activists to fight contraction of the U.S. Postal Service, which would eliminate several hundred union jobs and adversely affect mail delivery in the state.

As Blum explains, these “cuts would be devastating for elderly, rural and low-income Vermonters who depend on the reliability and affordability of the mail, and for whom the post office functions as a social link. It’s often the place where people interact with neighbors, petition for ballot measures and swap news, the kind of space that’s made small-town Vermont so famously democratic.” Such nonelectoral activity on behalf of a key labor and community cause barely registers on the radar screen of Vermont Democrats.

Vermont State Labor Council Secretary-Treasurer Traven Leyshon, who also serves on the VPP’s state coordinating committee, says, “Local labor leaders are now willing to support Progressive candidates over Democrats — when they’re credible — because of such pro-labor stances.” In some cases, he said, rank-and-filers have had to overrule the safer, more conservative candidate endorsements favored by their own union lobbyists and political directors.

This small insurgency from below, in Vermont’s public sector-oriented labor movement, mirrors the VPP’s own trajectory in state politics. In a fashion that one hopes is not too exceptional, Progressives have moved from the margins to Montpelier, from also-ran status to a sometimes influential role in state and local government. If there was more Left partying like this going in other states, at least one of our two major parties might feel greater pressure to better represent its own badly treated working class constituents.

Steve Early was a longtime New England organizer for the Communications Workers of America, a union that has supported Vermont Progressives and Working Families Parties. He is the author of The Civil Wars in U.S. Labor from Haymarket Books. This piece was first published at In These Times. Republished with the author’s permission.