Out of Ashes of Prop 98’s Defeat, a Statewide Tenants Movement Emerges 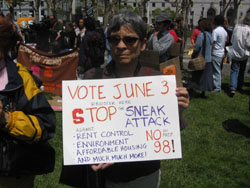 When tenant activists learned that Proposition 98 had qualified for the expected low-turnout June 2008 ballot, many feared that rent control would not survive. Although a statewide ballot initiative to abolish rent control was handily defeated in 1980, as was a later effort to prohibit mobile home rent controls, insecurity about tenants’ statewide political clout persisted. Prop 98’s landslide defeat puts such doubts to rest. In a campaign that became primarily framed by voter attitudes toward rent control, Prop 98 was resoundingly defeated by over a 60-40% margin (75% voted no in San Francisco). The question now is whether tenant advocates can build on this success by creating a powerful movement that can win victories for tenants through the State Legislature and statewide ballot measures.

As activists express relief at the one-sided defeat of Prop 98, thanks must go to the San Francisco Tenants Union and Tenants Together for coordinating campaign work locally and for the Coalition for Economic Survival for doing likewise in Los Angeles. And while I was initially a bit skeptical of the high-powered Sacramento campaign consultants who ran the statewide No on 98 campaign, Kathy Fairbanks and her colleagues at Bicker, Castillo & Fairbanks did a remarkable job.

For all of the grassroots literature dropping and phone calls, the No on 98 campaign had something that tenant campaigns never have: millions of dollars. Pro-tenant radio ads played on commercial stations, and there is no point obscuring the fact that powerful development interests threatened by the initiative, particularly those involved with water projects, provided a non-repeatable level of money to the fight to save rent control.

But acknowledging that tenants cannot hope to ever raise the millions used by No on 98, voters across the state told pollsters they favored rent control prior to any of this money being spent. Support for rent control extended beyond protected tenants to include homeowners and voters in cities without rent control.

This means that rent control is firmly understood as an economic fairness issue. And that, like an increased minimum wage and mandatory paid sick leave, protections for tenants has become a broadly popular issue.

The No on Prop 6 Model

The question is whether activists can use the No on 98 campaign as a springboard for a broader, more politically powerful tenants movement. The model for this would be the November 1978 Briggs Initiative, Proposition 6, which would have barred lesbians and gays from teaching in public schools.

Harvey Milk led the successful statewide fight to defeat Prop 6, and the No on 6 campaign brought an entire new generation of gay activists into politics. Many of these activists stayed politically involved, changing the political dynamics of San Francisco and ultimately the nation.
While the No on 98 campaign did not have the transformative impact of No on 6, it has put tenants issues on the statewide map (helped by the fact it was one of only two statewide initiatives on the ballot). It has also built working relationships across the state that should be nurtured in the months ahead.

Prop 98 has created an opportunity to rebuild and expand a statewide tenants movement.
While the initiative campaign is over, the underlying affordability crisis and risk of eviction for millions of the state’s tenants remains.

Dean Preston formed Tenants Together to help build a statewide tenants movement, and Prop 98 enabled the group to make some important statewide contacts. This network of groups, coupled with California ACORN and its community and labor allies, represent a potentially powerful statewide tenant constituency.

Other developments make the boosting of a statewide tenants movement particularly ripe.

In Los Angeles, tenant power has grown steadily in recent years, and skyrocketing rents have politicized tenants across the state. This means more state legislators have constituents impacted by tenant issues, facilitating passage of state legislation.

The change in state Senate leadership—from Don Perata to the strongly pro-tenant Darrell Steinberg—enhances opportunities for tenant legislation in 2009. So does the victory last night by Mark Leno, who has been tenants leading advocate in the State Assembly and who will have even greater clout next year as a State Senator.

But taking advantage of this improved political climate requires expansion of the statewide tenant base, which requires activists to continue outreaching to organizations across the state rather than remaining satisfied by Prop 98’s defeat.