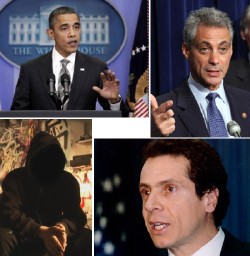 As we look into our crystal ball, the events of 2011 are becoming clear. The biggest story will be President Obama’s “new” relationship with Congressional Republicans; as if the president had not reached out to obstructionist Republicans from the start. We will be deluged with stories describing the “idealism and vision” of newly seated House Republicans, despite their allegiance to large corporations and goal of restoring failed Hoover-era policies. Governors Cuomo and Brown will be spotlighted as they move New York and California beyond the wreckage left by their predecessors, the Oscar hype will overwhelm 2010’s less than great films, the San Francisco Giants and Boston Red Sox will make World Series runs, and a week will not pass without a news report on how cellphones / Facebook / Foursquare / Twitter et. al. are bad for kids. Here’s some of what else to expect in 2011.

After the news cycle in 2009-10 was dominated by Democrats efforts to implement candidate/President Obama’s agenda for change, 2011 will re-circulate the same type of stories/issues/conflicts that we saw during the post-1994 Clinton presidency. Get ready for endless pieces on how Republicans are attacking the President’s agenda, with much attention given to extreme Republican measures that have no chance of either getting through the Senate or avoiding a presidential veto.

This framing predominates because it serves both Obama’s and Republican interests. Obama secures Democratic and independent loyalty as the bulwark against Republican extremism (see Clinton, Bill 1995-96); Republicans energize their base without actually enacting measures that hurt their wealthy donors.

The role of Obama/Democratic Party as finger in dike holding back GOP extremism also helps fill the coffers of progressive advocacy groups. These organizations have historically found it easier to raise money in response to fear of Republican policies, than to help build support for progressive goals.

Consistent with this prevailing frame, expect saturation coverage on negotiations for lifting the debt ceiling, and on the 2011-12 federal budget. But only progressive media will emphasize the hypocritical silence of Pete Peterson and other rich deficit “hawks” enjoying deficit-escalating tax breaks while demanding cuts in programs that serve human needs.

Since the media is more interested in elections than policies, expect intense coverage in 2011 of the Republican presidential race. Mike Huckabee’s latest speech will be far easier to find than stories of rising income inequality, hunger, or homelessness – problems which will worsen in 2011.

And the attacks on public employees which escalated in 2010 will reach a crescendo in 2011. After all, those opposed to raising taxes on the wealthiest or on big corporations need scapegoats to divert attention from their own responsibility for our fiscal crisis.

By mid-2011 it will feel like the 2012 election campaign is already in high gear, and if you thought the 2008 Democratic primary went on forever, get ready for the media’s saturation coverage of the upcoming debates between such intellectual heavyweights as Mike Huckabee, Mitt Romney, Sarah Palin, John Thune, Tim Pawlenty, and, if we are lucky, Haley “White Councils supported civil rights” Barbour.

2011 will continue the media’s obsessive analysis of legal challenges to the federal health care law, and this will intensify as cases rise through the appellate courts. These stories are designed to convince Americans that these rulings are based on legal or constitutional principles, and not the political views of the judges, when the truth for the current Supreme Court and far too much of the incumbent federal judiciary is exactly the opposite.

I predict that New York Governor Andrew Cuomo will be the most decisive and effective leader the state has seen in decades (yes, I realize that does not say much). He was far and away the best HUD Secretary in history, aggressively battles (some would say runs roughshod) over opponents, and knows how to get things done. Progressives and grassroots activists will have their share of run-ins with Cuomo – but given the longstanding mess in Albany, Cuomo will earn high marks in 2011.

I wrote on November 29, 2010 that incoming California Governor Jerry Brown would “aggressively push change,” and my assessment that he would hit the ground running has already been confirmed. Brown has already stated that he will announce a budget as soon as January 10, get a budget passed in March with draconian cuts, and then schedule a special election that would give voters the chance to raise taxes to offset many of the reductions.

The media (and voters) will celebrate Brown’s refusal not to push tough budget decisions down the field, and he also benefits from the dramatic contrast to seven years of drift and disengagement from his politically incompetent predecessor. When Brown publicly announces his budget, check his cuts to the prison industrial complex, the ripest area for savings but Brown has backed costly prison budgets in the past. If Brown gives the prisons a pass while sharply cutting schools, expect major progressive backlash.

Unfortunately, Rahm Emmanuel is so far ahead in the Chicago’s mayor race that he has eliminated what would have been a great national story: a rising political star goes to DC and when he returns is unable to gain traction with local voters. The national media has lost all interest in Los Angeles Mayor Villaraigosa, and New York City Mayor Bloomberg lost a year of stories about a possible presidential bid when he told local residents that the holiday snow storm was not a problem because people could still get to Broadway shows.

The San Francisco’s mayor’s race will get little attention until Labor Day, with the prior focus on how the progressive supervisor majority addresses the staggering ($500 million?) budget deficit.

Expect a blizzard of silly local and national stories about San Francisco’s interim mayor, as it fits the popular East Coast stereotype of the city as host to offbeat, quirky and “only in San Francisco” events.

A very interesting local political story in 2011 occurs in Oakland, where new mayor Jean Quan is trying to implement a broadly democratic decision and policy-making process that has never been tried in that city (or most other places, for that matter). Expect the Chronicle and other daily print newspapers to go after Quan if she starts challenging some of Oakland’s longstanding sacred cows.

To put it mildly, 2010 was not a banner year for memorable films. This means even more money must be spent on the already out of control Oscar hype machine. Expect a massive spending spree for The Social Network, which at least connects to the real world. A campaign will also be waged for Toy Story 3, my personal choice for Best Picture, and certainly the 2010 film that provides the deepest understanding of aging and our consumer society.

But we will also see major campaigns for True Grit (only remembered for John Wayne’s undeserved Oscar, and if you ever feel this right-wing super-patriot who, unlike Jimmy Stewart, avoided World War 2 to advance his career, deserved any favors you need to read John Huston’s description of Wayne or the many books about him), The Fighter (I like the comment that it is one of the best of the 52 boxing movies since Rocky), and for other films and actors whose contributions lack historic luster.

Here’s my advice to the Oscars: nominate Banksy’s Exit Through the Gift Shop for Best Documentary, which could provoke the genius artiste (and I do not use that term lightly) to take some actions – at no cost to the industry – that will increase interest in the awards show. Should the film win the Oscar, which it richly deserves, that will become the news story about the night.

Finally, I see good times ahead for our San Francisco Giants, and let’s stop acting as if expecting such is a jinx. Never in memory have the Giants been a greater favorite to win their division, and to enter a playoff series where their pitching and clutch hitting can dominate. It’s too soon to predict another World Series, but they will at worst play for the National League Divisional Championship.

The Giants and Red Sox have both benefitted from Adrian Gonzalez’s, the San Diego Padres best player in 2010, moving to the Sox. This helps the Giants win the West by weakening the Padres and enables the Red Sox to outpace the Yankees and head to the American League Divisional Championship.

I’ll leave the rest of what my crystal ball uncovered for 2011 as a surprise.