OUR MAN IN MAINE: Organizing the Last-Minute Push 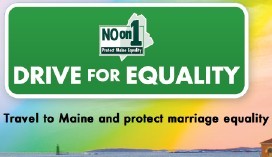 SOUTH PORTLAND – I arrived in Maine yesterday for the last week of the campaign, just as Daily Kos released a new poll showing Question 1 behind 48-47, a statistical dead heat. Every vote will count, and it will be all about turnout. I am working out of a hotel in South Portland for the next five days, where volunteers from neighboring states are coming through our Drive for Equality program to get their assignments for the “No on 1” campaign’s get-out-the-vote operation. Predictably, the opposition is trying to make out-of-state volunteers an issue – but it’s important to keep a few numbers in perspective. Of the 8,000 volunteers that have helped the “No on 1” campaign, only 200 have been through the Volunteer Vacation program (where out-of-staters spent a week in Maine to help out.) This weekend we hope to get 500 volunteer shifts through “Drive for Equality.” Marriage equality advocates are coming from across the country, but the vast majority of volunteers are Mainers. Meanwhile, 62% of the “Yes on 1” campaign is funded by a New Jersey based organization that refuses to disclose where its money comes from.