OUR MAN IN MAINE: “No on 1” in Good Shape on Mid-Coast 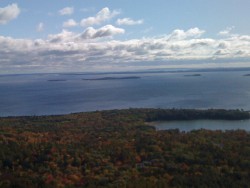 BANGOR — I did not write a Beyond Chron story yesterday, although I had planned on it. The trouble with covering such a huge swath of Maine is that you can end up spending the night in a different town than you had planned. I left Bangor Wednesday afternoon for a phonebank in Rockland – and after 62 miles in the pouring rain on a two-lane road, I felt it was not safe driving back after dark under similar weather conditions. The “No on 1” campaign found me a place to stay in Rockland, but – and I realize this is shocking for Californians – most people in the small coastal town don’t have Internet access at home. But I took advantage of my time in the region to check out Maine’s Mid-Coast, and am optimistic about our chances. Again, it’s all about convincing “No on 1” supporters to vote early. Meanwhile, “Yes on 1” signs have started to pop up. But signs don’t vote – and if their distribution method is any indication, it’s more about putting on a show – than any grassroots support from people who vote.

As I explained before, the Bangor office of “No on 1” is responsible for effectively two-thirds of the state’s land mass – Penobscot, Arostook, Washington, Hancock, Pistacaquis, Lincoln, Waldo and Knox Counties. Much of this includes the state’s most conservative pockets, but it also has Maine’s Mid-Coast with many seaside towns that attract tourists. I had asked myself before coming if Maine was like California’s Humboldt County (“hippies and rednecks”), and Rockland – with its string of art galleries – suggests that analogy. And the buzz I saw on the Mid-Coast painted a far different picture than further up north.

“No on 1” has a wholly volunteer-run office in Rockland, and six people were making volunteer recruitment calls when I arrived. People I called were very receptive, but I’ve never had someone tell me their availability to help the campaign depended on when they have to milk their goats. Others told me they were building a new house, and I think they meant that literally. The office had a more laid back vibe than what I had seen in Portland and Bangor, but the campaign tells me Knox County is doing well for voter outreach and identification. Just like the rest of the state, the focus there is on making sure supporters vote – and that they vote early.

I left Rockland yesterday to take a leisurely drive up Route 1, where I stopped for lunch to have lobster. Later that evening, the Bangor office had a phone-bank. I was given a call sheet of voters from Mount Desert Island – just further up on the Mid-Coast, 85 miles east of Rockland in Hancock County. While the “Yes on 1” attacks have somewhat softened our support in Bangor , it has probably helped us on Mount Desert Island. Voters I spoke to from that area last night were outraged by these attacks, and while they are used to voting on Election Day – and it was still tough getting them to agree to voting early – a few just might out of anger.

Another thing I saw on the drive back from Rockland yesterday was “Yes on 1” signs – which are slowly but surely popping up. But I only saw two of them actually placed in people’s front yards (one in Rockland, and another in Winterport), whereas the rest were placed on the curb. If there’s any indication about the pattern, it seems like the opposition is kicking off an Astroturf campaign for visibility.

“Stand for Marriage Maine” – the campaign committee to pass Question 1 – sent out an e-mail to their supporters on Wednesday, announcing who their contacts were for yard signs in various towns and cities in Maine. But the selection had very little to do with population – i.e., where voters live – and more to do with land mass. For example, they had no point-person for yard signs in Portland – but three in Arostook County. One can argue the former is liberal, while the latter is conservative – but it also appears that “Yes on 1” is aiming more for a general visibility blitz, rather than any grassroots support.

It’s an old adage in political campaigns that “signs don’t vote.” Volunteers who feel they are helping the campaign by making signs rather than phone calls fail to appreciate that what wins or loses an election is which side is able to get their voters out. That’s why the successful campaigns – such as Obama last year – don’t make signs a priority. And so far, it doesn’t seem to me that the sudden burst of yellow “Yes on 1” signs – with three at a curb in Downtown Bangor, a few blocks from where I’m staying – suggests an effective grass-roots presence.

What’s going to win this election – especially with the low turnout predicted – is which side is getting their people out. And banking early votes, which the “No on 1” campaign is doing effectively, will go a lot further than a sudden appearance of campaign signs.

EDITOR’S NOTE: Paul Hogarth is helping to run Travel for Change, which helps bring out-of-state volunteers for the “No on 1” campaign to Maine with money and donated airline miles. Now, Drive for Equality is up and running to organize East Coast volunteers who wish to take day (or weekend) trips to Maine by self-organizing into carpools. Check it out …