OUR MAN IN MAINE: Defeating Question 1 About Mobilizing Base 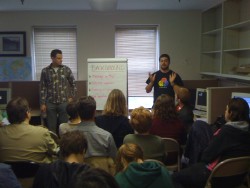 PORTLAND — If every Mainer votes in the upcoming election, Question One will lose – and conservatives who’ve won on “gay marriage” in every state where it has been on the ballot will suffer a humiliating defeat. But this is an off-year election, and young people who strongly support marriage equality are much less likely to turn out. And while voters in liberal Portland are with us, I have gotten this apathetic shrug from people – saying it shouldn’t even be on the ballot. That’s why “No on 1” has focused on turning out the base – persuading them to vote early so we have these votes in the “bank.” The campaign has an impressive field operation – and a skilled campaign manager with a proven track record. But to win on November 3rd, we need a ground game everywhere – which is why I’m driving up to Bangor this morning to check out their field office there, and help them for the next seven days. With more volunteers to make this possible, the campaign will successfully pull it off.

I’ll have to admit that in two days, I really haven’t seen much of Maine yet. For one, I still haven’t left Portland – which if you’ve never been is a charming town. Second, it’s been raining pretty much non-stop since I landed Saturday morning – so the only time I saw Maine’s legendary fall colors that everyone raves about was from my airplane window. That will change today, when I take the two-hour drive to Bangor.

But I’ve been here long enough to make an initial assessment of the “No on 1” effort. Mainers are “live-and-let-live,” and if voting were mandatory Question 1 would fail. A Democracy Corps poll of registered voters last week had us winning 50-41, but a Daily Kos poll of likely voters from two weeks ago had us losing 46-48. I’d feel better if this was on the ballot in November 2008, but it’s November 2009.

There are three reasons, however, why I remain optimistic: (a) Maine has same-day voter registration, (b) the “No on 1” campaign has an impressive team that has done its homework and (c) a push for people to vote early now can give “No on 1” a good head-start – allowing them to focus on that tiny sliver of voters who are undecided.

Of course, same-day voter registration isn’t the focus right now – besides organizing college campuses (which I hope to report on in a future article.) The current priority is getting registered voters who are already with us to “vote early” – which they can do thanks to Maine’s very lenient absentee balloting law. Anyone can go online to request an absentee ballot, and last night’s phone-banking was calling Portland voters – and walking them through the process.

The first crop of Volunteer Vacationers get the Orientation Training.

But despite it being easy to vote absentee, Maine doesn’t have an early voting culture that California voters have become accustomed to. An intense effort is needed to get supporters out early, and the campaign has laid the proper kind of groundwork. Thirty-five percent of Mainers voted early in the last election. Our goal to defeat Question 1 is to bump this number up to 40%.

For two decades, gay rights has been on the ballot in Maine repeatedly. But not until 2005 did the LGBT community prevail, when they successfully defended the state’s anti-discrimination law. Seeing correctly that marriage equality would be the next big fight, organizers have worked hard for the past four years – culminating with the passage of a gay marriage bill in this past May. It was not a backroom deal with legislators and lobbyists. There were 11 hours of public testimony, mostly in favor.

To prepare for the legislative campaign, organizers last November stood outside polling places – asking voters to sign pledge cards in support of marriage equality. The idea was to capitalize on the huge turnout for Barack Obama to build a base in swing districts. They got over 30,000 cards signed that day (after initially only printing 10,000) – and by the time the Governor signed it they had gotten 50,000.

Of course, just because those people voted in 2008 doesn’t mean they will vote again in 2009. But now the campaign has their contact information, and can hound them until Election Day. Explaining that voting early helps the campaign save resources by allowing us to focus on undecided voters – and stop calling them! – was a very effective talking point at last night’s phone-bank. I spoke to a lot of voters who had never thought about voting absentee, until I explained how easy the process was.

Still want the satisfaction of going into the polling booth? Starting October 15th, early voting in person – at your local city clerk’s office – will begin. That’s what we tell people when they refuse to mail in a ballot. One woman said she wanted to bring her kids to vote to teach them about democracy. Thanks to us, she’ll vote on the 15th.

Will the campaign have enough volunteers to pull this off? Yesterday, 20 of us came from out-of-state for the first week of “Volunteer Vacation.” After an orientation, we went across the street to do phone-banking – where we joined a large group of Maine volunteers to help make it one of the campaign’s most productive phone-banks yet.

Most of the “Volunteer Vacation” people are staying in Portland – or in York County at the southern tip of the state. Makes sense, because those are the more liberal areas.

But I’ve requested Bangor, because I want to see what it’s like in the rest of Maine – something the “No on 8” campaign never did outside of California’s liberal bastions. Even in more conservative places, you will always find a handful of voters on your side – and mobilizing your “base” means a targeted approach wherever you can find votes is essential. What we need are volunteers for the campaign to be everywhere.

EDITOR’S NOTE: Paul Hogarth is helping to run Travel for Change, which helps bring out-of-state volunteers to Maine with money and donated airline miles. In the next few days, the site will launch “Drive for Equality” to organize carpools in nearby East Coast states for day and weekend trips to Maine. Please stay tuned …