Will David Chiu Try to Protect SF’s Most Vulnerable Tenants? 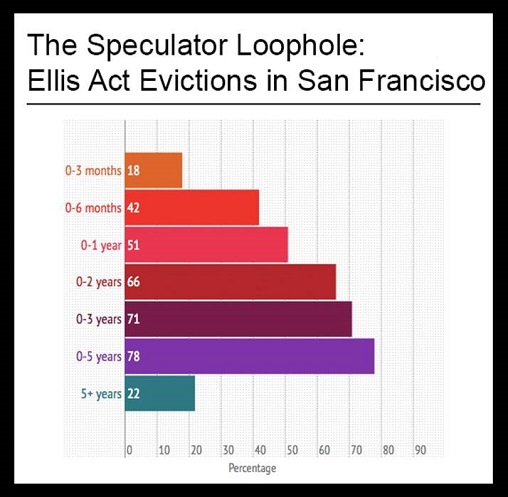 The campaign for Ellis Act reform has gained enormous support across California. But the campaign still needs a legislator to sponsor the bill prior to Friday’s bill deadline.

In the past, San Francisco legislators have filled that role. John Burton and Mark Leno led all major Ellis Act reform campaigns over the past two decades. That’s why San Francisco tenant and housing groups are urging Assemblymember David Chiu to lead the fight this year. Chiu heads the Assembly Housing committee. His assembly district has the most Ellis Act evictions of any in the state.

Ellis evictions in San Francisco, Oakland and most of the state are not covered by any eviction moratoriums. The Tenderloin Housing Clinic alone has been working with 252 individuals facing Ellis Act evictions, while Oaklandside has reported on East Bay tenants facing eviction in the middle of the stay at home order.

Why do California legislators allow elderly, disabled and other long-term tenants to be evicted by real estate speculators? What policy goal is served? These evictions cause untold human misery and worsen California’s affordability crisis.

As the chart above shows, a bill imposing a 5-year holding period prior to invoking the Ellis Act would slash these evictions. Such a bill passed the Senate in 2014 and narrowly lost in an Assembly committee; the political dynamics for passing reform are much stronger in 2021.

We have spoken with legislators and their staffs across the state and support for Ellis Act reform is stronger than ever. But because there has not been a major Ellis reform effort for six years, many legislators do not feel familiar enough with the issue to lead a statewide campaign. San Francisco’s David Chiu has been dealing with Ellis evictions since he was a supervisor. His local legislation restricting new garages in North Beach helped reduce Ellis evictions in a neighborhood that was once speculators chief target.

But Chiu has been reluctant to follow the lead of prior San Francisco state legislators John Burton and Mark Leno in sponsoring Ellis Action reform. And if he doesn’t act in the next few days, speculators will continue displace 90-year old long term tenants paying below-market rents so they can permanently eliminate their rent-controlled housing.

San Francisco’s plunging rents has been accompanied by rising home prices. This increases speculator incentives to replace rent controlled housing with units they can sell at a quick profit. Absent action in next few days, San Francisco’s Ellis Act crisis will get much worse.

Legislators have been hearing our calls, but they need to hear from you.

Help us in our fight to reform the Ellis Act with the following action items:

More information about our call to action is linked here.