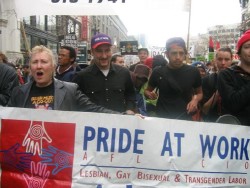 Yesterday, the California Labor Federation, SEIU-UHW and over 50 labor organizations representing more than two million workers in the state filed an amicus brief supporting the lawsuit to overrule Proposition 8. Labor and the LGBT community have long worked together to build alliances; and in a conference call yesterday, UHW’s Sal Roselli said this was the “first step to building a permanent progressive majority” in California. By allowing just a slim majority of voters to take away a fundamental right from a discrete minority, Prop 8 sets a dangerous precedent that jeopardizes equal protection for any group (like union members) – which is why labor leaders said they joined the lawsuit. But while pundits and legal observers talk about the “queer-labor” alliance and its political potency, it’s important to remember that many of these union members are in committed same-sex relationships – making organized labor a natural ally in this struggle.

In recent months, the media obsessed about how demographic groups voted on Prop 8 – including the (wildly exaggerated) statistics about black voters, as if there are no gays in the African-American community. Now there will be much ado about how the potent labor community has joined the LGBT struggle to overrule Prop 8 – ignoring the point that labor and the LGBT community are both diverse (and overlapping) constituencies.

Art Pulaski, Executive Secretary-Treasurer of the California Labor Federation, called marriage equality in yesterday’s conference call a significant workplace right. “When you look at health and welfare benefits provided by legislation,” he explained, “those are available in traditional marriages – but not domestic partners. Unions can negotiate with employers to be sure that domestic partners get included, but that’s only a negotiating point – it’s not guaranteed. We’re saying that’s not fair. Benefits should be available.”

When asked by reporters how the union would respond to rank-and-file members who supported Prop 8, Sal Roselli acknowledged they do have some Republican members, as well as religious members. “But the bottom line is our leadership feels it’s important to lead, and take positions on issues even if controversial – if they are right.” And for even union members who are not gay, if the courts allow Prop 8 to stand, no group is safe from a discriminatory amendment that a bare majority of the electorate chose to approve.

The brief itself raises most of the same issues made in the original lawsuit – that Prop 8 is a drastic “revision” to the California Constitution that deprives a suspect class of a fundamental right under equal protection. So the impact of this amicus brief will not be so much legal, as political. The Supreme Court now knows that the weight of organized labor – and the two million working people that it represents – is on the side of marriage equality. And this will have an impact in affecting the final outcome.

As I’ve written before, just because our side has the better legal arguments doesn’t mean the Supreme Court will repeal Prop 8. We like to believe that logic and reasoning wins the day in court, but the Justices won’t overturn the “will of the people” unless they’re convinced it’s a politically safe thing to do. Spontaneous street protests sent the message that people were angry, and were willing to self-organize to demand change. It convinced the Court that if they repeal Prop 8, a lot of people will have their back.

Fifty labor organizations joining the lawsuit against Prop 8 will have a similar effect.