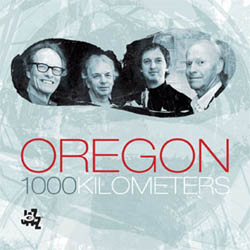 For over 35 years Oregon has been personifying their own way of making music, which is a natural meeting point between diverse sounds and equally diverse cultures. The music by this American quartet is always one without boundaries, an adventurous fusion between jazz, chamber atmospheres and folkloristic scents coming from various latitudes and longitudes. But Oregon’s music is also one where composition and improvisation find the right balance, in the depth of a profound melodic breath that in the course of time has remained one of the principle characteristics that distinguishes the group. This weekend, Oregon will debut their newest album, “1000 Kilometers” at Yoshi’s on Fillmore.

“1000 Kilometers” is the second album by Oregon for CAM Jazz, after “Prime”, released by the Italian label in 2005 and greeted by the international press as the awaited album comeback by the glorious group. All the tracks on the new CD are newly written and, for the most part, by guitarist Ralph Towner who, for the occasion, also plays the synth guitar, the piano and the keyboards.

But there’s space for the other two long-time members of Oregon, wind-instrument player Paul McCandless and bass player Glen Moore, as well as drummer/percussionist Mark Walker, let alone for two collective improvisations. Walker, having joined the group as a permanent member in 1996, writes the track that opens the CD, Deep Six, which genius melodic design rests on insistent rhythmic themes. The track From A Dream follows, a tasteful entr’acte of classical style, and Catching Up, another episode that encompasses the truest spirit of Ralph Towner and his partners.

The long, evocative title track is dedicated, as is the entire album, to Thomas Stöwsand, who for more than thirty years managed Oregon, and who was a great friend to them and to many other musicians as well. But the most significant moments on “1000 Kilometers” certainly don’t end here, a testimony of the rediscovered creative vein that has brought the group to express themselves on highly qualitative levels, though already shown on the previous album “Prime”.

To reconstruct the historical roads that Oregon has travelled, one would have to go as far back as the Sixties, the period in which Ralph Towner and Glen Moore attended the University of Oregon and began their collaboration. After having both spent some time in Europe, further intensifying their musical studies, the two unite with singer-songwriter Tim Hardin, and with him they perform at the Woodstock Festival. The later meetings with multi-talented Collin Walcott, first, and with Paul McCandless, shortly after, would later bring them to form the group Oregon, however not before mutually belonging to the Paul Winter Consort. The official debut of the new quartet took place in 1971, under the name of Thyme-Music of Another Present Era, soon renamed upon McCandless’ suggestion.

Vanguard and Elektra were the first labels to document the quartet’s innovative sound intuitions, which were then recorded, in the Eighties, by ECM. In 1984, the sudden loss of Collin Walcott in a car accident deeply scarred the existence of Oregon, who then continued their artistic journey with the Indian percussionist Trilok Gurtu. After Gurtu left the band, Towner, Moore and McCandless went on to record two trio albums. The arrival of Mark Walker brought the quartet back together and Oregon picked up strength, recording a few albums for Intuition before entering the always more numerous and fortified team of CAM Jazz.