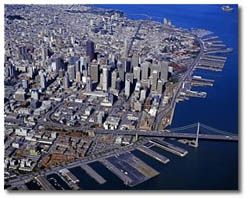 While the ‘fiscal feasibility’ of the Mills Mall project was the stated purpose of Monday’s special Board of Supervisor’s committee hearing, what really revealed itself was the strikingly broad opposition to the project. Even if the Mills Corporation had managed to prove the financial soundness of their development proposal for Piers 27-31yesterday – which they didn’t – the parade to the podium of some of the city’s most respected activists and residents denouncing the mall provided what may be the death knell for the project’s future. Mills took out a scathing full page New York Times ad Monday personally attacking Supervisor Aaron Peskin, and claiming the hearing would be a ‘Kangaroo Court’. Instead, San Franciscans saw a passionate, well-organized, grassroots campaign opposed to building a shopping mall on our city’s waterfront.

Peskin called yesterday’s hearing to get answers to several important questions regarding financing for Mills’ $218 million project. In particular, he called into question the proposal’s plan for financing a new YMCA center as part of the development.

Mills’ proposal calls on the YMCA to contribute $30 million in capital costs, and offers to loan them the money. The proposal does not, however, explain how the YMCA – an organization only able to raise a total of $26.1 million in capital funds since 1986 – would pay the money back. Nor does it explain how they would pay the millions per year in operating costs the center would necessitate.

The hearing also revealed that Mills’ proposal relies heavily on revenue from 165,000 square feet of new office space being built as part of the project. However, Peskin pointed out that millions of square feet of office space currently sits vacant throughout the city, including 4.4 million square feet downtown, along with 865,000 square feet in the Jackson Street area, near the waterfront. These figures, he argued, raised serious concerns that Mills would be able to fill the new space with tenants.

Other than claiming that should the YMCA default on its payments, the Port would take the building over, as well as arguing that the office space had views of the water, so would be extremely desirable, the Mills Corporation did little to allay Peskin’s concerns.

In fact, most of the defense of the agreement came from the Port Commission, which worked out the proposal for Piers 27-31 with Mills and which hopes to solve its budgetary woes with the deal. A lone Mills representative was on hand at the hearing, and spoke little, as the corporation had eliminated its need to defend the project’s fiscal feasibility by relinquishing $2.1 million in public funding going towards project last Friday.

Even without considering the serious questions raised about the project’s bottom line, yesterday’s hearing revealed widespread discontent with the Mills Corporation’s proposal, with LGBT activists, neighborhood residents, environmentalists, parents of inner-city children, and even one of San Francisco’s former mayors lining up to urge the Board to kill the plan.

Carla Ellis, a 25-year resident of San Francisco, told the story of losing her son at a YMCA due to insufficient safety there. She asked why the YMCA would spend $30 million on a new facility near North Beach when it couldn’t keep its current facilities – particularly those in low-income communities – safe, clean, and fully functioning.

Michael Goldstein, representing the Harvey Milk LGBT Democratic Club, asked San Francisco why it would allow development on public land by a corporation that gave thousands of dollars to eight right-wing state politicians, each of whom either endorsed a statewide anti-gay marriage bill or actively opposed a recent bill to legalize gay marriage.

Susan Tibben, a local artist, asked why the city would force out the wide variety of small businesses already operating at Piers 27-31, including the business that builds all the floats for the annual Chinese New Year’s parade.

John Rizzo, the chair of the Sierra Club’s local chapter, asked why the Board of Supervisors would pass a proposal for development that would be built directly on top of a sewer overflow discharge, without any guarantees by the builders that public health would be protected.

Judith Berkowitz, from the Coalition for San Francisco Neighborhoods, asked that the city make her group’s suggested changes to the proposal before they even consider passing it. Those changes include resident’s concerns about ensuring traffic doesn’t build up around the new development, that adequate public transportation gets provided, and that the public be provided more open space to enjoy.

And former San Francisco Mayor Art Agnos, speaking to the Board for the first time since 1992, said approving the deal would be the second worst vote ever made by the Board of Supervisors. The worst, he said, was approving a double-decker freeway on the Embarcadero in 1953, a freeway whose demolition created the ability to even consider providing the public space at Piers 27-31.

Minutes after the hearing began, Supervisor Chris Daly made his views clear – that regardless of the project’s fiscal feasibility, he would vote it down, for many of the reasons outlined by yesterday’s speakers. Most of his colleagues will likely do the same.