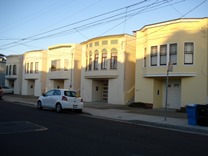 The March 24 Board of Supervisor’s Land Use and Economic Development hearing on legislation legalizing in-law units faced substantial opposition from a host of homeowner’s and apartment associations. Such opposition could again stifle progress in addressing this long overdue strategy for addressing San Francisco’s housing crisis.

The legalization of in-law units has been tried many times over the past decades, but has thus far been unsuccessful. With a growing affordable housing crisis, this legislation would provide increased protections for tenants already living in the reported 40,000 in-law units across the City.

Under the legislation proposed by Supervisor David Chiu, existing illegal in-law units would be given a voluntary option to obtain proper permits for legalization. Homeowners would be able to have their home prescreened by the Department of Building Inspection to see if their unit would be eligible. Additionally, there would be no penalty for units that would not be able to make proper building code.

In-law units are typically considered to be a viable source of affordable housing in the City, and many are covered by rent controls. However, because they are technically illegal, tenants who live in them are not guaranteed the same rights as other renters. Legalization of these in-law units would increase life-safety and also provide tenants greater rights and protections. Chiu said that in-laws account for around 10% of the city’s total housing stock, and providing a path for them to become legal would greatly address the city’s housing crisis.

“We are the midst of a housing affordability crisis,” Chiu said. “We’ve had skyrocketing eviction rates. And we’ve had too many San Franciscans pushed out of our city.”

At the hearing, though, opponents, primarily from District 7, came out in full force to reject the legislation. They spoke of the detriment that legalizing in-laws would have for neighborhood character and the risk of speculative investors capitalizing on increased property values. Commenters spoke of how increased density would jeopardize the character of the single-family neighborhoods they all lived in. They spoke, too, of the conflicts that imposing a citywide ordinance would have to existing private neighborhood covenants.

Some offered amendments to the legislation like including a cost-passing measure so homeowners would not have to bear the entire burden of renovation costs.

Their concerns seem to have raised doubts for Supervisor Jane Kim who questioned the lack of benefits and incentives that would compel a homeowner to volunteer to make their unit legal. Kim also questioned the benefit that tenants would gain if legalization of units could also mean higher rents.

Still, Chiu believes that the legislation strikes a balance between homeowners and the need for affordable housing.

Chiu noted that the vast majority of those living in in-law units were some of the City’s most vulnerable.

“They often house some of the most vulnerable San Franciscans: immigrants, seniors, families with many children, some of the lowest-income, and some of the longest-term residents,” Chiu said.

Ted Gullicksen of the San Francisco Tenants Union says that this legislation would provide tenants living in in-law units full tenant protections. He said that tenants currently are unable to bring complaints to the Rent Board and, because of their precarious living situation, have little protection against illegal rent increases and threats of DBI inspection.

“There are thousands of illegal units and tenants in them don’t really have full rights,” he said. “They really need to get full tenant protections, and this legislation would do that.”

“We have long advocated for in-law units as an efficient and sensitive way to increase density in San Francisco while respecting neighborhood character,” she said.

“While this proposed legislation will not actually increase San Francisco’s housing supply, it will maintain an existing source of affordable housing,” she continued.

The Committee voted to push the legislation without recommendation to the full Board next week, with Supervisors Cohen and Kim unsure about their position.