Open Letter to Workers at Santa Rosa Memorial Hospital: Why Do SJHS and SEIU Fear a Free and Fair Election? 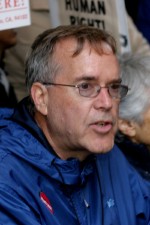 I met some of you for the first time in December 2004 at a rally with United Farm Workers co-founder Dolores Huerta, when she joined your call for St. Joseph Health System (SJHS) to negotiate ground rules for a free and fair election process. For the next four years, as an SEIU international organizer, I worked with you to build a powerful campaign that, by the fall of 2008, had convinced SJHS to sit down and negotiate.

But in March 2009, after ten years, I decided to leave SEIU. The tipping point came when I learned in February that the international union had decided in August 2008 to withdraw support for your campaign. This was at a critical moment. We had conducted our week of action in Orange County in July of that year at the SJHS motherhouse, and won unprecedented national publicity.

How did I find out that SEIU had withdrawn support for you when you needed it most? Last February, SEIU leaders from Washington took over its California healthcare local, SEIU-UHW. The campaign was suspended. Days later, over 200 SRMH workers were informed of impending layoffs. I offered to fight the layoffs alongside an experienced organizer who had spent two years on the campaign. However, this organizer was told by the new SEIU-UHW leadership, installed by Andy Stern, that SRMH workers were no longer a priority.

Several days later, a national leader of SEIU told me that SEIU could probably get a free and fair election agreement from SJHS by that June. I was shocked by what he admitted next: that the international union made a decision in August 2008 no longer to support workers at SJHS or put pressure on the system, because they did not want you to have the opportunity to vote for a union led by Sal Rosselli. SEIU broke faith and trust with you by deserting you when you most relied on them. This misconduct seriously undermined the opportunity you had to win a fair election agreement with SJHS in the fall of 2008.

Later in February, the international union learned that many of you had decided to form a union with NUHW. SEIU made a last-ditch appeal that I lead a campaign to win your trust. Because of SEIU’s breach of faith, I could no longer represent SEIU in good conscience.

I was disappointed but not surprised when SEIU rejected the offer of former Secretary of Labor Robert Reich and Monsignor Brenkle to mediate a fair election agreement, while NUHW accepted. Both SEIU and SJHS fear that if you have a free and fair election process – with no intimidation, retaliation, or negative campaigning – you will vote your conscience and select NUHW: the union whose leaders have stood by you for the past six years. SEIU’s actions have had the effect of encouraging SJHS to mount a very aggressive anti-union campaign.

SEIU has raised the issue of track record, so it is only fair to review its own recent track record. SEIU President Andy Stern is currently embroiled in costly, divisive battles on several fronts. He is waging a union-busting campaign against the union representing his own employees; he is fighting and raiding his former ally, UNITE HERE.

SEIU is bogged down in conflicts of its own making at a time when the labor movement has a once in a lifetime opportunity to make historic gains with the Obama Administration and a Democratic Congress. And now the labor movement is being tarnished, as numerous Stern protégés and appointees have been forced to resign amidst charges of rampant corruption.

Sadly, SEIU has chosen war with the former leaders of one of the most vibrant and successful healthcare unions in the country. Dissent has become equated with disloyalty.

SEIU – once the fastest growing union in the United States – has hit a wall. It has abandoned organizing campaigns at five major health systems around the country, after spending tens of millions of dollars, leaving pro-union activists vulnerable to management retaliation.

The New SEIU: Intimidation, Threats, Coercion and Even Physical Violence

Across California, prominent local leaders are joining in support of NUHW, because they know this California-based and member-led union will fight the hardest for healthcare workers. Stern’s trustee for SEIU-UHW, Dave Regan, has failed in his attempt to threaten and coerce Local 2 UNITE HERE! President Mike Casey into withdrawing his support for NUHW.

When SEIU tried the same bullying tactics on John Burton, California Democratic Party Chair and legendary champion of working people, it backfired. Burton publicly supported the character, integrity and leadership of Sal Rosselli. But SEIU reached a new low when it resorted to physical violence against the Vice President of the United Teachers of Los Angeles (UTLA) and other labor supporters of NUHW at a recent event in Los Angeles.

Not surprisingly, significant numbers of very talented staff have left SEIU. This represents a talent and idealism drain in the union that once was a beacon for idealistic young people.

The danger, of course, is that your co-workers become discouraged and vote for neither union. It has been 39 years since I went to Delano to work for Cesar Chavez. I helped organize the successful campaign to defeat the all-powerful Teamsters in the 1970s.

Today you have an historic opportunity to cast your vote for NUHW, whose leaders have a long and proud track record of building a member driven union that has won voice in patient care, respect, and the highest benefits of any healthcare union west of the Mississippi. NUHW is organized and led by the people you know and trust. Workers in over 80 healthcare facilities and systems in California are in the process of joining NUHW because they want a union that they control themselves.

Keep your eyes on the prize. You can withstand SJHS’s anti-union campaign. You will overcome SEIU’s campaign of smear, fear and futility. By voting for NUHW, Memorial Employees will have the voice you need and deserve for yourselves and your patients. It will also send a powerful message to SJHS and SEIU and inspire workers in the rest of SJHS and in Catholic hospitals across this country.

Fred Ross, Jr. is an organizer for IBEW 1245 and a longtime supporter of UNITE HERE Local 2.