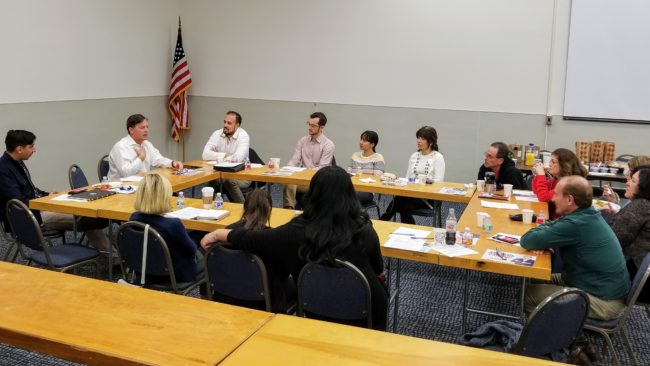 At the national, state, and even local level, union political endorsements are often made with insufficient membership involvement.

Union leaders and legislative/political directors like to get their favorite candidates endorsed, without too much debate or discussion.

Instead of giving every member a voice in such decisions, a pliant local executive board, a meeting of union delegates, or an appointed political action committee decides which candidate to back—and support financially.

As Labor Notes just reported, this top-down approach is increasingly controversial, particularly among Bernie Sanders supporters who were not consulted about their unions’ ill-fated embrace of Hillary Clinton three years ago. (See: https://labornotes.org/2019/09/members-demand-voice-their-unions-presidential-endorsements)

To avoid being by-passed again, some union activists are demanding a bigger say in 2020 presidential primary endorsements.  Now, thanks to the National Union of Healthcare Workers (NUHW), they have a good working model for making candidate endorsements more democratic, by opening up the process to all members.

NUHW represents 15,000 hospital and nursing home workers in California. Like the United Electrical Workers (UE), it’s not affiliated with the AFL-CIO. And, along with the UE, NUHW was one of only seven national unions that backed Sanders in 2016.

On Thursday, Sept 26, the NUHW announced that it was endorsing both Sanders and Massachusetts Senator Elizabeth Warren because “the union’s executive board decided that [was] the most appropriate reflection of the will of the membership.”

But, to determine the will of the members, NUHW didn’t just rely on the judgement of a few union officials. Every NUHW dues payer was invited to designate his or her first choice for president or top three picks.

This on-line voting was conducted by email or text and overseen by an outside firm. Balloting was held after information on presidential candidates was posted on the union’s website, utilizing their own responses, if any, to a detailed NUHW questionnaire. (See  https://nuhw.org/2020-presidential-endorsement/

In the results just announced, the final tally showed what percentage of the ballots mentioned each candidate’s name. The names of Warren and Sanders appeared on 61 and 50 percent of the ballots respectively, resulting in the NUHW decision “to offer grassroots support to both the Warren and Sanders campaigns” (along with a $5,000 donation to each).

Kamala Harris and Joe Biden were listed on 34 and 32 percent of the ballots respectively, while Pete Buttigieg appeared on 21 percent of the electronic votes cast.

President Donald Trump’s name appeared on 12 percent of the ballots, even though his campaign declined to answer the NUHW candidate questionnaire or send a video message to its annual stewards’ conference. (For the full tally, see: https://nuhw.org/nuhw-members-endorse-warren-sanders-president/)

At the stewards’ conference, Sanders, received the strongest audience response, followed by Warren. Both made a convincing argument that strengthening the labor movement would be a central goal of their administrations, although Sanders’ explanation of his proposed Workplace Democracy Act provided a more detailed road map for doing that.

In a later open-mike discussion of the relative merits of various contenders, some NUHW delegates, like Marie Chavez, seemed to favor a dual endorsement of Sanders and Warren.

“Bernie has really shifted the conversations were having about economic inequality and single payer healthcare,” Chavez said. “I also appreciate the things Senator Warren is doing.”

Meanwhile, Kamala Harris and Joe Biden each came under fire for a damaging faux pas involving the very union they were wooing.

In her endorsement pitch, Harris stressed her long history of involvement with California healthcare workers but made the mistake of repeatedly referring to her audience as “UHW,” rather than NUHW.

NUHW became an independent union rival to the SEIU-affiliated United Healthcare Workers ten years ago after many of its leaders were removed from office and their statewide local put under trusteeship by then-SEIU President Andy Stern. Some of NUHW’s largest bargaining units had to wage bitter fights to leave UHW.

On the issue of health care reform, Harris was similarly tone-deaf. She explained that her proposal for a “universal system that gives us choice” preserved a role for private insurers during a “10-year transition period” because union officials have urged her not to “give away our chance to negotiate on health benefits.”

That didn’t go over well because NUHW is a longtime Medicare for All supporter and heavily involved in healthcare industry disputes—including strikes– over benefit issues. None of its activists or leaders seem particularly eager to have President Harris help perpetuate these nightmarish bargaining situations for another decade.

In fact, one of NUHW’s on-going contract campaigns involves the hugely profitable but still concession seeking Kaiser Permanente. As part of a long struggle by Kaiser mental health professionals for better staffing, some NUHW members in LA picketed a political fund-raiser hosted by Dr. Cynthia Telles, a UCLA medical school professor and board member of the Kaiser Foundation.

Who was the special guest at Dr. Telles’ gathering of wealthy corporate Democrats? None other than former Vice-President Joe Biden, a regular at such “high dollar donor” affairs.

For that reason, viewers of Biden’s video message were doubtful about his claim that, “under a Biden Administration, collective bargaining and the right to organize will be a sacred.”

Several speakers recalled that Biden never responded to NUHW requests that he encourage his friends and donors in Kaiser management to settle their long-running conflict with the hospital chain’s mental health therapists.

“Not only did Joe cross our picket line, he flat out refused to even acknowledge us,” reported Kaiser worker Stacy Cohen. “He does not love us, doesn’t care about us, and he is not with us.”  After Cohen spoke, Deborah Silverman, a fellow Kaiser employee, took the floor, aired the same grievance against

Biden, and led a rousing chant—“Say No to Joe!”

According to NUHW President Sal Rosselli, this kind of open debate (and related rank-and-file endorsement vote) is essential to making political action “member-driven,” rather than leadership directed. When union activists are questioned by skeptical co-workers about how and why the union is taking political stands, they can reply, as mental health therapist Marirose Occhiogrosso does, that she’s “proud to belong to a union where we decide which candidates to support.”

To engineer an endorsement of Warren, instead of Sanders, fifty WFP local and national leaders gave their candidate preference the same weight as the total vote by hundreds of Party members and supporters who participated in an on-line presidential poll.

This “super delegate” travesty generated membership complaints, bad press in the mainstream media, and sharp criticism on the left. (See: https://www.jacobinmag.com/2019/09/working-families-party-elizabeth-warren-endorsement and https://www.jacobinmag.com/2019/09/working-families-party-endorsement-elizabeth-warren-bernie-sanders)

If unions and organizations allied with them, like the WFP, are serious about internal democracy and restoring membership confidence in their political endorsements, they need to give rank-and-file members the final say.

And that means dis-continuing their traditional top-down decision-making and not resorting to new methods similarly wired to insure the preferred outcome of the labor officialdom.

(Steve Early is the author of The Civil Wars in U.S. Labor and other books about labor and politics. He is a longtime backer of NUHW, one of the founders of Labor for Bernie, and a former supporter of the Working Families Party. He can be reached at Lsupport@aol.com.)