Once in a Lifetime Brings Amazing Hollywood Flavor to A.C.T. 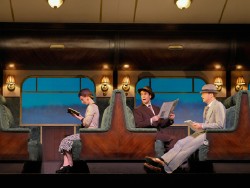 A.C.T’S production of ‘Once in a Lifetime’ is dazzling. The show is like getting on a Hollywood treadmill that won’t let you get off. Wonderful dialogue sparkles among the brilliant sets and sensational acting. Oh, if only I could have been there in those days.

A.C.T has spared nothing to bring back 1920’s – 30’s Hollywood when Gossip Columnists ruled the day. For instance, there is the hilarious take on Gossip’s like Louella Parsons and Hedda Hopper. And no one could do it better than Rene Augesen as she plays Gossip Monger Helen Hobart. She really nailed the role. Brilliant!

This is majestic staging. It’s pure Hollywood magic. Visually, there has been nothing better on the stage this year. The razor sharp actors really keep us laughing. No fear of falling asleep during “Lifetime.” This historical play by Moss Hart and George S. Kaufman is pure genius.

The wow performances in the show open fast and never slows down – and there is even a wonderful comfy train that goes by. Sure would like to be on that train.

There is so much to get excited about in this farce about romance and comedy – to eye popping exotic Art Deco scenery. And best of all, are the Actors that bring tons of wit and energy to the stage. Do you get the feeling that I love the show?

Director Mark Rucker has sent us to Hollywood in this engaging, glamorous play.

Also on the stage are wonderful old Movie Clips that were made just as ‘Talkies’ came about. Those were the days of Al Jolson — one of the first to be in a Talkie Movie.

This is THE stage play of the year. Believe me – it’s as ‘Good as it gets!’ No wonder it’s called “Once in a Lifetime!”

Briefly the story: Silent films were on their way out. The ‘Talkies’ took over in the 30’s. A Trio of Vaudeville Actors sell their act for just $500 bucks, and they take a Train to Hollywood with Ideas of opening a school for voice training. Period Film clips are incorporated on a big screen to show us what the Hollywood product looked like in those days. And it was lots of fun.

Historical fact: Jack Oakie was the star in the movie (1932). It was long considered a lost movie, but was rediscovered a few years back and appeared on KQED. It would be great to see it again.

LOVE CONQUERS ALL IN TURANDOT

It is Puccini’s last opera. This production at the San Francisco Opera House is the most vivid and colorful production that I have ever seen. For that I can forgive the first two acts that are not as vibrant as I would like – but the Third Act is beyond fantastic.

David Hockney has come up with a production that is way into the future. With dazzling 3-D like visuals. Hockney made sure that the lighting enhanced the music. The result? Electrifying!

In her San Francisco debut (Irene Theorin) as (Turandot) is a princess who is cold as ice. Finally, in the second act the man-hating Turandot begins to melt a little as Prince Calaf manages to answer her riddles. Calaf (Marco Berti) wins over the Princess. Not easily, but he melts the frigid Princess little by little. The Princess is gorgeously dressed and completely on pitch. She eventually warms up to Calaf who sings the tuneful and beautiful aria “Nussum Dorma.” It’s always the highlight of the Opera.

On stage briefly is Liu (Leah Crocetto) who is in love with Calaf. He, of course likes her, but he doesn’t love her. Her fate? The Princess sends Liu to her death. The selfish, self-loved Turandot is not all that caring.

I don’t think there could be a better production of “Turandot.” The singing is absolutely breathtaking.

The conductor Nicola Luisotti’s conducting brings us a magical blend of Orchestra and Vocals. This Grand Opera opens new light and new visions of powerful high notes. Every movement is sumptuous.

TWIN BROTHERS WILL AND ANTHONY NUNZIATA will be at the Fab Razz Room this Sunday at 7pm. They deliver powerful and passionate music from the Great American Song Book. Catch them while you can. http://www.therrazzroom.com/

BEST OF THE FRINGE FESTIVAL at the Exit Theatre. Shows 7 and 8:30 p.m. Fri. Sat. http://www.theexit.org/ This is the cream of the crop.

SHO HO STARRING SARAH MOORE is shaking the New Conservatory walls. Boy, what an exciting, eccentric performer. This one you definetily don’t want to miss. http://www.nctc.com/

BROADWAY BY THE BAY HAS ‘GYPSY’.
The Sondheim Classic is always a favorite – and BBB has some of the best actors in the Pennisula. http://www.broadwaybythebay.org/

RITA MORENO IS SELLING OUT AT THE BERKELY REP. This is a must see and hear. Moreno is a huge world famous star. http://www.berkeleyrep.com/

THE UNDERPANTS – a play written by Steve Martin is at the Gough Street Playhouse in SF. Want some laughs? Then this is the place to get them. http://www.custommade.org/