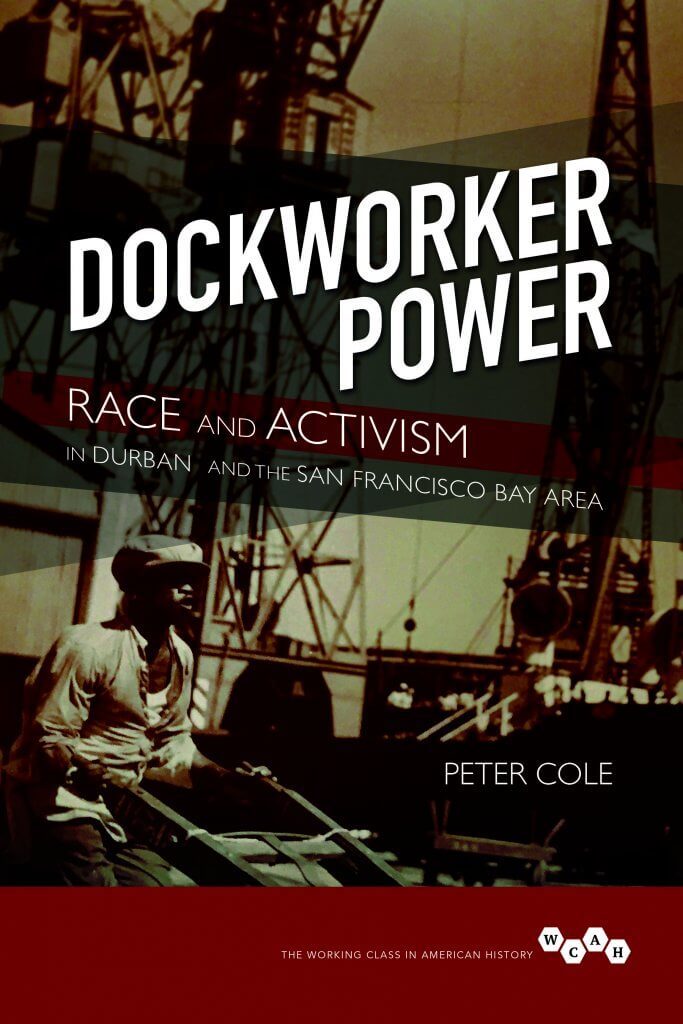 Peter’s Cole’s Dockworker Power (Illinois; $35) looks at the history of “dockers” in Durban, South Africa, which sits on the Indian Ocean, and dockworkers San Francisco, which sits in a place we all know very well. The comparisons and the contrasts between the two ports, their workers and their host cities are at the heart of this book. They will be of interest to students and scholars who examine the connections between race and class and who trace the nature of trade unions and working class movements around the world.

The subtitle for Dockworker Power is “Race and Activism in Durban and the San Francisco Bay Area.” Cole gives about equal weight to both places. He honors them equally, though the sections of his book which are about San Francisco will appeal to readers of Beyond Chron, as well as to men and women who worked on and around the waterfront in the City and also in Oakland, which appears briefly in these pages.

A professor of history, Cole sets himself two major tasks. First, to describe the crucial role that Durbin “dockers,” as they call themselves, and Bay Area dockworkers played in the battles against racism, segregation and apartheid in the twentieth-century. Second, to show what happened to workers when machines, including giant cranes, took the place of men with dollies, and when huge shipping containers supplanted cardboard boxes and palettes.

“For millennia, the loading and unloading of ships had been, for all intents and purposes, remarkably similar,” Cole’s writes. “From [ancient] times through the mid-twentieth century this work remained largely depended upon the backbreaking manual labor of gangs of men, though it also involved great skills to properly load and balance a ship’s cargo.”

Cole honors the dignity of labor. He tends to idealize and romanticized waterfront workers, though as he points out they have often been neglected and have long deserved recognition.

Not surprisingly, Cole writes eloquently about Harry Bridges, the Australian-born leader of the International Longshore and Warehouse Union (ILWU), who arrived in California at 19 and who became well known during the 1934 General Strike eighty-five years ago that tied up the San Francisco docks and a good part of the City, too.

For some unspecified reason, Cole calls it the “Big Strike” of 1934. All of the San Francisco radicals that I knew, including the author, scholar and Communist Party organizer, Alexander Saxton, called it “The General Strike.” So did Tillie Olsen who wrote vivid reports of the General Strike that were published contemporaneously in The New Republic and The Partisan Review.

Unfortunately, Cole makes no mention of Olsen or her reports, which would have helped him bring the General Strike to life and also to suggest the important ways that the powerful ILWU helped to shape the culture of San Francisco from the mid-1930s to the mid-1960s.

In the 1930s, Saxon wrote what was called “proletarian literature.” In the 1940s, he was one of many left-wing intellectuals who taught workers and citizens at the California Labor School, which was hard hit by McCarthyism and the anticommunists crusade that enjoyed a remarkably long life.

Cole points out that as late as 1960 the House Committee on Un-American Activities, AKA HUAC, was still pointing a finger at Communists on the waterfront. In fact, they were actually there; they were key union organizers, and as Cole shows they pushed the ILWU to oppose racism, recruit African-Americans and fight for the rights of laboring men and women no matter what the color of their skin.

Dockworker Power traces the links between Dr. Martin Luther King, Jr., the NAACP and the civil rights movement, on the one hand, and the ILWU and the dockworkers on the other hand. The book describes the importance of the “the steady man,” the “hiring hall,” and the “shape up,” which is depicted in Eliz Kazan’s classic, On the Waterfront that portrays a world that no longer exists.

Cole describes the “surge” in west Coast and Bay Area

shipping that took place during the War in Vietnam, which the ILWU had opposed as early as 1965. Near the end of his book, Cole offers a long quotation from a person who identified himself as an “S.F. Dock Striker” and who explained that mechanization “fragmented” workers, made labor more repetitious and also eliminated jobs.

Workers around the world have feared technological changes, sometimes with good reasons, sometimes not. Years ago, I interviewed a Bay Area tech wiz who traveled around the world computerizing ports. In Buenos Aires, the dockworkers were worried that the computer system he installed would make it more difficult for them to scheme, skim and steal. They were told they would be able to continue all their old practices under the new system.

The flaws of Cole’s book are not unique to it, but are shared by a great many books from academic presses in which the author says what he or she is going to say, then says it and at the end reminds the reader what he or she has already said. It’s a rather old-fashioned and outmoded kind of scaffolding; someone should tell editors at university presses that it’s possible to eliminate the archaic methodology and still publish solid academic work.

Cole’s linking of Durban in South Africa and San Francisco in California, half way around the world, feels forced. After all, South Africa was a British colony until 1994. Durban dockers were all black; San Francisco dockworkers were, until the mid-1930s, all white.

Still, Durban, for all its differences with San Francisco, has a fascinating history. Cole points out that on April 21, 2008, South African dockers refused to unload a huge cargo of ammunition for AK-47s destined for Robert Mugabe in Zimbabwe. The ship—the An Yue Jiang—apparently returned to China with its deadly cargo.

Dockworkers around the world have had power, though their power diminished greatly with the coming of containerized shipping, which Cole calls “a revolution.”

For more than one-hundred-years, dockworkers (and sailors) were among the most colorful and cosmopolitan of laborers. Think of Herman Melville, Jack London and Eric Hoffer, author of Working and Thinking on the Waterfront. Cole depicts dockworkers as worldly, internationalist and curious about languages and cultures not their own.

If you like to feel romantic about working class movements, strikers and General Strikes then Dockworker Power is for you. There’s also enough colorful Bay Area history to keep a reader solidly entertained.

Did you know, for example, that MUNI didn’t hire an African American driver until after World War II? His name was Audley Cole. Dockworker Power brings him to life, along with men who have names like C. L. Dellums, Oakland’s black labor leader, and Cleophas Williams, who left rural Arkansas and the world of Jim Crow and found work on the waterfront and a sense of his own dignity in the ranks of the International Longshore and Warehouse Union.

Jonah Raskin is the author of Natives, Newcomers, Exiles and Fugitives: Northern California Writers and their Work.