On the Ground for Charlie Brown in CA-04 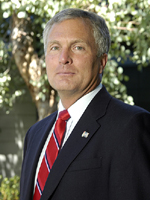 Last Saturday, I headed up to the Roseville/Rocklin area—Sacramento suburbs off Highway 80 on the way up to Tahoe—to volunteer for Charlie Brown’s campaign for U.S. Congress. I arrived on the heels of some fantastic news for the campaign, a
poll commissioned by Daily Kos revealing a five point lead for Brown. It’s hard to understate the significance of this considering the extremely conservative nature of CA-04 (take, for example, 2004, when Bush buried Kerry by 24 points here.) After a day of canvassing in the District and speaking with the people that live there, the reasons for Brown’s success so far make a lot of sense to me. The place seems full of disaffected Republicans and Independents open to Brown’s positions and not wild about his challenger, Tom McClintock. While the day wasn’t all wine and roses, I’m convinced that CA-04 represents an enormous chance for Democrats to pick up a seat in Congress, and that activists should continue to focus on this race to ensure Brown makes his way to victory.

My first pleasant surprise of the day came upon arriving in Brown’s Roseville headquarters, where a professional, competent staff greeted me and quickly gave a rundown of the day’s events. Folks could stuff envelopes, write postcards to potential voters, work the phones, build lawn signs, or hit the pavement and knock on doors. I chose knocking on doors, and when I left at 10 o’clock, the place already seemed a hive of activity. When I returned for a break at midday, the place was even more packed, with about 35 people all hard at work on a variety of tasks.

The second surprise came when I met seven people that came up to Roseville from the Bay Area early that morning to volunteer for Brown. Members of the nascent organization Take Back Red California, these folks travel all over the state to help out with close elections, including recent trips to CA-03 to help out Bill Durston and State Assembly District 10 for Alyson Huber. The commitment and good spirits of these folks boosted my usually
low faith in the Bay Area’s involvement in statewide issues.

Of course, all good things must come to an end, and when I looked down at the sheets of voters I’d be speaking with that day, I realized more than three-fourths of the doors I’d be knocking on would be the homes of registered Republicans. For someone used to campaigning in San Francisco and Seattle, it came as a bit of a shock, but by the time I finished, I was glad I’d gotten the houses I did.

The major lessons I learned:

Democrats are in the Bag … Mostly

Most of the Democrats I spoke with immediately said they already planned on voting for Brown, and several said they would volunteer or donate to the campaign. However, I did speak with a couple folks who remained skeptical about Brown, citing his status as a former Republican, his avowed belief in fiscal conservatism, and his support for the right to bear arms. While they weren’t necessarily considering voting for anyone else, they wanted to make sure if we sent Brown to Washington, he wouldn’t jump ship and become another centrist Democrat indistinguishable from his Republican colleagues.

A few points seemed to hit home with these folks – Brown is pro-choice, a strong believer expanding health care to more Americans, and has made alternative energy a central focus of his campaign. An even stronger point seemed to be pointing out the evils of Tom McClintock. Despite his run for Governor a few years back, people seemed relatively unfamiliar with just how far to the right McClintock sits. A quick rundown of his positions on climate change (a myth, he says), Social Security (it’s ‘morally bankrupt,’ he says) and the minimum wage (he calls it a ‘destructive government policy’) seemed to hit home.

I can’t see Democrats in the district voting Republican, and I certainly can’t seem them not voting with the presidency at stake. But I can see some folks leaving the U.S Congress portion of their ballot left blank if they don’t learn a bit more about their candidate. Brown’s campaign shouldn’t take his base for granted, and ensure Democrats know what he stands for, and what’s at stake in their district.

Many Republicans Want to Talk

The biggest shock of the day came during my conversations with registered Republicans. For the most part, they seemed happy to talk about the race with me, and wanted to learn more about Brown. The talking points the campaign provided me helped a lot – the first few statements provided an immediate foot in the door, emphasizing Brown’s 26 years in the military, his status as a former Republican, and his belief in balancing the country’s budget.

From there, things got interesting. I talked to several people who voted for Doug Ose, a more moderate Republican in the primary, and felt McClintock didn’t represent their values. Like many Republicans, they seemed fed up with the Iraq War, our dependence on foreign oil, and with valuing corporate America over the average citizen. McClintock seemed like more of the same to them, and Brown’s support of tax cuts to the middle class and providing health care coverage for more citizens resonated with them.

The message of McClintock as a carpetbagger—slammed home by Ose during the primary and picked up by Brown—also resonated with a lot of the folks. When they learned McClintock is not from the area, nor has any real connection to it, and simply seems to be looking for a way to continue his political career after being termed out of his Southern California State Senate seat, they listened. And they listened even closer when they learned that Brown has lived in Roseville for 16 years. There seems to be a strong regional identity in the area, and Brown’s campaign should continue to take advantage of the fact that people don’t like the idea of an outsider representing their homes.

Brown’s strong record as a military veteran also hit home. One woman I talked with spent much of her time taking care of her disabled brother, a veteran wounded during a tour of duty. While she usually voted Republican, she seemed impressed with Brown’s military experience. Even more so, she seemed livid when she learned of McClintock’s record in the State Senate, which includes several vote against benefits for veterans and their families.

Despite hearing from many Republicans who said they’d support Brown, or at least would remain undecided, a variety listened to me but maintained their support for McClintock. Most of these folks seemed one-issue voters – that issue being fiscal conservatism. They maintained that Democrats always run up massive deficits, and that they can count on McClintock to not do the same. Pointing out the record-setting deficit the Bush administration ran up over the past eight years didn’t seem to resonate. If they can, it seems Brown’s campaign could gain some traction by working more to tie McClintock to Bush and his failed economic policies.

As much good will as I found in the suburban cul-de-sacs and parkways of Roseville and Rocklin, I also found a chunk of strong McClintock supporters, maybe 10 percent of the people I talked to. These folks had no desire to speak about issues or the campaign, and I heard several variations of “I’m for McClintock and I don’t want to talk about it (cue slamming door sound)”. While this is to be expected, Brown’s campaign should do its best to identify strong McClintock supporters and not waste time trying to win them over.

To win, Brown’s campaign must continue to get its message out to voters. Face-to-face interaction seemed to be an excellent way of doing this, as it quickly broke down the instant barriers Republican partisans put up against Democrats. So far, the campaign seems to be doing an incredible job, with a cadre of volunteers and staff that, at least from what I’ve seen, are energetic, competent and committed.

These folks, and the people in their district, represent one of the best opportunities Democrats have to turn a former Republican stronghold into a place that will help add to a blue majority in Congress. They deserve the support of progressives everywhere, and while it’ll take a lot more work between now and Election Day, I think a victory party in CA-04 come Election Day is within our sights.