On Obama, Facts No Longer Matter 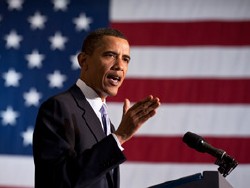 Last week’s report that an increasing number of Americans erroneously believe President Barack Obama is a Muslim – despite his high-profile conflict in 2008 with Reverend Jeremiah Wright – is part of a larger unreality tour. From TARP to phantom tax hikes to false narratives about Michelle Obama’s Spain vacation, Fox News and the Republican Party have given up even the pretense of connecting Obama to the fact-based world. As Karl Rove said in 2004, conservatives “create” their own reality and have worked overtime on this mission since 2009. Unfortunately, the Obama Administration has given credibility to this artificial Republican world, altering policies in response to false claims about “death panels” for grandma and spending $600 million to meet a nonexistent alleged rise in violent, illegal immigration. And after battling conservatives over fictional issues, the Obama Administration has little patience for responding to progressives’ real world critiques.

“[He] said that guys like me were ‘in what we call the reality-based community,’ which he defined as people who ‘believe that solutions emerge from your judicious study of discernible reality.’ I nodded and murmured something about enlightenment principles and empiricism. He cut me off. ‘That’s not the way the world really works anymore,’ he continued. ‘We’re an empire now, and when we act, we create our own reality.”

Rove was widely lampooned for this comment, but it turns out that while he wrongly applied it to Bush and the Republican Party – brought down by the realities of Iraq and economic collapse – it foreshadowed the Fox News / Republican strategy toward the Obama Administration.

Most describe this strategy as obstructionism. But its deeper goal is to create a separate reality that insulates voters from accepting Obama’s, the Democratic Party’s, or progressive successes.

The national survey by the Pew Research Center that found 18% of Americans believing Obama is a Muslim also showed sharp declines in those saying he is a Christian (48-34%). Nearly half (43%) claim not to know what the President’s religion is. The reason this is so significant is that the factual record regarding Obama’s religion is beyond dispute, and the numbers of misinformed Americans is rising.

The Pew numbers show the success of the strategy Karl Rove unveiled to Ron Susskind in 2004. Conservatives have created a new reality – wherein Obama is a Muslim, and is not a Christian – that has no connection to the fact-based world.

And it is hard to conclude that the political right would have been prevented from creating this alternative reality if Obama had listened to progressives and consistently implemented more populist policies. While this would have increased loyalty among Obama’s 2008 electoral base, it would also have intensified conservative efforts to bring McCain voters into their alternative universe (though McCain himself is happily ensconced in this make believe world).

Of course, Obama has strengthened this Fox-created artificial world by giving it credibility.

Confronted with lies about “death panels” for grandma, Obama withdrew end-of-life counseling from the health care bill. When Republicans claimed that Obama won election due to ACORN’s electoral fraud, the President signed a bill eliminating federal funding for the grassroots group. When racist immigrant bashers insisted that illegal immigration was rising and increasingly violent (both false), Obama gave $600 million more for border security.

Obama keeps conceding to the right-wing reality inventors even though each concession simply ushers in a new round of falsehoods. And the President is not helped by the traditional media’s refusal to call either Republicans or Fix News “liars” – check out the New York Times August 18 coverage of the Pew poll which headlines: “In Defining Obama, Misperceptions Stick.”

A “misperception” is when you hear or see something wrong, and implies a lack of intent. In contrast, the claims around Obama being a Muslim, or of his not being born in the United States, are intentional lies – which the traditional media refuse to acknowledge.

Another World Is Possible

Imagine a world where President Obama ignored the alternative reality created by Fox News, and recognized that its viewers are not persuadable. Or imagine if he acted upon the statistics about declining immigration and refused to spend more money appeasing immigrant bashers.

I’m starting to get the sense that many progressive constituencies do not believe their studies and fact-based approaches still carry much weight with the Obama Administration. And when they see how Americans increasingly believe long promoted falsehoods, and that the President often defers to Republican unreality, frustration mounts.

Fortunately, the upcoming post Labor Day election cycle will force the media to at least make some efforts to call out conservatives on their lies. This is the brief window where candidate statements are assessed for veracity, unlike any statements on Fox News or those made by elected officials outside campaigns.

Had the media not addressed John McCain and Sarah Palin’s campaign lies in 2008, the Republicans might have made the race competitive. Obama may have given the media too much credit after it called out Republican lies during that campaign, but he should have learned the truth by now.

Randy Shaw is editor of Beyond Chron and the author of Beyond the Fields: Cesar Chavez, the UFW and the Struggle for Justice in the 21st Century