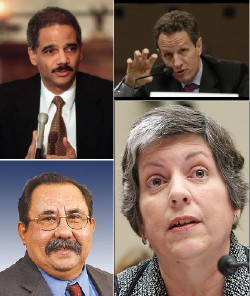 As Barack Obama’s Cabinet fills with Clinton Administration veterans, some are raising concerns why no “movement progressive” has been selected. Hillary Clinton’s appointment as Secretary of State galvanized fears that Obama’s cabinet is unduly “centrist,” a concern amplified by the daily parade of predominately white male Clinton veterans in the “possible nominee” section of the New York Times. While floating such names satisfies the media’s desire to define Obama as moving to “the center,” they do not mean that our new President is abandoning his commitment to “change.” In fact, Obama’s appointments primarily show that he understands better than his critics the underlying political dynamics involved with implementing progressive change. Obama realizes that it is not a weakened Republican Party that holds the greatest risk to his progressive agenda, but rather internal Democratic opposition. This is what killed health care and labor law reform under the last two Democratic presidents, and could do the same in 2009. By bringing the Clinton’s and other factions of the Party inside his tent, Obama makes it harder for Democrats to oppose his progressive plans.

After writing on November 10 that progressives should not evaluate Barack Obama’s commitment to change by his cabinet picks, commentators on the left have done just the opposite, particularly in the wake of Hillary Clinton’s appointment. But critics make three assumptions: (1) that progressives are being excluded from the cabinet, (2) that this exclusion is part of Obama’s shift to “the center,” and (3) that Obama is forfeiting his mantle of “change” by relying on Clinton Administration “retreads” – that are either inaccurate and/or reflect a misunderstanding of how an Obama Administration is most likely to succeed in implementing a progressive agenda.

Where are the “Movement Progressives”?

The real question should be: where did anyone get the idea that Obama would appoint a “movement progressive” as Secretary of State, Attorney General or Secretary of Treasury? John Kerry, the supposed favorite for the former, is a movement progressive, while the latter post was always going to be either Timothy Geithner (who got it) or Lawrence Summers (who progressives opposed).

John Edwards was the only possible “movement progressive” for Attorney General, and he removed himself from consideration. Eric Holder, who becomes the first African-American Attorney General, was the longtime frontrunner, and is expected to preside over civil rights division dominated by progressive attorneys.

What about the other key posts? Janet Napolitano is clearly the most progressive potential choice to direct Homeland Security. And her appointment should allay concerns that Obama has put immigration reform on the backburner.

Peter Orszag, selected to head the Office of Management and Budget, is a strong health-care advocate who likely was the most progressive option. Tom Daschle was widely backed by progressives while in the Senate, and the response to his appointment to head Health and Human Services has been almost universally positive.

There was little discussion about the next Commerce Secretary, but Bill Richardson was likely the most progressive possible selection.

Where are the movement progressives? Expect to see them appointed in the areas where progressive social movements thrive, such as labor and the environment.

Arizona Congressman Raul Grijalva is considered the frontrunner to be Interior Secretary, and environmentalists are jubilant over his potential choice.

The Secretary of Labor will either be David Bonior, Linda Chavez-Thompson, or another “movement progressive.” Expect the same in Education, Energy and Transportation, three areas where few names have been publicly discussed.

I was initially incredulous that Obama would pick Hillary Clinton as Secretary of State, precisely because foreign policy is where she is most conservative.

But the genius of this pick has become clear.

First, it brings the entire Clinton camp into the Obama camp. This means that Harold Ickes, Lanny Davis, James Carville and all those Clinton allies whose media connections could have caused all kinds of problems for Obama will now be on the President’s side.

Second, Clinton gives Obama the credibility he needs to move U.S. foreign policy to the left.

Let’s be clear here: Obama has never adopted a progressive foreign policy, so some progressives may have unrealistic expectations in this area. But its clear that had Obama appointed a “movement progressive” as Secretary of State, his policy innovations would have been attacked by both Clinton Democrats and Republicans.

Now he only has Republicans to be concerned about, and they have nowhere near the credibility of Clinton Democrats. For those who believe that Hillary will move Obama to the right, or be a fifth column in the Obama presidency, my response is that this analysis greatly underestimates Obama’s ability to implement and harness political power.

Moving to “The Center”

Some believe it very important that Obama be identified as a “progressive” who will implement left-wing policies. If you are among this group, you have misread the new President and are sure to be disappointed.

On the other hand, if you are among those who want policies long identified with progressives to be enacted, and do not care if they are called “centrist” or even “conservative,” than Obama is still on track to fulfill your expectations.

All this talk about Obama moving to “the center” appears designed to make political moderates feel good about supporting policies they long opposed. And if universal health care, a billion-dollar “green jobs” measure, massive investment in alternative energy and infrastructure jobs, labor law reform, and the entire list of Obama campaign proposals is now seen as “centrist,” then progressives won more on November 4 than we realized.

Those complaining about Obama selecting people with Clinton Administration experience should read about the Jimmy Carter years. Carter was elected as an “outsider,” and he tried to run an administration without those with federal government experience.

The result? A disaster. Carter’s administration was not only dysfunctional, but its extreme incompetence lent credence to Ronald Reagan’s charge in the 1980 election that “government is the problem.” Obama would have been a fool to follow Carter’s example, and has instead brought in a team of people who will get things done.

Obama is smarter than many of us, because he understood that his main obstacle come January would be “moderate” Democrats—not Republicans. Such Democrats have assisted Republicans in undermining progressive health care, environmental, and labor reforms, and could have done the same in 2009-10.

Obama realized that implementing progressive measures requires an unprecedented degree of Democratic unity. He is using his appointments to achieve this, and the wisdom of this strategy will soon be apparent.