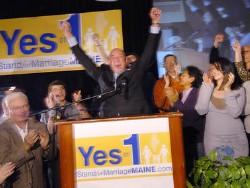 I’ve been very discouraged by Question 1 passing in Maine, because our side ran a great campaign that did everything it was supposed to do. And after losing in California, we all believed that marriage equality was “meant” to prevail this time. But the story is not that we failed to learn the lessons of Prop 8 – we were simply fighting on tougher terrain. I always knew that Maine was an old state, but it wasn’t until last night that I realized it has literally the highest median age in the country. “No on 1” did a terrific job turning out its base – and while we could have done better in a few places, there were just too many old people in the rural areas. Losing campaigns rarely get credit for what they did right, and the lessons from Maine – (a) respect your base, (b) find supporters all over the state, and (c) don’t let the opposition take the offensive – are key to what will help us win in California. And for that reason, I’m proud to have been a part of it.

When I came to Portland in October, I argued that Question 1 would fail if “every Mainer voted.” And it certainly felt that way. People told us they support gay marriage, but then with an apathetic shrug would say we “shouldn’t have to vote” on it. The campaign mobilized its base well, and turnout exceeded all expectations. 567,000 people voted statewide, 40% higher than in 2005 – when Maine had an anti-gay referendum in an off-year election.

The problem was where we saw the largest bump. Portland upped its turnout by 32% (an impressive number in its own right) – but ultra-conservative Arostook County had a 52% spike. Washington County, on the state’s eastern edge, saw 56% more of its people show up. Coastal counties where “No on 1” prevailed (Hancock, Knox and Sagahadac) all had good turnout increases, but less than the average. We never saw this coming, in part because the weather in Portland was gorgeous on Tuesday – while it rained in Caribou.

One exception was at the University of Maine in Orono – where I arranged to send ten California Young Democrats (including kids from UC Santa Barbara, who last year ran the best campus voter registration drive in the country) for the last four days of get-out-the-vote. Not only did 81% of U-Maine students vote “No on 1,” but the town of Orono saw a whopping 77.7% jump in turnout – compared with the 2005 election. Maine has same-day voter registration, and the school had polling places on campus.

So why didn’t we win? Because Maine is the oldest state in the nation – with a higher median age than Florida or Pennsylvania. I knew it had an old population, but also knew it was the 3rd least religious state – as in “churchgoing.” Even Nate Silver predicted that Question 1 would fail – due to Maine being a more secular state. One lesson is that age matters a lot more than religion.

Another factor to consider is where “No on 1” did well – compared with the 2005 effort to defeat an anti-gay referendum. That law prevailed by a 10-point margin, and our side had the same campaign manager – Jesse Connolly – who knows the state well, and by all accounts did a superb job this time around. Question 1 passed 53-47, which means the “pro-gay” side lost eight points. It’s harder to fight for marriage rights than protecting gays from job or housing discrimination, so nobody expected us to match the 2005 margin. But it’s a good metric to measure how we fared in different parts of the state.

By all accounts, Cumberland County did an excellent job – finishing only 3.5% less than its 2005 numbers. Even if you take Portland out of the mix, the suburbs did just as well – even the conservative town of Yarmouth. Another place where “No on 1” held its own was along the Mid-Coast – in Lincoln and Waldo Counties – where the campaign had a good operation.

But it was the far-reaches of northern Maine – Arostook County, where we got clobbered by finishing 13½ points behind the 2005 results. “No on 1” had its own 50 State Strategy (which I saw up in Bangor), which helped cut down our losses in Oxford and Penobscot Counties. But the more distant areas were sparse, harder to organize and very conservative. I never ventured up that far north, but knew from conversations about how hostile an area it was.

So how did the conservative, rural areas turn out in numbers like they did? The “Yes on 1” camp admits that we ran a much better field campaign. I never took theirs seriously, because the e-mails they sent out were quite amateurish. But it looks like they had more of a stealth campaign – run through the network of churches, with volunteers one Sunday after another. And what must have motivated them was a fear of the unknown “gays.”

As I’ve written before, “No on 1” did a much better job responding quickly and intelligently to the attack that gay marriage would be “taught” in public schools. Rather than deny it, they argued that schools are safe havens – and by opposing tolerance and diversity, “Yes on 1” wanted the kids of gay couples to feel ashamed.

But then “Yes on 1” escalated their attacks to new levels – from gay marriage “taught in schools,” to gay sex. Prop 8 supporters never sank to that level in California, because they never had to. But faced with a more savvy opponent in Maine, they simply got nastier and nastier – and it doesn’t seem like “No on 1” responded effectively. And the last attack inflicted enough fear.

I don’t blame “No on 1” for what they did, because responding to the “gay marriage in schools” ad was better than letting it fester. But next time, there needs to be a serious discussion about how to address the inevitable attacks that our hateful and vicious opponents clearly have no shame hurling at us. A good friend – who is a former teacher – sent the following e-mail yesterday, offering me some helpful advice for the future:

We have to hit the school issue hard and unrelentingly. It isn’t enough to just run the kind of ads they ran in Maine to address that issue. We need to actively promote LGBT education in the schools. Talk about Lawrence King, the high suicide rate, and really press the point that the kind of ‘education’ we have in the schools now is killing LGBT kids. We also need to trumpet the extensive research that shows that kids of LGBT parents turn out fine and the obvious fact that learning that being LGBT is okay won’t make you gay.

We can’t be subtle anymore. We are dealing with deep seated fears. We need to activate the frame that will make them want to protect LGBT kids too.

Because frankly, I’m sick of always losing … even if I felt we lost a lot more honorably this time. And in Maine, we lost in ways that lay the groundwork for an eventual victory. Maine may be the oldest state in the nation, but California is 46th. It will only be a matter of time.