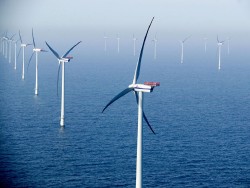 At the Massachusetts statehouse in Boston on Wednesday, Secretary of the Interior Ken Salazar announced his decision to approve the Cape Wind project, the nation’s first offshore wind farm. This long in coming decision will be a dramatic step forward in the region’s effort to break its dependence on dirty fossil fuels and to grow New England’s and the nation’s clean energy economy. The announcement came as an oil spill in the Gulf of Mexico worsened, threatening an environmental disaster.

The proposed wind farm consists of 130 turbines in Nantucket Sound, between Cape Cod, Martha’s Vineyard and Nantucket. The power generated will be enough to supply 75 percent of the energy demands of Cape Cod and the islands.

“Granting the green light for Cape Wind marks a historic first step toward realizing the promise of clean, renewable offshore wind energy” said Environment America’s Clean Energy advocate Sean Garren. Originally proposed in 2001, the effort has been bogged down for years in review processes and disputes between various groups of stakeholders.

In addition to praising the Cape Wind decision, Garren called on federal officials to learn from and improve the lengthy review process for additional offshore wind proposals. “We hope that state and federal officials can take what they have learned from this project and then expedite the deployment of offshore wind in ways that continue to protect the environment. Our environment and the emerging clean energy economy cannot wait this long for future wind projects to come online.”

Secretary Salazar seemed to agree when he said: “This will be the first of many projects up and down the Atlantic coast,” he said.

Juxtaposed with this great news about clean energy, environmental disaster looms in the Gulf of Mexico as a result of our continued dependence on oil. An explosion last week on an offshore oil rig tragically left 11 workers dead and multiple leaks in a pipe 5000 feet below the water’s surface. According to new estimates, the leaks are currently spilling as much as 210,000 gallons of oil per day into Gulf waters just 50 miles off of the Louisiana coast. At that rate, this spill has potential to overtake the 1989 Exxon Valdez disaster as the worst oil spill in U.S. history.

The only quick option for stopping the leak, triggering the “blowout preventer,” has been unsuccessful thus far. Longer term options include building a giant net to catch and collect the oil before it reaches the surface and drilling additional wells to help stamp the flow from the leak. Experts anticipate that it will be weeks or months before these are ready to be put in place and the leak is actually under control. The Coast Guard is also spraying chemical dispersant on the oil on the surface to break it apart. The chemicals used in the dispersants, which are usually detergents or alcohol based solvents, can themselves have serious impacts on many forms of wildlife. Further demonstrating the lengths necessary to clean up an oil spill, the Coast Guard has experimented with setting fire to the oil slicks to limit the amount of oil that reaches shore.

Meanwhile, in an effort to contain the oil that is heading towards shore, officials are preparing containment booms around sensitive coastal areas. The booms are not likely to catch all of the oil, especially considering the oil slick on the surface was 80 miles wide Wednesday and could be hundreds of miles across when it reaches the shore as early as this evening, pending weather and ocean currents.

“If the oil reaches the shore it will kill all the shrimp, all the crabs and all the oysters,” Kim Vo, owner of the largest shrimp distributor in Venice, LA, Sharkco Seafoods International, told the Wall Street Journal. The oil, which can easily kill wildlife from fish and oysters to nesting birds and whales, is also threatening two national wildlife refuges, in addition to the tourism and fishing industries of dozens of coastal communities.

Ironically the spill comes on the heels of President Obama’s announcement last month to open up 165 million acres of the Gulf of Mexico, Atlantic coast and Northern Alaskan coast to offshore oil drilling. Even in the aftermath of the rig explosion and resulting oil spill and potential for environmental disaster in the Gulf of Mexico, the White House has yet to fully pull back from the proposal.

Cape Wind, the 420 megawatts of energy it will create, and the potential for many more similar projects up and down the coasts are looking like better options all the time.

The author works for Environment America, a federation of 28 state based environmental organizations with more than 100 staff and 1 million members, activists, and allies working together for a greener, healthier future.