Of Dogs and Disasters: “Mine” Film Review 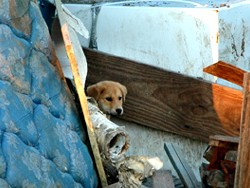 What suffices to establish ties between humans and the dogs they choose to make part of their lives? Is it the ability to provide food and a warm roof? Is it the willingness to expend great efforts to protect the dog’s welfare? Or is the formation of such ties actually dependent on the dog’s initiative? All of these questions have been asked as long as humans learned to co-habit with dogs, cats, and other domestic animals. But these queries have never taken on graver implications … until now.

In the scramble to provide emergency shelter for refugees from Hurricane Katrina, no provisions were made for pet owners. This meant that none of the available shelters would allow refugees to bring along dogs, cats, or any other pets. For the pet-loving humans, this rule forced many of them to make the emotionally wrenching decision to leave their animals behind and save themselves. 150,000 of those animals left behind by their owners died. The casualty rate would have been higher had volunteer animal rescuers not entered New Orleans and transported those dogs and cats to shelters around the nation via the Operation Orphans of the Storm program.

The problem, and the focus of Pezanoski’s film, came when the original owners returned for those temporarily sheltered pets. A number of those pets had already been sold to foster owners before the original owners could reclaim them. Those new owners in turn developed their own bonds with the animals, and now show at least a reluctance to surrender these dogs or cats.

At first blush, sentiment would lie with reuniting the refugee animals with their owners. Though Pezanoski shares this sentiment in her film, the filmmaker makes a good case for the opposing viewpoint. The shelters couldn’t keep the rescued animals forever given their constraints of limited space and the need to house other animals. It also didn’t help that one year after Katrina, less than half the original residents had returned. Finally, a threat of lawsuits to reclaim the temporarily orphaned dog or cat would act as a disincentive to prospective adopters.

But Pezanoski points out such lawsuits provide the only legal recourse for original owners seeking to reclaim their animals. More importantly, finding an attorney to bring such a suit and having the financial resources to pay that attorney serve as their own disincentives. Otherwise, former owners seeking a reunion with their lost animals must rely on the generosity or good wishes of the animal foster parent before that joyful meeting can occur.

Why would Katrina refugees go to such lengths to reclaim their lost pets? One could suspect guilt at having made the decision to leave their pets behind. A more persuasive argument offered by “Mine” is simply that reclaiming a formerly lost animal offers a symbolic victory over the devastation wrought by Hurricanes Katrina and Rita. Yet the ultimate answer is simply that making a pet an essential part of one’s emotional life creates a bond that can never be severed easily.

The stories of several peoples’ bonds with their dogs provide the emotional heart of “Mine.” Among the more notable tales are those of Gloria Richardson, who wouldn’t leave New Orleans without her labrador Murphy Brown; New Orleans native Malvin Cavalier, who unexpectedly got separated for months from his dog Bandit; and Tiffany Mansfield, who faces the prospect of losing the Katrina refugee dog who helped her psychologically heal. Pezanoski makes the bond so palpable that when owner Victor Marino mentions his dog Max jumped to safety when the flood waters receded, one shares the owner’s visible relief.

Viewer knowledge of that deep bond makes the refugees’ decision to leave their animals behind that much more painful. The refugee shelters didn’t admit people with pets. “Mine” subject Jessie Pullins had to balance evacuating 20 family members and leaving his dog JayJay versus risking having his entire family killed by staying with JayJay. It’s not an easy decision to make. In that light, the comment by Good Shepherd Rescue attorney Randy Turner that “If Katrina’s conditions were too dangerous for a family, why is it not too dangerous for a dog” comes across as clueless and arrogant.

One can thank the volunteer animal rescuers and shelters who found and provided temporary homes for the abandoned animals. Allocating only 30 official animal rescuers for all of New Orleans demonstrates the government’s inadequate and incompetent regard for animals’ lives. Those volunteer rescuers saved abandoned dogfighting dogs and puppy mill-type prisoners.

Yet their dedication to animals’ welfare also makes such advocates appear obnoxiously judgmental. When does rescuing a dog entitle the rescuer to judge who’s fit to be reunited with that dog? Did Jessie Pullins really deserve that long self-defensive rant from an animal shelter worker when he asked for information on the whereabouts of his dog JayJay? Even if one allows that some of the former dog owners used their dogs for dogfighting or breeding in squalor, did those animal abusers really form the majority of New Orleans residents forced to leave their animals behind? None of the answers to these questions reflect favorably on such animal advocates.

“Mine”’s ultimate triumph keeps saccharine and melodrama out of the classic story of separation between a human and a beloved dog. By using Hurricane Katrina and its aftermath as context for her story, Pezanoski makes such melodramatic material emotionally engaging. The sometimes long nationwide searches for the missing dogs become a metaphor for the slow process of rebuilding lives shattered by Katrina’s arrival. The reunion of owner and dog easily brings tears to a viewer’s eyes. Those tears were well earned given the ordeals undergone by animal and human.