Occupy’s Strategy of Ongoing Direct Actions is Unprecedented – And Sustainable 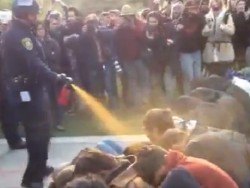 The Occupy movement has hit its stride. As city after city experiences direct actions, civil disobedience, and the near constant humming of helicopters from police or media, it becomes clear that Occupy is pursuing a strategy that is unprecedented in United States history. Never before has a social movement relied almost exclusively on “occupying” institutions and on ongoing direct actions that interfere with the normal operations of public space. Such tactics are typically part of a multi-faceted campaign, or targeted at specific persons or corporations. But Occupy’s plan to primarily rely on nonviolent confrontational tactics in public spaces month after month and potentially year after year is a first. Americans have shown an unwillingness to accept such “crisis” tactics on a sustained basis in the past, but Occupy can prove otherwise.

Occupy Wall Street has evoked more thoughtful analysis of activism and social movements than at any time since the WTO protests in Seattle in 1999. But now that we’ve debated the pros and cons of demands, the need for specific targets, the importance of maintaining camping, and consensus decision-making, it’s time to address the larger issue: Can support for the movement grow through ongoing confrontational tactics in public spaces, or will the public soon tire of the disruptions and financial costs associated with Occupy?

The Power of Confrontation

After all of the misguided sniping about Occupy’s strategy and tactics, last week’s events offered direct actions that had specific targets (the New York Stock Exchange, Bank of America, a UC Regents Director who works for a bank) and highlighted specific wrongs (e.g. tuition hikes) and misguided policies (e.g. New York Governor Cuomo’s opposition to raising taxes on millionaires). And the traditional media responded with the type of sympathetic coverage that was customary until the frame shifted from the abuses of the 1% to the right to camp.

As the students and other savvy activists with ReFund California who kept San Francisco’s downtown Bank of America office tied up for hours again showed (the coalition’s “Make Banks Pay” stickers are now everywhere), nonviolent confrontation and direct action are powerful tactics. But as cities start tallying up the police costs for such actions (Occupy Oakland reportedly had involved $2.4 million in police costs even prior to last week’s ouster of campers), critics will invariably charge that the Occupiers are forcing cash-starved cities to cut services to fund police, while also hurting business (and hence reducing city revenue).

Such charges were once leveled at civil rights protesters engaged in nonviolent sit-ins in segregated restaurants and other public accommodations. But charges that sit-ins hurt the local economy fell flat outside the South.

Similarly, groups like New York City’s ACT UP engaged in confrontational direct action tactics far beyond anything Occupy has done (even “occupying” New York City’s St. Patrick’s Cathedral in 1989), yet they retained public support. This was due to the health emergency driving their cause, and the fact that their actions were nowhere as frequent or as broadly targeted (either geographically or as to those who were the subject of confrontations) as Occupy.

But the public was less supportive of the direct action tactics of Earth First!, whose activists courageously put their lives on the line to stop the clear-cutting of ancient redwood trees. In The Activist Handbook, I quote Earth First! strategist Mitch Friedman’s belief that his group was unpopular because “Society does not want a crisis dealt with through crisis tactics.”

First, the tactics must bring some victories. Otherwise, the public will conclude that the cost and public inconvenience of confrontational protests are not worth it.

That’s why returning homeowners to their potentially foreclosed homes is important, as was getting banks to back down on debit card fees.

Second, constant creativity and avoiding repetition is a must.

Longtime Santa Cruz activist and former Mayor Mike Rotkin told me of being involved in a 1972 protest that shut down Highway 17 (the main road in and out of Santa Cruz) for two hours as part of the campaign to stop the Vietnam War. Drivers did not mind the inconvenience – once. But when Rotkin’s fellow activists (he opposed the move) decided that if an innovative tactic worked once it should be repeated, the next closure brought mass anger against the protesters.

Creativity means not focusing on occupying Bank of America’s week after week, but rotating targets so that one event deals with foreclosed homes, another with tuition hikes, another with taxing millionaires etc. This avoids the public getting weary of being inconvenienced by activists doing the “same old thing.”

Third, minimize inconvenience to non-targets, particularly small businesses. This means avoiding random bridge blockades or other tactics that chiefly anger the 99%, and ensuring that public street takeovers do not hurt the livelihoods of nearby sandwich shops or other small businesses. Many in urban centers are owned by persons of color, and often women of color, who support the Occupy cause.

Fourth, the public is more likely to look favorably on mass events, as it shows a “base” for public disruption. This means fewer but larger confrontational protests are preferable to weekly events whose low participation undermines public perceptions of Occupy’s support.

Finally, Occupy’s ability to sustain direct action confrontations over time will be boosted by ongoing incidents of brutal police violence. The recent pepper-spraying of peaceful protesters at UC Davis would have been a front-page story in every newspaper in the United States had the Egyptian or Syrian military so attacked non-violent students; as word of this incident spreads, along with that of the violent police attack on UC Berkeley students and faculty at a plaza dedicated to Free Speech Movement hero Mario Savio, the public recoils in horror.

Campus police treating students as if they were violent thugs reaffirms Occupy’s chief message that excessive income inequality is undermining the nation’s core values. This critique has resonated with millions, and explains why in Occupy’s case the public will accept crisis tactics on a sustained basis and support for the movement will grow.

Randy Shaw is author of The Activist’s Handbook, and Beyond the Fields: Cesar Chavez, the UFW and the Struggle for Justice in the 21st Century.