Occupy Must Expand Beyond Activist Hotbeds 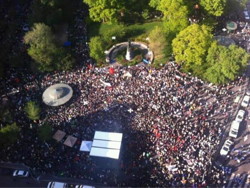 While Occupy May Day events occurred throughout the nation, the larger and most publicized events were in New York City, Chicago, San Francisco, Oakland and Seattle. These traditional activist strongholds routinely have thousands marching in the streets, which is why the national media did not give the May 1 events anywhere near the coverage it gave to immigrant rights marches in the Spring 2006. Those events saw 75,000 protesting in Fort Myers, Florida, 80,000 in Atlanta, 8000 in Omaha, and 3000 in tiny Garden City, Kansas. These events sent the message that the immigrant rights movement extended beyond longtime activists. In contrast, the May 1 Occupy protests showed a movement that still must expand its base. Corporations and national politicians serving the interests of the 1% will not feel compelled to change course unless major protests go beyond traditional activist centers to where much of the 99% live.

When I attended UC Berkeley in the 1970’s, a professor told me a story about some of his students who were heavily involved in the campus protests of the 1960’s. “They told me that the revolution was coming. I told them they needed to go over to Orinda and Walnut Creek (two affluent suburbs 15-20 minutes away) and see if the revolution had reached there.”

It clearly had not.

Student activists did no organizing in the suburbs, and many felt that creating enough of a ruckus at Berkeley, Columbia University, and other elite schools would itself cause “the Establishment” to tumble. There were exceptions to this narrow perception of what it takes to comprise a national movement – the UFW had student volunteers in front of the suburban supermarkets that campus radicals ignored – but to this day many activists do not recognize that building real power requires mobilizing outside traditional activist hotbeds.

To be sure, there are pockets of Occupy activism everywhere. But the movement’s public and actual presence is disproportionately on both coasts and in major urban centers –enabling its targets to see Occupy as the “usual suspects” rather than newly outraged Americans.

The national edition of the New York Times did not cover the protests on the front-page of the May 2 edition, and it was not on the front of the paper’s website on Tuesday evening. Overall, traditional news coverage was dramatically less than for last fall’s Occupy events, and there were surprisingly few online stories on the night of the protests recounting the day’s events.

Media coverage was clearly impacted by President Obama’s surprise trip to Afghanistan and national speech. If George W. Bush had done this, progressives would have accused the President of trying to distract public attention from Occupy’s challenge to the 1%; instead, there was little criticism of Obama’s timing, nor of his Nixon-sounding pledge to keep troops in an unwinnable war until we depart “the right way.”

But the larger problem is that the media has seen this all before.

The Guy Fawkes masks, “We are the 99%” signs, and the assaults on retail stores by black-clad protesters in San Francisco and Seattle are no longer novelties. And signs of rebellion in such cities are seen as business as usual by the 1% and their political allies; after all, these are folks who see Nancy Pelosi and those who elect her as radical leftists.

The national media got excited about the Wisconsin uprising because that had not been seen before, and, for all of its radical traditions, the state is viewed as far more representative of the entire country than California or New York. If the May 1 Occupy protests had been as geographically sweeping as the immigrant rights rallies of 2006, the media would have been all over the story.

The media did cover property destruction by the small groups that have routinely engaged in such conduct since the Seattle WTO protests in 1999. This included the band of self-identified revolutionaries who went down Valencia Street in San Francisco’s Mission District vandalizing cars and retail businesses.

This vandalism occurred the same night that Tomas Borge, a revolutionary leader of Nicaragua’s Sandinista National Liberation Front, died at age 81. One can only wonder what Borge, Che, Fidel Castro, or Ho Chi Minh would think of people whose “revolutionary” strategy centers on breaking glass in art galleries, restaurants and clothing stores while allowing those controlling the means of production to go free.

Many Occupy supporters fear that the vandalism undermines support for the movement (which led some to claim that undercover police were the real perpetrators). These fears are unwarranted. The public is also angry about the 1%, and will not shift away from supporting greater economic fairness because of such foolish acts.

Occupy’s greater challenge is that the public likes to see progress. And that requires more than marches or protests that energize existing activists but do not broaden the base.

With the election season soon to be in full swing, Occupy either figures out ways to attract new activists or risks losing them to political campaigns. Building support outside major urban areas is hard work, but there is no short cut for building an effective national movement.