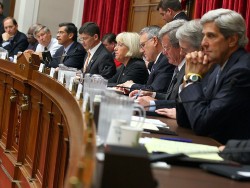 With organized labor increasing support for the Occupy movement – SEIU Local 1021, the Alameda County Labor Council and other unions greatly contributed to the success of the November 2 Oakland General Strike – many see the battle for the 99% as energizing traditional Democratic constituencies for the November 2012 elections. But if the Joint Select Committee on Deficit Reduction reaches a bipartisan deal in the next three weeks that cuts Medicare and Social Security, the opposite is more likely to be true.

Progressives have not focused on the Deficit Reduction Committee, as its meetings have coincided with the growth of Occupy’s historic grassroots movement for economic justice. And some are addressing the President’s refusal to commit to a Wall Street transaction tax, which is the subject of an “Occupy the Treasury” event today. But the Committee is being pressured to slash hundreds of billions of dollars from health care and entitlement programs, and from other domestic needs, as part of an Obama-backed “grand bargain” to raise taxes on the wealthy. Should such an agreement be reached, those who worry that Occupy lacks specific demands will have their fears allayed: Occupy activists will have a clear target in President Obama and other Democrats backing such a deal.

As Republicans promote even more tax breaks for the wealthiest 1%, Democrats would appear to have a great opportunity to seize the spirit of the Occupy movement and become the party of economic populism for the 2012 elections. President Obama now talks the language of economic unfairness. But if he and fellow Democrats agree to a deficit reduction deal that cuts Medicare, Social Security, and other programs serving the 99%, expect an electoral calamity for Democrats in 2012.

Occupy and the Democratic Party

Unlike the Tea Party, Occupy is neither funded nor controlled by key figures in a national political party. But as labor unions with close Democratic Party ties increasingly get involved in the movement, they may soon be forced to choose which side they are on.

President Obama and national Democratic leaders better hope they do not put labor unions in a position of having to make this choice. Because while labor leaders have stood by Obama despite his weak record on their priorities, Occupy has galvanized union members in a way that alters this calculus.

SEIU, for example, is not going to be able to conduct an effective electoral mobilization drive in 2012 if its members see Obama and the Democrats as having sacrificed Medicare, Social Security and vital domestic programs. And even if union leaders throw millions into Obama’s campaign, this will now be framed as a betrayal of the values of the Occupy movement rather than as a smart investment in labor’s future.

Obama put himself in this box by proposing the “grand bargain” to Speaker Boehner, and then agreeing to create the Deficit Committee. And for all his talk about raising taxes on the wealthy, he is not promoting using the money generated to provide additional relief to the bottom 50%.

Some believe that Obama’s real strategy is to put Republicans on the defensive for backing the interests of the 1%, and that the President knows the Deficit Reduction committee will not reach agreement. These folks probably also believed that Obama picked Larry Summers and Tim Geithner to head his economic team because these insiders would be more effective in cracking down on Wall Street – when the opposite proved true.

David Dayen of Firedoglake has provided outstanding coverage of the Deficit Reduction committee, whose work must end in three weeks. Obama supporters better hope that no agreement is reached, as the alternative puts the President and the Democratic Party in the crosshairs of a growing and increasingly powerful progressive movement.