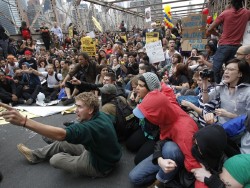 I visited Occupy Wall Street last week. It was the day before a San Francisco federal judge upheld the United States Post Office’s claim that it can legally discriminate against the poor in delivering mail, and also the day before the Congressional Budget Office announced that “the top 1% of earners more than doubled their share of the nation’s income over the past three decades.” My visit also just preceded the New York Times/CBS News poll that found the public believing the Obama Administration favored the rich over every other group. Thanks to the Occupy movement, it now seems the media cannot talk enough about staggering U.S. income inequality. But more importantly, Occupy has gone beyond the usual suspects and given a new generation of activists a desperately needed vehicle for advancing progressive change.

During my visit to Occupy Wall Street I was struck by the lack of official organizations with tables, signs etc. It shows that Occupy has not simply rebranded an existing network of progressive groups, but has become the most successful magnet for new activists since the end of the 2008 Obama campaign.

Of course, Occupy’s right-wing critics do not see the movement that way. While watching a FOX News show on my flight back from New York City, I heard commentator Monica Crowley claim that the Occupy movement involved the usual array of progressive groups and that it had been organized by “ACORN.”

ACORN? Has Crowley forgotten that right-wing falsehoods helped sink the organization in 2009? Or did she figure that FOX viewers love demonizing ACORN and would not recall it was defunct? Either explanation is certainly more comforting for the right than to acknowledge that new activists are rushing to join a struggle for economic justice, a trend unlikely to be promoted on FOX News.

For those despairing over the direction of the Obama administration, Occupy shows that the large grassroots activist base that thought it was fighting for real change in 2008 did not disappear. Instead, people needed an organizational vehicle to get involved, which existing progressive institutions were unable to provide.

I have often pointed out that the United Farmworkers movement enlisted most of its recruits in the 1970’s, a period in which national activism was supposed to be in decline due to disillusion/burnout from the anti-Vietnam War struggle and other sixties movements. The UFW attracted dedicated young activists not simply because its cause was just, but rather because it actively recruited, trained, and enlisted these newcomers in a broad social justice movement.

The UFW gave young people eager to help farmworkers a direct path toward doing so. Until Occupy, potential new activists seeking to address the big picture issues of democracy and inequality were unclear where to go or how to get involved.

And while Occupy lacks formal structures and membership (which has also been true for most anti-war movements), training is a priority. Training sessions were scheduled the day I was at Occupy Wall Street, and this is a regular part of daily activities.

The ongoing protests against Verizon, foreclosures and other new targets are enabling Occupy to become the type of “incubator” for young activists as the UFW was in the 1960’s and 1970’s. And the more actions newcomers join, the more they gain the activist skills to pass on to others.

Keeping Eye on the Prize

After the mass arrests of Occupy participants on the Brooklyn Bridge, I wrote that “when the police become the focus, the wrongs of the big banks recede into the background.” I would now amplify that statement to say that when urban mayors and police chiefs become the target, the forces of greed are gratified others are taking the spotlight from them.

Oakland Mayor Jean Quan and her police force outraged the nation, but nobody should believe that Quan or any other urban mayor is either to blame for staggering national income inequality, or has the power to rectify it. Quan’s actions have galvanized the Occupy movement (I was near a large solidarity protest in Greenwich Village that was even covered in the New York Times) and put critics on the defensive; the injury to an Iraq War veteran now working in the computer industry forced the media to acknowledge Occupy’s broad-base, undermining growing efforts by conservatives to marginalize it.

So there is no question that confrontations with mayors and police can help recruitment and energize existing participants. But time spent protesting mayors and police chiefs, and fighting over the right to camp in a public place that has little or no connection to Wall Street or the financial sector, diverts energy and attention from the core wrongdoers.

I think the Occupy movement understands this point, as it has been remarkably on message in its public statements. And there are so many intersections between income inequality and policies, laws and practices that disproportionately route African-Americans and Latinos to incarceration rather than graduation that the Occupy movement easily encompasses criminal justice struggles. For example, a number of Occupiers joined an October 22 “National Day of Protest to Stop Police Brutality, Repression & the Criminalization of a Generation!,” which included a spirited march from New York City’s Union Square down Broadway.

So let all the flowers of the Occupy movement bloom. The movement has already reframed the entire national debate about the country’s values and direction, and it is not yet two months old.