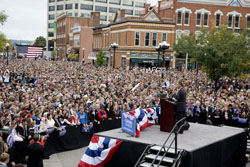 “Barack Obama should win Wisconsin,” a Madison City Councilwoman told me when I arrived last week in the Badger State. “But it will be a razor-thin victory, which means he needs a strong field presence.” Having just spent one week of vacation time to help Obama’s Wisconsin field operation, I’m confident they’re on the right track. While the rest of us hyperventilate about the ups and downs of the presidential race, Obama’s Wisconsin team keeps their cool—focusing intently on the number of voter ID’s essential to win November 4th. I was impressed at how they didn’t let a spike or dip in the polls distract them from their central purpose: winning the state for Barack Obama. And while a successful Democratic campaign in the Badger State—where you can register to vote on Election Day—focuses on bringing out the base in Madison and Milwaukee, Obama has 44 field offices so that even the reddest counties get hit. With less than a month to go, Obama just needs enough volunteers in Wisconsin to execute a well-planned out field effort.

Although Wisconsin has a progressive tradition that dates back to Bob LaFollette—and includes the lefty University of Wisconsin campus in Madison—it has trended more Republican over time, making it an ultimate “swing state.” Al Gore barely carried the state in 2000 by 5,700 votes. In 2004—with Ralph Nader being less of a factor—John Kerry won by a mere 11,000 votes. Polls have fluctuated here for quite some time, and both major party candidates have devoted serious resources in the Badger State. I had wanted to take some vacation time to campaign for Obama in a swing state, and after a family wedding in Chicago decided to take a short trip up to Wisconsin.

I didn’t spend my five days in Wisconsin talking to undecided voters or canvassing swing precincts, so this won’t be the kind of anecdotal journalism you can read about elsewhere. Instead, I worked long hours at the Statewide Headquarters in Madison with field director Nicole Derse and her team, where the major “get out the vote” (GOTV) decisions were made. I’m of course not at liberty to discuss any details—but can tell you that in my 12 years of volunteering on dozens of political campaigns, I was thoroughly impressed.

Immersing myself in Obama’s field operation gave me a wholly different perspective about following the presidential race. For months, I obsessively followed the polls, news stories, and pundit analysis that—like most armchair observers in the blue states—gave me violent mood swings. But the field staff in Wisconsin was too busy doing their job to let such inanities distract them. They’ve divided the state into eight regions with a large team of field organizers—each of whom are held accountable daily—that they don’t have time to stop and worry about what conventional wisdom says about the state of the race.

The coolness about how they handled the campaign reminded me of the candidate himself—who has kept a steady hand despite slanderous “guilt-by-association” attacks, viral smear campaigns, lies about his past accomplishments and a major financial crisis. Meanwhile, his opponent John McCain has been unfocused and reactive—picking a woefully unqualified running mate after meeting her only once for crass political reasons, “suspending” his campaign to “deal with” the financial crisis, and shifting his economic message in a blatant pander to public anger about Wall Street.

Even good news—like the recent poll numbers—didn’t tempt Obama staffers to rest on their laurels. When we learned on Thursday that McCain was pulling his campaign out of Michigan, the only relevant news for us was that it meant he would divert more field resources to Wisconsin. And that meant the campaign had to be ready: recruit and train more canvassers who would help execute Obama’s effective “neighbor-to-neighbor” operation to counteract more Republican money coming its way into the state.

And “neighbor-to-neighbor” is what will win the state for Obama. As state coordinator Dan Kanninen told Salon.com yesterday, “the 2004 election was a base-versus-base election, where they turned out their base and we turned out ours. But this campaign—and we certainly still consider our base to be important—is more about persuasion, and that’s where our neighbor-to-neighbor advantage comes in.”

Wisconsin is one of a few states with “same-day voter registration.” So it’s no surprise that Democratic campaigns focus on liberal college students in Madison and African-American precincts in Milwaukee, getting infrequent voters who are virtually certain to vote their way to register—and then vote. But Obama’s Wisconsin campaign has also replicated Howard Dean’s “Fifty State Strategy” at the state level. Besides pushing a large turnout in liberal areas, the campaign has organizers in even the most Republican precincts—conducting a persuasion campaign, and identifying Obama supporters.

To get a feel about the campaign’s grassroots presence, consider Obama’s recent visit to La Crosse—a small town on the Minnesota border. The campaign told the field organizers that if they could generate 5,000 people on a chilly Wednesday morning to hear Barack speak, the event would be a success. Instead, they managed to get nearly 15,000. Many were doubtless moved to hear him speak because of what’s going on in the country—but enormous credit goes to the field operation. The field campaign also managed good turnouts for more low-profile events with surrogates Howard Dean, Jesse Jackson Jr., and even Adam Brody—who toured Wisconsin’s college campuses.

Coming back home has given me a fresh perspective about the Obama campaign, and how supporters should treat the final month. Stop obsessing about polls, and focus on how many volunteers the campaign can get. Stop watching the pundits who don’t know what they’re talking about: go to the local campaign office, and figure out how to organize you and your friends to take road trips to the swing states. That’s what will really make history, and that’s the kind of work that truly matters. Too many journalists spend their time just writing the news; it’s about time some of us start making the news.