Obama’s SOTU: Now “We are all Republicans” 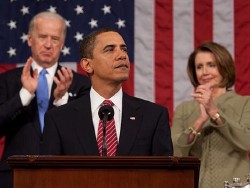 State of the Unions are pompous pageants, and few change history. Consider them presidential victory laps, voiced to justify federalism, that last bulwark of civilization against armed evil-doers or economic dyspepsia – even against long belated delays of civil rights protection. Thus, the shotgun of clichés, jingoism, and simplifications designed for applause, not depictions of an empire in decline.

But plumbed, we can squeeze this much significance, as the speech tips off Obama’s direction for the year. Already majoring in centrism, the President now relabels his “devout non-ideologue” button to read: “devout non-partylogue.” Here’s the brave new answer to the ever-constricting Party of No – our first, post-partisan President of No Single Party.

Remember, Obama’s politics were never about red states or blue states but United States. So be it, united at last: his fluid brand is expansive and universal, deterred neither by inconsistency nor outdated political power lineages – dedicated to the principle all voters are created equal when pandering grows your new base. By some logic, Obama’s new balancing act offers more benefits than risks: still embracing his original party’s language and world-view, this SOTU is nothing less than the best Republican speech by a Democrat in ages.

I recommend reading, not hearing the speech, so there’s no distraction from charm or charisma. Then, you will share my wonder whether John McCain had won, with splashy commitments to business expansion, budget freezes, tax cuts, tax credits, jobs credits, doubling exports, and a laundry-list of stockholder-friendly moves. Health reform is reduced to frugality and affordability, with officials as bean counters who forgot the moral task: curing the neglected poor and sick from suffering and death.

Having stumbled the first year as right-leaning Democrat, why not try safe, right-leaning Republicanism? Banish thoughts of alignment with the reality-resistant extremists running today’s party of obstruction – no, the target here are ’08 Obama independents going GOP, Blue Dog and wavering Reagan Democrats, plus estranged GOP moderates. Much like the faction President Clinton conjured up, not without sarcasm, in early days: “I hope you’re all aware we’re all Eisenhower Republicans . . . fighting the Reagan Republicans. We stand for lower deficits and free trade and the bond market.”

President Obama isn’t just “moving to the middle,” but swallowing it whole and, strategically, it’s not his worst ploy. While playing chameleon liberal won election, this mask dropped after inauguration, part and parcel of Rahm Emanuel’s war on progressives. Obama hasn’t had a big win in months, desperate for recruits to replace leftists fast jumping ship. Considering how election triumphs accrued by over-promising, then bypassing his base, why not move on, like this Music Man replica, to the next 76 trombones in the next county. Not having a mind-changing love interest (read: ideology) means this Music Man is moving on, despite undelivered uniforms or liberals left in the lurch.

When in Doubt, Channel Reagan

Modernizing bland Eisenhowerism won’t work without the brilliant addiction of the last great GOP game-changer, Ronald Reagan. As Aaron Zelinky comments, the President seamlessly weaves into this new centrism the Gipper’s intonation and themes: “First, resolve in the face of adversity. Second, a folksy demeanor laced with jokes. Third, a persistent reminder that he took office amidst a sea of trouble.”

What a powerful package, if it works, Eisenhower+Reagan+Clinton, a round-up to corral residual liberals, independents, and disaffected Republicans. Reeking of Rahm Emanuel, this ploy could reverse falling poll numbers, provide immunity against mid-term disaster and prep for 2012 re-election. Is there any question, finally, this is “change” Democratic leaders, consultants, fundraisers, and pundits – plus nearly all major businesses – “can believe in”?

Did you ever hear a “socialist” Democrat talk so much about openness to good GOP “ideas” (such as?), cutting taxes, corporate health, tax credits, reduced capital gains, discretionary freezes and that ultimate, if forgotten conservative talking point – pay-as-you-go legislation (ah, the joy of balanced budgets)? Like McCain, the president castigates earmarks and rogue lobbyists, apologizes for imposing TARP, soft-pedals immigration reform, and won’t ever cut Pentagon spending. What, even if we win a war? Plus, scratch “Bolshevik” radicalism on energy independence for industry favorites: offshore drilling, “clean coal,” bio-fuels and nuclear generation.

We have to seek new markets aggressively, just as our competitors are. If America sits on the sidelines while other nations sign trade deals, we will lose the chance to create jobs on our shores . . . if we do not take meaningful steps to rein in our debt, it could damage our markets, increase the cost of borrowing and jeopardize our recovery — all of which could have an even worse effect on our job growth and family incomes.

What’s notable is what’s omitted, like slamming the biggest obstacle to progress: the Senate filibuster rule. This president castigated the Supreme Court, after the fact, but not a word about 41 senators still today privately vetoing an entire country. Likewise, nothing about an energy conservation plan, the cheapest, easiest escape from the tyranny of big oil and foreign oil producers. Even less about rescinding once “radical” Bush anti-terrorist abuses.

Yes, liberal moments crop up: murmurings “don’t ask, don’t tell” will end, someday, the Supreme Court slap-down, and a miniscule $30 billion job program. Yet offsetting small change was Obama’s over-arching support for the nitwit rightwing analogy likening federal to family budgets – tough times mean belt-tightening for everyone. Nope, nope, and nope: unless Keynesian pump-priming has been revoked, government spending, focused on jobs creation, is the only hard medicine against recessions getting really, really ugly. Liberalism is dead if the fed isn’t the last resort before catastrophe.

Perhaps, if things get worse, this President will abandon the outmoded Eisenhower-Reagan-Clinton Trio for FDR, the only President capable of answering blatant systemic breakdowns with muscular jobs programs. Unfortunately, progressive dreams were dashed by the double-barreled mandate for militarism Obama whooped up at his West Point and Nobel Prize speeches. It’s now 95% guns, with thin slivers of butter: one year of defense and intelligence spending would cover permanent, full-fledged national health reform.

What a pathetic cri de coeur echoed by this once promising President, especially during recession: “We’re all Eisenhower Republicans” with voice over by Ronald Reagan, directed by his Blue Dog chief of staff. If Republicrats or Dempublicans populate the White House, it hardly matters that big corporations can now freely buy elections.