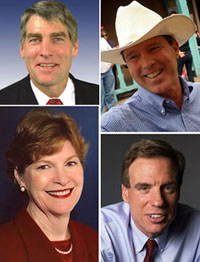 While the lion’s share of attention for November is focused on the presidential race, a related (and almost equally important) fight is the battle for the United States Senate, where Democrats hope to expand on their slim majority. Barack Obama is favored to win the White House, and Democrats will expand on their House majority. But come next year, expect Republicans in the Senate to wage aggressive filibusters—bringing all progressive legislation to a screeching halt. And while a 60-plus majority in the Senate is still very much a long shot, Democrats are virtually guaranteed to win at least four seats. And the Senate seats most likely to flip—Virginia, New Mexico, New Hampshire and Colorado—all happen to be in swing states that will pick the next President. For all the talk about an “Obama-effect” that is helping Democrats run for the House and Senate that has expanded the map, a “reverse-coattail” effect in these four states can make Obama the next President.

Many progressives fear that an Obama victory will bring us back to how things were in January 1993, the last time Democrats controlled the House, Senate and White House. Despite all the stars being lined up as they should, Bill Clinton could not get anything done—in part because Senate Minority Leader Bob Dole filibustered everything. By 1994, the Democratic base was dispirited—and Republicans ran against a “do-nothing” President to win back Congress. We’ve seen G.O.P. obstructionism in our current Senate (a record 92 filibusters in the past two years), so expect them to act the same way in 2009.

I remain a bit skeptical that Democrats really need sixty votes to get anything done, or at least progressives should not let them off the hook if they fail to achieve this treshhold. But there’s no question that Democrats must expand their ranks—and get a decisive Lieberman-proof majority. And they already have four seats pretty much in the bag. The good news for Democrats is that all four of them happen to be in states Obama needs to win.

Obama has long focused his campaign on Virginia, hoping that demographic changes—and recent statewide Democratic victories like Tim Kaine and Jim Webb—will make him the party’s first presidential candidate to win the state since 1964. But polling shows that it’s a tough fight, and he’s running neck-and-neck with John McCain. Obama, however, has a secret weapon: ex-Governor Mark Warner, the Democratic nominee for Virginia’s open U.S. Senate seat. Warner is currently crushing Jim Gilmore (his Republican opponent) by a 23-point margin, making it the easiest Democratic pick-up in November.

If Warner wins by a landslide margin, he can put Obama over the top. And if Obama beats McCain in Virginia, the presidential race is practically over.

New Mexico is one of only two states that voted for Al Gore in 2000, and George Bush in 2004 (the other being Iowa.) This year, the presidential race in New Mexico is close—although in recent days Obama has started to pull ahead. It’s too soon to tell if that’s a trend, but he’ll be getting help from Democratic Senate nominee Tom Udall. In another open seat vacated by a Republican, Udall has been the solid favorite for months—as he’s kept a double-digit lead over his opponent throughout the whole campaign.

If Obama wins every state that John Kerry won in 2004—plus Iowa and New Mexico—he’ll need just six more electoral votes to clinch victory. Colorado, Ohio or Virginia will then be all he needs to become the next President. Obama would only need to win one.

Kerry won the Granite State in 2004, but McCain has always been popular there—which is keeping the race very close. But New Hampshire is trending Democratic, and Obama should win if voters believe that McCain is tied with George Bush. It’s also the home of John Sununu, the most endangered Republican Senator in the country. Former Governor Jeanne Shaheen, the Democratic nominee, has kept a consistent lead ever since entering the race. If Shaheen works closely with the Obama camp, he will carry the state.

There’s a reason why Democrats chose to have their National Convention in Denver—the state’s demographic trends of Latinos, young voters and the “creative class” have moved it away from its Republican roots. And in an open U.S. Senate seat vacated by a Republican, Democratic Congressman Mark Udall is favored to beat former Congressman Bob Schaffer—whose conservative views on social issues make him a less “mainstream” candidate.

The Presidential race is most likely to come down to Colorado as the tipping point. If Udall’s lead can create a “reverse-coattail” effect for Obama, McCain cannot win.

The Democratic goal of a sixty-vote majority is still a long shot. But beyond the four seats they are almost certain to win, Barack Obama’s appeal may help bring others over the top. In Oregon, Democrat Jeff Merkley is running a tight race against Senator Gordon Smith—with environmental groups prioritizing this seat. In a sign that Obama is certain to win the state, Smith has been running ads that tout his ability to work with the Illinois Senator. Oregon voters are probably more likely to listen to Obama—who has actively endorsed Merkley.

In Minnesota, Al Franken has had a tough time against Senator Norm Coleman—though polls in recent weeks are now trending his way. The race may ultimately come down to Minnesota’s liberal reputation—and with Obama likely to win the state, it would help Franken. However, Obama’s lead in Maine hasn’t much helped Democrat Tom Allen—who is still trailing Senator Susan Collins by a big margin. But Allen can still win that race if he manages to “nationalize” the race, and build upon Obama’s coat-tail effect.

The remaining Senate races are in more conservative states, where Obama’s appeal will be more limited—although Senate candidates will benefit from a more energized grass-roots campaign. Putting Sarah Palin on the McCain ticket has noticeably affected one Senate race—Alaska—where Democrat Mark Begich’s lead over the ethically troubled Senator Ted Stevens has shrunk. But Stevens has enough troubles, so that even having his Governor on the national ticket won’t save him. It will just make it closer.

At least one traditionally red state could flip to Obama—North Carolina—and a competitive Senate race there is generating Democratic excitement. It’s no sure thing that Kay Hagan will beat Senator Elizabeth Dole, but the race is as close in the state as the presidential race. If Obama wins North Carolina, he will have already won through other states. If Hagan beats Dole, it will be easier to accomplish the Democratic agenda.

Democrats will need to win ten seats to get a filibuster-proof majority, as Joe Lieberman will officially be kicked out of the caucus. They’re on their way to getting four, but will need more help to win an additional six or seven.