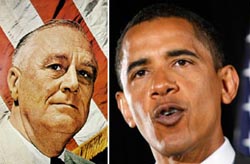 As President Obama prepares to address Congress on health care reform, progressives have learned three critical facts. First, as Jean Edward Smith describes in contrasting Obama with FDR, our Democratic President has not provided the dynamic leadership that many of his most loyal supporters expected. The contrast between George W. Bush’s aggressive policy implementation despite losing the popular vote and stealing the 2000 election, and Obama’s dignifying the policies of a Republican party in ruins, is striking. Second, progressives have stayed remarkably unified in critiquing Obama’s health care strategy. Defying the predictions of many, Obama’s star power has not led activists to avoid holding him accountable, as occurred during the Clinton presidency. Third, grassroots activism has thrived despite Obama’s failure to harness his troops behind a specific proposal, and in the face of claims that those who worked tirelessly to elect progressives last fall have dropped out. If anyone needed further proof that national grassroots activism wedded to issues rather than specific politicians is essential for progressive change, the health care struggle makes it clear.

Amidst the “Breaking News” on the drive for universal health care, its often more valuable to step back and look at the larger context of this struggle. And what we learn from this vantage point can be surprising.

Consider the recent New York Times op-ed that showed how Franklin Delano Roosevelt not only avoided bipartisanship, but rather went out of his way to isolate and marginalize the Republican minority. Unlike the current occupant of the White House, Roosevelt never allowed the vehement opposition from a vocal minority to alter his agenda for the nation.

A common critique of the political left is that it is great in opposition but falls apart when in a position to govern. The usual stereotype involves an executive buffeted by various left constituencies, whose internecine warfare paralyzes government and paves the way for a conservative backlash.

Until recent weeks, I never saw Barack Obama or his administration as being unable to exercise strong leadership. But the President’s handling of health care is dramatically different from the governing approach of Roosevelt or Lyndon Johnson, the two presidents with whom he is often compared.

These Presidents had an agenda, and moved heaven and earth to enact it. It would have been inconceivable for Roosevelt to insist on Republican support for the New Deal, or for Johnson to subject the War on Poverty to Republican veto.

Obama’s desire to find a common ground was part of his attraction. This is not what most progressives find troubling. Rather, it is Obama’s reluctance to use the vast powers of the presidency to drive the enactment of his top domestic priority that many of his longtime supporters simply cannot understand.

Ronald Reagan and George W. Bush pushed their right-wing agendas despite often strong public and congressional opposition. And both framed their election victories as mandates for implementing their entire agendas, with neither bothered by the lack of bipartisan support.

Presidential leadership requires implementing the agenda you were elected to enact. It’s great for a President to bring people together and act as a mediator, but ultimately they must be prepared to lead.

We’ll know soon if Barack Obama will be the leader that millions thought they were getting when they elected him, or whether his conciliatory approach is unaccompanied by the toughness needed to secure the “Change” his campaign promoted.

The good news is that progressives are remaining highly unified in their critique of Obama’s mishandling of health care. One searches in vain among the hundreds of diaries on Daily Kos for a progressive defense of Obama’s actions, while comment after comment acknowledges the President’s obvious strategic failure of empowering his political enemies.

We faced a much different situation in the Clinton years. As I discuss in The Activist’s Handbook, many Washington-DC based progressives were so excited to be invited to White House meetings and policy discussions after twelve years on the outside that they feared losing their access by publicly criticizing Clinton Administration betrayals.

Clinton thus felt comfortable proceeding with a “triangulation” strategy that undermined progressive policies, because the President knew he was not being held accountable by the left. Some predicted similar progressive silence should Barack Obama break his commitments early in his presidency – that this has largely not occurred is a tribute to the increased savvy of progressive activists, and to the rise of the Internet, which allows those not fearful of losing “access” to help shape the debate.

In case anyone has forgotten those elite dominated pre-Internet days, Clinton political advisor Doug Schoen recently authored a September 2 editorial in which he insists on a bipartisan health care bill and describes the notion of Democrats passing their own measure as “bad for the Democrats and the country.” Of course, Clinton’s shift to the right was so good for Democrats and the nation that Republicans won control of the House and George W. Bush became President – a cautionary tale made even more powerful as polls show Obama’s approval ratings among Democrats falling over his lack of leadership on health care.

The Triumph of Grassroots Activism

Absent the independent grassroots activism of MoveOn, Democracy for America, the PIRGs, labor unions, HCAN and hundreds of groups large and small, the battle for truly meaningful universal health care would already have been lost. Speaker Nancy Pelosi has demanded that a public option be included in any House bill, and such Senators as Bernie Sanders to Sherrod Brown are sending similar messages, but it has been grassroots activists that have kept the public option alive and given these politicians the backing they need (Pelosi got multiple standing ovations at a San Francisco labor breakfast last Friday, so she knows what her core constituency wants).

If Barack Obama makes the political miscalculation of agreeing to a health care “deal” that angers his base, activists can say they did everything in their power to prevent this outcome. That’s very important.

It’s important because what was so frustrating about the elimination of the federal welfare entitlement under Clinton, or the more recent victory of the anti-gay marriage initiative Prop 8 in California, is that activists did not feel they did all they could to avert these results. In contrast, while we can question the allocation of resources, and the lack of more powerful local campaigns targeting key senators, the bottom line is that activists sufficiently mobilized their base so that President Obama has no doubt where those who worked hardest on his campaign stand.

Activists did their job on health care – now the President must do his.

Randy Shaw is also the author of Beyond the Fields: Cesar Chavez, the UFW and the Struggle for Justice in the 21st Century