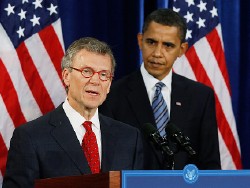 After activists worked tirelessly to elect Barack Obama, it seems foolish to be reassessing the President after only seven months in office. But Obama’s approach to his signature priority of health care reform gives us no choice. Obama preached transformational change, and insisted that, in contrast to Bill Clinton, he would sacrifice a second term if necessary to achieve major goals. He has also regularly told his base to push him to do the right thing. But on health reform, Obama is not harnessing his Organizing for America field efforts toward mobilizing on behalf of a public option, which is his bases’ priority. Instead, the President appears to be paying lip service to the progressive agenda for health reform while empowering the “inside the Beltway” forces that he pledged to battle. Will Obama’s activist backers accept that their hero is not working to enact a public option, and force him back on track? Or will many make believe that Obama is doing all he can, creating a precedent for political unaccountability that will undermine progressives on other issues?

Barack Obama may believe that activists are “all wee-weed up” (Obamaspeak for getting all anxious for no particular reason) in response to his increasingly inexplicable health care campaign, but its more likely that the President has been taken aback by his bases’ willingness to hold him accountable so soon. After all, Bill Clinton got a free ride until the 1994 election debacle, and Obama had to assume that the combination of his historic campaign and following the unpopular George W. Bush would give him at least one year’s grace period.

Obama: Mobilizing for “It”

Obama’s problem with his base is simple: he promoted a public option as the best way to control health care costs, mobilized his base on behalf of this proposal, but now appears satisfied to pass far more incremental reforms.

Evidence for this came in a August 23 New York Times story that detailed how Obama receives advice from Tom Daschle. Daschle, described as a “highly paid advisor to hospital, drug, pharmaceutical and other health care industry clients,” both “recommends and predicts an incremental approach.”

Recall that Obama picked Daschle to be his point person for health care reform until the former Senator’s tax problems forced him to withdraw. Sounds like, as the Times headline put it, he still has the “Ear of the White House.”

But more troubling evidence comes from Obama’s message sent out last Saturday to his activist backers through Organizing for America (OFA):

“On Thursday, an astounding 280,000 Organizing for America supporters gathered online to huddle with the President at our National Health Care Forum. With Congress about to return to Washington to make historic decisions on health insurance reform, the President chose this critical moment to speak directly to the OFA community. He reminded us of how far we’ve come and what we can accomplish together:

“Remember one thing: Nothing is more powerful than millions of voices calling for change. That’s how we won this election. You know this, and that’s why since OFA launched its health reform campaign in June you’ve hosted 11,000 events in more than 2,500 towns in every single state and every single congressional district…I am absolutely confident that we can get this done, but I want everybody to remember, this has never been easy….We are not going to give up now. We are going to get this done.”

Now it’s up to us to take the next step. This week, we need to make sure every member of Congress heads back to Washington hearing overwhelming support for change. Lies and fear must not have the last word about the health reform America so desperately needs. So here’s what you can do– find and attend a “Let’s Get It Done: Health Insurance Reform Now” event near you.”

It’s great to say, “Let’s Get It Done,” but it helps to know what the “it” is. And it does not appear that a specific health reform plan including a public option was promoted at these 11,000 events.

The message goes on:

“There are thousands of events, in every part of the country. In some places, we’re rallying near local congressional offices to deliver signatures of support from voters. In others we’re meeting in high traffic areas to offer passers by an easy way to get the facts and call Congress, thanking those fighting for reform and urging others to stand with their constituents. Wherever you live, you can find a powerful way to show Congress, the media, and our neighbors that the American people have one clear message about health reform: Let’s get it done.

Thursday, the President made the stakes of reform crystal clear. He talked about how, with health care costs rising three times faster than wages, the cost of inaction is simply too high.

He explained how reform will guarantee competition and choice. He described the Insurance Guarantees that will protect every American from discrimination against preÿexisting conditions, exorbitant charges, and arbitrary denials or reductions in coverage just when we need it most.

And he made plain his stance on the public option: “So let me just be clear: I continue to support a public option, I think it is important, and I think it will help drive down costs and give consumers choices.”

Obama backers will be cheered by that last sentence. But this should not obscure that Obama’s priority goal to “get it done,” even if this excludes the public option necessary to make “it” succeed.

Here’s the key point about this all-important email: the 280,000 OFA supporters were not urged to mobilize for a public option, success was never linked to a public option, and Obama’s support for the public option sounded defensive, as if he were tired of having to restate his commitment.

In truth, Obama could pass a bipartisan bill in early September that “will protect every American from discrimination against pre-existing conditions, exorbitant charges, and arbitrary denials or reductions in coverage just when we need it most.” But such a bill will not provide universal coverage, and is not the transformational change that candidate Obama promoted.

Obama’s repeated support for a public option may satisfy much of his base. But others will wonder why a popular president did not simply impose his will on Congress on his top priority issue, particularly when the public option has long had solid public support.

In The Activist’s Handbook, I described how Bill Clinton betrayed environmentalists early in his presidency and was not held politically accountable. I describe how this inaction told Clinton that he was free to engage in future betrayals on environmental issues, which he proceeded to do until he faced re-election in 1996.

Obama is very different from Clinton, but politicians do not reach the White House without knowing how to test the flexibility of their base. This test is occurring now.
Activists either insist that the President accept nothing less than a public option, or pave the way for Obama’s further “compromises” on the many other issues once widely thought to represent the ushering in of a new progressive era.