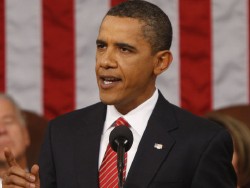 Frustration with the Obama administration from the left due to the failure of the administration to embrace and implement a progressive program seems to be increasing. It is now clear that while Obama is a far better president than his immediate predecessor, an extraordinarily low bar to be sure, he will not be the progressive leader for which many had hoped during the campaign. His governing style has been largely centrist with a preference for compromise over bolder, riskier decisions. The two most common explanations for Obama’s moderate governance are that critics on the left are not being fair to the president and holding him to standards that are too high or that the US is a center-right country, so left-of-center leaders like Obama are inevitably going to encounter obstacles.

The first explanation, that critics on the left are simply wrong, is based on willfully ignoring the realities of the Obama presidency. While it is true that Obama has passed health care and economic stimulus bills, defining these as progressive is demonstrably inaccurate. Moreover, Obama’s failure in other areas, from strong environmental legislation to marriage equality, also undermines that explanation.

The second explanation, that Obama has failed because the US is a center-right country, is essentially a Republican talking point, and not even a creative one. It is what right wing analysts and pundits say when they have run out of other ideas. The power of the argument is that it is so devoid of meaning that it is almost impossible to rebut. Without defining what is left, right and center and determining how to accurately measure views on these issues, the assertion means nothing.

Another explanation is that Obama has simply failed because he is indebted to powerful moneyed interests, not really a progressive, or too timid. This explanation personalizes the situation too much. While Obama undoubtedly could have done more, it is far from clear that he could have passed sweeping progressive legislation. Presidential power, after all, is an often overrated and elusive thing.

Although there is no easy explanation for Obama’s failure to deliver for the progressive movement which helped elect him, none of the explanations most commonly offered are satisfying or helpful largely because they are based on ideological positions rather than real analysis. While the direction of Obama’s presidency may be difficult to explain, it has demonstrated the narrow bandwidth in which American politics occurs. Similarly, while claiming that the American people are center right is inaccurate, it is nonetheless true that politics in Washington occurs in a very limited policy space ranging from the center to the right.

The evidence for this can be seen in virtually any significant policy debate, but rarely with more clarity than in the health care debate. A single payer system, which is viewed by most of the industrial world outside the US as a centrist common sense solution, was dismissed by both parties as too radical before the health care debate really began. Instead the policies debated were largely modifications to a privatized health care system. The bandwidth was sufficiently narrow in this area that progressive solutions were ruled out before the discussion started. Similarly, throughout the economic crisis an entire range of issues such as major spending increases on infrastructure and unemployment relief, public options for the banking sector and meaningful tax increases for the richest Americans were simply never discussed.

This limited bandwidth is not due to an absence of progressive impulses, or to a center right consensus on the part of the American people, or personal failing on the part, not just of Barack Obama, but of all elected officials who run as progressives. It is, at least in part, due to institutional constraints which are structural, legal and political in nature. Obama is constrained by a Senate that over-represents conservative rural interests; a political environment in Washington and set of campaign finance laws that still give tremendous power to moneyed interests as elected officials must raise unseemly amounts of money in order to seek reelection; and a system of shared powers, overlapping jurisdictions and court challenges that make real change extremely difficult. There is also, of course, a right wing attack machine, but the noise the far right has made notwithstanding, they have not been politically relevant for much of Obama’s time in office.

The existence of these constraints is part of political reality, but for many progressives there is a sense that the administration has used these constraints to rationalize away their relative inaction and timid policy making. It is clear that rapid progressive reform cannot be brought about simply through electing a president, but it is equally clear that even given these constraints more could have been done. Presidential decrees could have ended don’t ask don’t tell, and more aggressive bargaining would have led to a better health care. It is the failure to do this, not the failure to overcome the harsh political constraints, that should be the cause for the most concern from progressive supporters of the President.