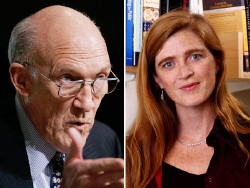 The netroots is ablaze at comments made by retired GOP Senator Alan Simpson, who President Obama appointed to his Deficit Reduction Commission. Simpson told a prominent women’s rights advocate to get a “real job” – and called Social Security a “milk cow with 310 million tits.” A growing chorus of Democrats are calling for his resignation, and the Progressive Change Campaign Committee has launched a website called stuffalansimpsonsays.com. But the White House accepted Simpson’s apology, and wants to move on. What’s most galling is we didn’t see Obama let Samantha Power off the hook when she called Hillary Clinton a “monster,” and Van Jones was quickly shown the door after Glenn Beck waged a crusade against him. Apparently, the “no drama” rule for Obama only applies to progressives.