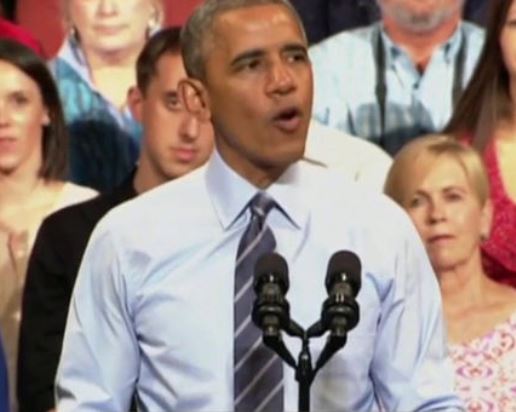 President Barack Obama has a chance to define his presidency and vindicate the ideals of his 2008 campaign by one decisive act: issuing an Executive Order granting legal status to millions of undocumented immigrants. By doing so, Obama immediately renders the constant media criticism of  him both irrelevant and  foolish.

For some, Obama’s defining moment was his support of marriage equality. Others see his defining moment negatively, in his failure to ensure a “public option” for health care after publicly backing the plan.

But for many of us, granting legal status to millions of undocumented immigrants is Obama’s defining test because:

3. The U.S. legacy of mistreatment toward Latinos;

4. Latinos’ loyalty to the Democratic Party;

5. The mass activism in support of immigration reform;

7. It will make the Tea Party even angrier

8. It defines Obama as principled and tough

With over two years left in his presidency, Obama is already a media punching bag. And if you think that’s because of  personal deficiencies, check out the steady attacks on New York City Mayor Bill de Blasio—who has all the personal warmth Obama is said to lack.

Obama and de Blasio are attacked because they are progressive. And if you think Obama is not progressive, ask yourself how many U.S. Senators not named Elizabeth Warren are clearly to the left of Obama.

I would say none. And that’s why Obama is attacked not only from the right, but from neoliberal Dems like NY Times columnist Maureen Dowd. Dowd’s disparaging use of “Barry” for Obama’s first name is akin to the white racists who called Muhammad Ali “Cassius Clay.”

The traditional media wants a President who threatens and invades other nations at the drop of a hat. Because Obama refuses to do so, even drone strikes and maintaining troops in Iraq can’t alter the media framing of him as “weak.”

Playing to the Base

Obama’s presidency is summed up as follows: when he plays to his core base, his popularity rises and his policies improve. When he alienates his base—as he did around school “reform,” the sequester and other bad budget deals, and by his waffling on the Keystone Pipeline—he gets less popular and his policies fail.

Granting legal status to millions of undocumented immigrants will galvanize the Democratic base. Recall the impact of Obama’s executive order legalizing Dreamers and multiply it by the thousands. Legalizing millions will have an emotional power far beyond passage of the Affordable Care Act, or any other legislation Obama has signed.

Granting legalization to millions will define Obama’s presidency because he did it on his own. Yes, he was pushed to do so by immigrant rights activists, whose earlier failure to hold Obama accountable (which I detail in The Activist’s Handbook) has shifted dramatically. But the bottom line, as also occurred when Obama was pressured on marriage equality, is whether he  responds to his base on their core priorities.

As the NY Times titled it July 3 editorial, Obama must “Go Big on Immigration.” This is likely his last chance to implement the transformative vision promised in his 2008 campaign.

Republicans will loudly protest no matter how small a legalization pool Obama creates. Meanwhile, Obama’s action will galvanize the Democratic base, particularly young voters who are needed at the polls in November.

Amidst all the problems going on in the world in July 2014, Barack Obama has a chance to bring real  justice to millions. He says he will be ready to  issue his order by the end of summer.

With the meaning of his presidency at stake,  Obama must seize the moment to define his place in history.

Randy Shaw is Editor of Beyond Chron. He chronicles the rise and growth of the immigrant rights movement in Beyond the Fields: Cesar Chavez, the UFW, and the Struggle for Justice in the 21st Century