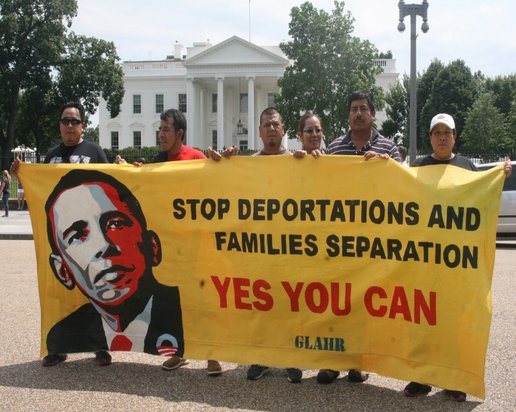 President Obama’s latest broken commitment to millions of undocumented immigrants and their supporters is a stab in the back to all activists working for social change. After setting an end of summer deadline for an Executive Order legalizing millions, the President has again insisted that the Time is (Not) Now.

Obama’s message to activists is clear: if you believe that politicians will reward organizing and mobilizing for change,  you are naïve. Democratic Party Presidents don’t care what their base thinks, and if activists don’t like it, tough.

Not since former Obama Chief of Staff Rahm Emanuel was caught on tape saying “F— the Left” have we seen such naked contempt for those whose labors put Obama in the White House.

Much of the media has defended Obama, agreeing with his assessment that delaying his Executive Order was necessary to prevent major losses for Democrats in November. But this analysis ignores the president’s long history of broken promises to the immigrant rights movement.

As I describe in the new edition of The Activist’s Handbook, Obama spent much of his first year as president making and then breaking commitments to address comprehensive immigration reform. The pattern is almost identical.

In both 2009 and 2014, close Obama ally Congress member Luis Gutierrez spoke publicly about personal meetings in which the President gave assurances for action. Gutierrez always made it clear that he was expressing his interpretation of Obama’s sentiments, but clearly the President was depending on his ally’s assessment to be promoted to, and trusted, by immigrant rights supporters.

Gutierrez’s words enabled Obama to buy time for further inaction. And after squandering 2009, it was claimed that he couldn’t help immigrants in 2010 out of concern over the midterm elections.

Low turnout from a disappointed Democratic base handed the House to the GOP that year. Now Obama is repeating this mistake in 2014.

I can only imagine Gutierrez’s feelings upon learning of Obama’s latest betrayal.

It was Obama who announced that he would delay his Executive Order until “the end of summer.” Nothing stopped him from acting earlier this year, when it was clear that comprehensive reform legislation was dead in the House.

Now he is claiming that  the arrival of Central Honduran immigrants changed the political calculus. But it should be obvious that if this had not occurred, Obama would have found another excuse—ISIS, Ukraine, the Mideast war—to avoid action.

By announcing he would delay action until summer’s end, it was nobody other than Obama who ensured it would be connected to the November midterms. He could have reduced potential election impacts by issuing his Order in June.

And what are these November impacts that now so concern Obama? Senate races in Arkansas and Louisiana where the Democratic incumbents vote against the Party’s base on most key issues.

Are the lives of millions of undocumented immigrants and their friends, families and supporters really less important than whether Kay Hagan is re-elected in North Carolina?

I get the importance of Democrats maintaining the Senate. But not much is happening in that body under Democratic Party control. House Republicans will always prevent immigration reform and any other progressive legislation. Obama has become yet another Democratic President telling his base that they have to delay action on their agendas until the next election, and the next, and the one after that, and on and on.

Those massive nationwide immigrant rights marches were in 2006, not 2013. The movement has waited long enough.

Why Not Wait Until December?

Obama defenders insist he will “go big” on legalizing immigrants in December, so why risk losing the Senate over a few month delay? Putting aside the potential deportation risks that exist until Obama acts, there is a larger point here that should concern all activists.

People take time out of their regular lives to work on social change campaigns because they want to achieve a goal. Immigrant rights activists have done so for years.

When activists organize and mobilize people behind a candidate claiming he will help achieve the goals of your campaign, the activist is putting their own credibility on the line. It is the activist who is assuring others that walking that extra mile for the campaign is worth it. That paying a babysitter so you can make phone calls will all pay off down the line.

When Barack Obama and other politicians then break promises time and again on core issues, activists and those they mobilized all feel betrayed.

And they decide that the entire social change game is rigged, and not worth their time.

That’s how a candidate ushered into office on Hope leaves millions without it.

Randy Shaw is Editor of Beyond Chron. He traces the rise of the immigrant rights movement in his book, Beyond the Fields: Cesar Chavez, the UFW, and the Struggle for Justice in the 21st Century