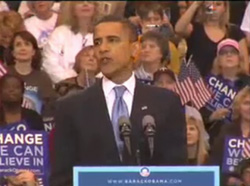 After Ronald Reagan defeated Jimmy Carter in the 1980 presidential election, the Heritage Foundation issued a white paper, “Defunding the Left.” The document became a blueprint for the Reagan Administration’s immediate scaling back and/or elimination of VISTA, CETA and other federally funded public service jobs assisting low-income communities. Also slashed was funding for the arts and humanities, legal services, and the federal Community Development Block Grant program (CDBG), which aids thousands of non-profit groups to improve distressed neighborhoods. In one swoop, tens of thousands of people working fulltime for social and economic justice lost their jobs. And over 25 years later, the nation’s public service infrastructure has not been rebuilt. While President Clinton created Americorps, this represents only a tiny fraction of the public service budget that Reagan slashed. Both Barack and Michelle Obama have personal histories with public service, and know that tens of thousands of young people want to make a difference but need public service jobs. Progressives must start building the support necessary to create these opportunities in 2009.

Those under 30 might find it hard to believe that the United States government ever helped young people wanting to make a difference in the world get a government-funded job. But this was the case from the mid-1960’s until the Reagan Administration, and the destruction of the nation’s public service infrastructure remains one of Reagan’s lasting legacies.

In the pre-Reagan era, young activists could join the VISTA program and work (for low wages) with community organizations in low-income communities. The Tenderloin neighborhood of San Francisco was rife with VISTA workers, and they played a key role in maintaining the community as a low-income residential neighborhood.

The CETA program (Comprehensive Employment Training Assistance) provided public service jobs to low-income residents, many living in distressed urban communities. CETA provided the training necessary for these residents to secure permanent jobs in community development or social services in either the private or nonprofit sector. The Reagan Administration wanted nothing to do with a program that helped disadvantaged young people, so it axed CETA, which has never been replaced.

Once upon a time not so long ago, the federal government used to amply fund the arts and humanities. But the Reagan Administration viewed money for arts, music, public broadcasting, and other cultural activities as subsidizing “the left,” and sharply cut what it could not kill.

None of this funding came close to being restored during the Clinton Administration.

CDBG primarily funds “brick and mortar” projects, not the “liberal advocacy” that Reaganites associated with legal, community organizing or cultural programs. But CDBG employed thousands of people to work on improving housing and neighborhoods in “liberal” urban America, so “defunding the left” meant that CDBG funding had to be sharply curtailed.

This list goes on an on. And, as Barack Obama is so fond of saying, now is the time, and 2009 is the moment, to reverse this course.

Why bring up the need for the Obama Administration to “re-fund” the public service infrastructure when the November election is still months away? Because key constituencies are already securing commitments for action, and unless activists make this a priority, it will be lost among the innumerable demands that will be competing for the new Administration’s attention.

Recall that in the first 100 days of the Clinton Administration, the President clearly signaled that he would quickly cave on most of his progressive commitments at the first sign of conservative pressure (i.e. Lani Guinier). In contrast, Ronald Reagan secured the major accomplishment of his eight-year presidency in 1981, when he cut taxes for the rich and slashed social and public services programs to the bone.

For the millennial generation, and those who have come of age since the 1990, the very notion that the federal government should make a major investment in community advocacy and service jobs could be seen as politically unrealistic. And I know many who went through the Reagan cutbacks who do not believe the nation will ever revive its public service infrastructure, regardless of the proven effectiveness of VISTA, CETA, and a whole range of programs.

But if Barack Obama did not want people to aim high, and to not be bound by the political dynamics of the past, he would not have titled his book The Audacity of Hope.

With hundreds of thousands of young people eager to work fulltime in helping Obama move the nation in a new direction next year, vehicles are needed to channel this energy.

The Reagan Administration and its successors have led progressives to virtually give up on increased federal funding, and the Clinton Administration bent over backwards to avoid accusations that it was restoring “Big Government.” Obama has talked about linking a public service program to waivers of student loans, but this should be only one component of a much larger agenda.

Imagine a federal government committed to funding the arts, music, legal services, and community-building services. The United States was once such a place, and if people mobilize, it can be so again.