Obama vs. Clinton: What Would Cesar Chavez Do? 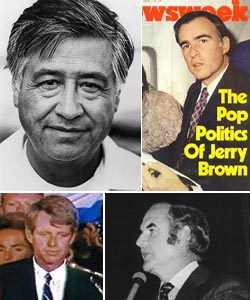 When Barack Obama shouted “Yes We Can” in his New Hampshire concession speech, he invoked Cesar Chavez’s legendary rallying cry, “Si Se Puede.” In response, the Hillary Clinton campaign quickly turned to Dolores Huerta, Chavez’s longtime UFW ally, to undermine Obama’s effort to identify with the farmworkers movement. Huerta came to Nevada and proceeded to bash both Obama and the hotel workers union (UNITE HERE) that endorsed him. She was then joined by Chavez’s brother, Richard, in an attempt to send a strong message that Clinton — not Obama — would best carry out Cesar Chavez’s legacy. Latino voters went overwhelmingly for Clinton, and Huerta’s arguments may have helped. But the actual history of Chavez and the UFW in its heyday from 1968-1980 offers a different message. In each of these presidential primary elections, Chavez and the UFW defied the Establishment candidate to back a more progressive Democratic insurgent. And Chavez did so even when this meant bucking most of organized labor, and supporting an outsider against an incumbent Democratic President.

Since Cesar Chavez’s death in 1993, Dolores Huerta has toured the country encouraging the perpetuation of the farmworker leader’s legacy. But in Nevada last week, Huerta used her iconic status to attack the insurgent campaign of Barack Obama on behalf of the Establishment candidate Hillary Clinton — an approach completely at odds with that taken by Cesar Chavez and the UFW at the height of its power.

In its first foray into presidential campaigns in 1968, Chavez and the UFW backed Robert Kennedy against the Establishment, pro-war and labor-backed Hubert Humphrey. The UFW did not simply endorse Kennedy — the union played a leading role in Kennedy’s wining of the California primary, which could well have brought him the nomination had he not been assassinated after concluding his victory speech.

In 1972, Chavez and the UFW strongly backed insurgent progressive Senator George McGovern. This support for McGovern again put the farmworkers movement at odds with the AFL-CIO, but Chavez was not deterred from strongly backing the more progressive candidate. While McGovern was not elected, the 1972 Democratic Convention became a public relations coup for the UFW lettuce boycott, with state party leaders announcing their votes for McGovern along with their commitment to boycott non-union lettuce.

In 1976, Chavez and the UFW went all out for Jerry Brown even though the California Governor entered the Democratic presidential race after Jimmy Carter seemed to have it sown up. With Marshall Ganz heading the UFW’s crack organizing team, Brown won a string of primaries at the end of the season and, while not beating Carter, put himself on the national political map.

Carter won the presidency, and, as the incumbent, became the Establishment choice for the Democratic nomination in 1980. But despite Carter being a heavy favorite, Chavez and the UFW again went with the more progressive Jerry Brown. While the UFW and Brown were strong allies, Chavez passed up a chance to earn favor with the Party establishment by again dispatching his troops on behalf of an underdog candidate.

In Nevada, Huerta not only deviated from Chavez’s legacy in supporting the Establishment-backed Clinton, but she also engaged in vitriolic attacks against a union whose national hotel boycott in 2006 came directly from the UFW’s playbook.

Huerta described pro-Obama radio ads by UNITE HERE as “pathetic” and accused the union of “intimidating” workers. She even said that the union was telling workers “if they vote for Hillary they could be fired.”

This sure does not sound like anything Cesar Chavez would ever say about one of the nation’s most progressive unions. In fact, these are precisely the kind of attacks that were regularly made against Chavez and the UFW in response to their successful Latino voter outreach efforts.

Huerta certainly has the right to campaign all-out for Hillary Clinton. But let’s not make believe this is consistent with Cesar Chavez and the UFW’s historical legacy.

Beyond Chron editor Randy Shaw is the author of the forthcoming Beyond the Fields: Cesar Chavez, the UFW, and the Struggle for Justice in the 21st Century, to be published in September by the University of California Press. He can be reached at rshaw@beyondchron.org