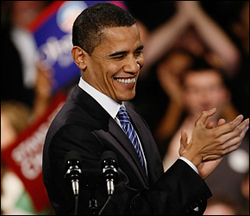 Barack Obama’s victory in the Iowa caucus Thursday night sent a powerful message of change – as a record turnout (especially among young voters) picked him the winner with 38% of the total vote. John Edwards, who likewise ran a populist campaign that emphasized change, came in second place with 30%. When asked what was the most important factor in a candidate, voters picked “change” over “experience” by a 51-20 margin – giving Hillary Clinton’s establishment campaign a humiliating 3rd place finish at 29%. Obama defied expectations by even beating Clinton among women and registered Democrats, which questions her viability as a candidate. But while Obama’s insurgent campaign has crystallized the message of change, the dirty little secret in presidential primaries is that the establishment always wins. As the fight moves to New Hampshire and other states, Obama’s campaign will have to defy historical precedent to dethrone the Clinton dynasty. I believe he can prevail, but it will be a different story for Mike Huckabee – who won last night’s Republican caucus.

According to the mainstream media, the big story last night was the record turnout in the Democratic presidential caucus – 236,000, well over the 150,000 predicted and more than double the 120,000 in 2004 (which mushroomed the number from 2000.) Sixty percent were first-time caucus-goers, and they overwhelmingly favored Obama. Most incredibly, over half of Obama supporters were under the age of 30 – proving that heroic efforts to get Iowa students and other young people to come back from Christmas Break paid off.

But the real message from last night’s result was that voters desperately want change, and Obama’s eight-point victory doesn’t come close to measuring how deeply that sentiment was felt. John Edwards, who ran a populist campaign that emphasized economic justice and a shake-up of the status quo, came in a strong second at 30% — meaning that 68% of Iowans picked a “change” candidate when the alternative was a former First Lady who epitomizes the Washington establishment. “The one thing that’s clear from this result,” said Edwards, “is that the status quo lost and change won.”

Even Clinton had to acknowledge this in her concession speech, as she gave credit to all candidates for having presented the case for change. “We’re sending a clear message that we are going to have change,” she said, “and that change will be a Democratic President.” Throughout the campaign, Clinton had tried to re-invent herself as an “agent of change” – but the voters didn’t buy it. She was left trying to feebly tie the message of change back to experience – as she stood there flanked by her husband and his former Secretary of State.

Clinton’s only legitimate basis for being a “change” candidate is that she would become the first woman President in history. Her campaign had sought to use this strategy to bring many first-time women to the caucus, who were supposed to be her secret electoral weapon. But among women, who comprised a healthy 57% of the Iowa turnout, Obama still beat her 35-30 – with Edwards lagging behind at 23. There was a small gender gap, but it was practically nonexistent.

Clinton even lost 33-32 among registered Democrats, who were supposed to favor her while independents favored Obama. The Clinton camp even tried to discredit a Des Moines Register poll earlier this week because its sample included a high number of non-Democrats, even though it made the most accurate prediction for the actual caucus.

But Obama did not win because independents and Republicans showed up to support him, which is what everyone anticipated. As Chris Bowers pointed out, 76% of caucus attendees were registered Democrats – which was not too different from the 79% figure four years ago. Despite his broad appeal among independents, Obama would have still won the Iowa caucus last night even if only registered Democrats were allowed to participate.

For Clinton, the front-runner who had hoped to get the Democratic nomination by inevitability, coming in third place was embarrassing and calls into question her viability as a candidate. Bear in mind that she was not just the party’s anointed establishment front-runner, for every presidential primary cycle has one like that. She is the wife of a popular former two-term President, and one who had cultivated her own career as First Lady and later as a U.S. Senator to merit her own formidable credentials.

Obama’s San Francisco supporters gathered in Tosca, a bar on North Beach to watch the returns and celebrate.

Obama’s Iowa victory will put to test a long-established rule about presidential primary politics (uninterrupted for over 30 years) that the establishment always wins. In every cycle, a candidate like Obama captures the media’s attention as he tries to take on the party’s anointed leader. They may win an early primary or two, but have always lost to the front-runner when Super Tuesday kicks in. Mondale in 1984, Bush in 1988, Clinton in 1992, Dole in 1996, Gore and Bush in 2000 and Kerry in 2004 all faced insurgent candidates when they sought their party’s nomination. But in the end, it didn’t matter.

Here is how Obama can defy this trend. New Hampshire is only five days away, and a clear Iowa winner usually gets a momentum boost. New Hampshire independents can opt to vote in either party primary, and if they go Democratic are likely to choose Obama. Republican John McCain’s poor showing in Iowa makes me think that independents are now even more likely to vote in the Democratic primary, which will give Obama a solid victory. Therefore, he comes out of New Hampshire looking like a strong nominee.

South Carolina is on January 26th, and Obama is already tied with Clinton there with its high percentage of African-American voters. Here is where an Obama victory in Iowa and New Hampshire would have a substantial ripple effect. In the past year, almost every black person I have spoken to about Obama tells me that they don’t believe America is ready to elect a black man. After white voters in Iowa have given Obama a solid eight-point victory, we should expect a huge black turnout in South Carolina.

Then comes Florida on January 29th, and the Super-Duper Mega Tuesday on Steroids on February 5th. Despite favorable media coverage and a solid momentum boost from earlier victories, every insurgent candidate has lost the nomination here – as they simply get overwhelmed by the establishment’s money and institutional connections. But Barack Obama has something that no insurgent has had – a huge campaign warchest, financed mostly from online donations. With resources and momentum, he can still win.

Obama’s win can finally end that streak – showing that it is possible to take on your party’s establishment and win the presidential nomination. I believe that Obama can make history, but I am convinced that the same will not happen on the Republican side. Arkansas Governor Mike Huckabee is also an insurgent who beat the establishment in Iowa last night, but does not have the financial resources that Obama has. Huckabee will suffer the same fate of other insurgents – he’ll be the media sensation for about a month, but will lose the nomination.

Obama’s victory speech last night felt like we were on the cusp of a historic moment, and the people I was with at the San Francisco victory party believed that this was unlike any other Election party we had attended. “They said this day would never come,” said Obama in Iowa. “The sights were set too high. They said this country was too divided. At this defining moment in history, you have done what the cynics said you could not do. You have done what America can do in this new year.”

As Randy Shaw predicted last year, America may be at the forefront of a new progressive era. And Obama’s victory last night in Iowa could be the beginning of better things to come. After all, it did show that America is thirsting for a change – now the trick is to keep the momentum going.