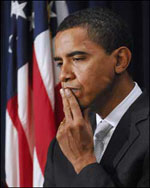 Senator Barack Obama, along with House members Mike Thompson and Patrick Murphy, has introduced the Iraq War De-Escalation Act of 2007. While other Democratic Presidential candidates complain about the Iraq War, Obama has stepped ahead of the pack by actually using his role as a Senator to do something about it. When Congress cannot even pass a non-binding resolution to oppose the President’s “surge” (which the White House has already pledged to ignore), Obama’s approach could both end the war and disarm predictable right-wing attacks that we are “harming our troops.” Sixty-four percent of Americans in a recent poll said that Congress has “not been assertive enough” in challenging the Bush Administration on Iraq, and over half say that we should pull out either “immediately” or “gradually.” Obama’s measure is long overdue, and puts him in marked contrast to other top-tier Democrats who are running for President in 2008.

“All of us have a personal responsibility if we believe that it is morally wrong to escalate this war,” said former Senator John Edwards, who is also running for President. “It is not enough to give speeches, talk to political pundits, or pass non-binding resolutions. We have to step up to the plate, show some courage and do what’s right.” Edwards made these statements on “Meet the Press” last weekend, as he criticized front-runner Hillary Clinton for her refusing to apologize for supporting the War in 2002. Ironically, these words can be used to justify Obama’s presidential candidacy.

Here’s what Obama’s Iraq War De-Escalation Act would do. Unlike the symbolic measures to oppose Bush’s escalation, the legislation is binding – and will cap the number of troops at January 10th levels. Congress would use its power of the purse not to fund any more troops than this amount.

The Act sets up various benchmarks, and directs that withdrawal will have to begin no later than May 1st of 2007, with all troops gone by March 31, 2008. It’s far from a radical idea, and is actually consistent with what the Iraq Study Group has already recommended. “It is time for us to fundamentally change our policy,” said Obama.

But shouldn’t Congress just cut off all funding of the war right away – leaving the Bush Administration no choice but to withdraw, as Democrats like Maxine Waters and Dennis Kucinich have proposed? Ideally, yes, but our troops are already there and stuck in a quagmire – and to cut off all funding overnight will allow Republicans to attack Congress for not “supporting our troops.”

By setting a firm three-month deadline, Bush will have nobody to blame but himself if they haven’t started taking the troops out of harms way when May 1st rolls around. Obama’s proposal is not the quickest way to end the War, but it’s the only one that has both the legal teeth and is politically feasible.

Hillary Clinton says she supports withdrawal, but has done nothing in the Senate. She has made statements that the War must be over by the time George Bush leaves office, but in the meantime has done nothing to propose carrying out a plan to make it happen. On January 17th, she even flat-out refused to support the Iraq Study Group’s recommendation for a phased withdrawal.

John Edwards has called for withdrawal – but has only made vague statements that withdrawal will “take about a year, probably a bit longer.” Neither Edwards or Clinton have proposed concrete target dates – tied in with funding phase-outs – such as what Obama has called for.

Pulling out of Iraq is what progressives have been clamoring for in the last four years. In 2004, San Francisco voters passed a ballot measure that made it official city policy to bring our troops home now. But as public support has grown for such an effort, the only thing we hear from Democratic politicians is vague talks about an arbitrary deadline in the not-so-distant future.

What these Democrats won’t tell you, however, is that if no concrete action is taken before the deadline passes to begin the phased withdrawal, it will be political suicide to call for withdrawal when the date comes. That’s why a phased redeployment – as Obama has called for – is the most pragmatic solution to make a withdrawal deadline actually mean something.

Obama doesn’t have the problem that Clinton and Edwards both have — he was always against the War from the beginning. But at least John Edwards has publicly apologized for voting for the War Resolution in 2002.

Hillary Clinton, on the other hand, wants to have it both ways. She says that she would not have voted for the War based on what she knows now, but then says that she does not regret her vote. “There are no do-overs in life,” she said. Hillary’s lack of resolve in admitting that she was wrong – as well as her refusal to abide to any firm commitments on withdrawal – shows once again that she does not stand for anything.

Meanwhile, Obama is using his position as a Senator to end the War. Not only does this help his Presidential campaign, but it’s also the right thing to do. Democrats who question Obama’s lack of experience should look at this recent action as a good sign of what makes a strong presidential candidate.