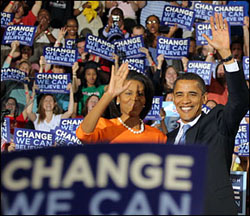 When the polls closed in North Carolina and the networks immediately called the state for Barack Obama, I concluded that there must have been a huge black turnout. There was – but despite talk of a “polarized” Democratic electorate along racial or class lines, Obama made in-roads last night with Hillary Clinton’s base that will help him win the general election. With his 14-point victory in the last primary state that had over 100 delegates, Obama sealed the nomination and erased the “popular vote” gains that Clinton had achieved in Pennsylvania. Clinton’s two-point victory in Indiana – only made possible by Rush Limbaugh urging his listeners to vote for her – did not offset her inevitable loss, as the mainstream media proclaimed it a “momentum-killer” for her campaign. Clinton has cancelled all of her public appearances today, giving Democrats the chance to rally around Obama – who is now the presumptive nominee.

While anyone who did the math could have told you in early March that Obama had an insurmountable delegate lead, the press kept insisting that Clinton could still win the nomination because some states had yet to vote. But last night, nearly half of the remaining pledged delegates were allocated – and Obama won a big victory in North Carolina, the biggest state left with 115 delegates.

According to blogger Chris Bowers, Obama won 63 delegates in the Tar Heel State to Clinton’s 52 – while Indiana gave Clinton 38 to Obama’s 34. In other words, Clinton fell even further behind in a race where the states are quickly running out. She may still win smaller states like West Virginia, Kentucky and Puerto Rico – but they will be offset by Obama victories in Oregon, Montana and South Dakota. What had long been improbable for Clinton is now simply impossible.

But didn’t the long campaign prove that Obama – despite racking a delegate lead – is a “flawed” candidate who cannot unify the Democratic base in a general election? Even if that were true, it would hardly be a reason for super-delegates to thwart the will of the voters – because Clinton’s slash-and-burn negative campaign has alienated blacks and young people. But Indiana and North Carolina disproved this myth – despite a bruising month where Obama endured ruthless attacks from the Clinton and McCain camps.

With all the talk of Obama as “elitist,” he actually gained among voters making less than $50,000 – from 42% in Ohio and 46% in Pennsylvania to 50% in Indiana and 60% in North Carolina. Clinton won white women in Indiana, but Obama did better with that group than in earlier states by ten points. He also improved his standing with gun owners despite efforts to discredit him – and in the South, Obama got 37% of the white vote in North Carolina (compared with 26% on Super Tuesday in neighboring Tennessee.)

In other words, you can’t read the CNN exit polls and conclude that Obama is incapable of bringing the vast majority of white, working-class Democrats who preferred his primary opponent behind him in a general election when the alternative will be Republican John McCain.

But what about those Clinton supporters who said that they would never vote for Obama if he wins the nomination? A lot are Republicans who crossed over to vote in the Democratic primary – and have no intention of supporting Clinton later on. Thirty-six percent of Indiana voters said Clinton doesn’t “share their values” – but 20% voted for her anyway. Moreover, 40% of those who said they’d vote for McCain over Clinton in a general election voted for Clinton.

Rush Limbaugh’s Operation Chaos – where the right-wing talk show host urged his listeners to “bloody up” Obama by voting for Clinton in the primaries – is under criminal investigation in Ohio for violating that state’s election law. With Clinton winning Indiana by a mere 22,000 votes (which had an open primary and she was the overwhelming choice of Republicans), she can thank Rush for giving her that margin of victory – hardly a comforting thought.

Compare that with what voters in Gary, Indiana – a predominantly African-American city just outside of Chicago hit hard by factory closures – did to help Obama in the Hoosier State. “We’re used to having maybe a 22, 23 percent turnout for a primary,” said Mayor Rudy Clay, as votes were being counted in Lake County. “We’re seeing numbers as high as 85 to 95 percent. The Gary people took care of business.” One precinct saw 126 people turn out for Obama – while Clinton only got four votes.

Obama will be the Democratic nominee. Settling this race for good will go a long way towards healing the rifts that a protracted primary season has created.