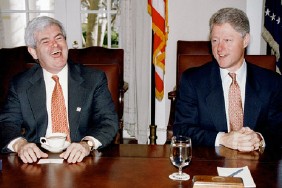 The names have changed, but this week’s competing Democratic and Republican budget proposals have brought the United States back to 1995. We again have an incoming Republican House majority demanding deep spending cuts, and resistance from a Democratic President and Senate majority. The difference, of course, is that the past fifteen years tested each Party’s approach: President Clinton brought economic growth and eliminated the budget deficit, while President Bush brought stagnation and record budget shortfalls. Yet the American media and much of the public have apparently forgotten the success of post -1995 Clinton economic policies. As a result, Republican policies that drove the U.S. economy into the deepest ditch since the Great Depression are given equal credibility with Obama’s. It is as if the past fifteen years and the 2008 elections never occurred. How did this happen?

If a modern day Rip Van Winkle went to sleep in 1995 and woke up today, he would think that the Republican Party never had a President or Congress willing to implement its policies regarding spending, taxes and deficits.

President Bill Clinton’s success at boosting the economy, and eliminating the budget deficit without slashing domestic spending or giving tax cuts to the rich? Never happened.

The Republican Party’s squandering of the deficit through tax cuts, a massive military build-up and wars, and its failure to stimulate domestic investment, all of which led to an economic meltdown in 2008? Never happened.

This is where we find ourselves today.

How did this happen? How has the actual impact of competing economic strategies been so quickly forgotten?

The most common answer is that the corporate media promotes Republican policies, that the November 2010 elections showed voters have changed their priorities since 2008, and that Obama and the Democratic Congress failed to get the economy out of the ditch during 2009-2010, thus restoring economic credibility to Republicans.

But these answers ignore an uncomfortable truth for Democrats, particularly those praising Obama’s budget in contrast to the slash and burn Republican plan: President Obama has consistently helped shift the debate away from jobs and economic stimulus and toward the Republican talking points of income tax cuts, “excess” domestic spending and deficit reduction.

The President has taken several steps to revive the credibility of failed Republican economic strategies. Together, this has blurred understanding of how these strategies increased unemployment, worsened inequality, and caused a colossal economic calamity.

Obama created a bipartisan National Commission on Fiscal Responsibility and Reform Deficit Commission, despite polls at the time showing the public was not concerned about deficits.

He caved in to Republican demands that tax cuts comprise a significant portion of his stimulus package, despite the incredible political momentum he and Democrats had early in his presidency.

He put cuts to Social Security and Medicare on the table, despite little support for this approach among Democrats.

Obama’s unilateral announcement freezing the pay of federal workers for two years lent credence to Republican attacks on public employees nationwide. It also undermined a constituency that includes a higher percentage of African-Americans than the overall workforce, and which strongly backed Obama in 2008.

His controversial deal extending tax cuts for the rich, defended by many Democrats as essential to also helping the long-term unemployed, played exactly into the Republican Party’s budget-cutting strategy. Now we have the President proposing major cuts in Community Development Block Grants, home heating oil assistance, Community Service Grants and other programs that most progressives believe should instead be increased.

Obama could have defiantly refused such domestic cuts, or at least not set the goal posts where a 7.5% cut in CDBG is not the starting point for negotiations. But having worsened the budget deficit by his tax-cut deal, he had to find money somewhere.

Unfortunately, that place is not the bloated military budget, where the massive Bush spending increases and the costly war in Afghanistan continues to take priority over under-funded domestic programs. The type of programs strongly backed by those walking the streets and making phone calls for candidate Obama in 2008.

In 1995, the United States was on the verge of a “dot-com” boom that boosted government revenues and reduced the federal deficit without reducing domestic spending. Absent a similar technological boost, President Obama’s own emphasis on cutting spending ensures even worse domestic budgets in future years.

So when we wonder why Americans would back a failed Republican economic strategy over one that Democrat Clinton proved successful, the buck stops at President Obama. Instead of constantly distinguishing an economic policy focusing on jobs and investment from one centered on tax and spending cuts, Obama has almost relentlessly blurred the difference.

For hope and inspiration in these trying times, read Randy Shaw’s Beyond the Fields: Cesar Chavez, the UFW and the Struggle for Justice in the 21st Century. Shaw is also the author of The Activist’s Handbook.