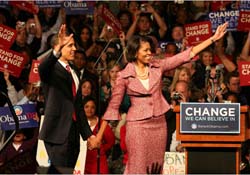 While Barack Obama has clinched the nomination by winning a majority of pledged delegates, pundits still proclaim that he has not won primaries where the demographics favor Hillary Clinton – and so he still has a problem with so-called “white working-class voters,” women and Latinos. But the press ignores the obvious: most Clinton voters will support Obama over John McCain, and a new Gallup poll shows Obama making in-roads with Clinton constituencies. Only white Appalachian voters continue to give him trouble, but Democrats have not won Kentucky or West Virginia in the last two elections. Expect the media to keep repeating the “weak” Obama line until he somehow wins an “unexpected” primary – which will not be South Dakota or Montana because everyone knows that he will win there. But while Clinton is favored to win Puerto Rico on June 1st, it won’t be the blowout everyone expects – which means Democrats should put their lingering woes to rest.

As long as Hillary Clinton keeps on campaigning, it’s really no surprise that she keeps winning groups of voters who have traditionally supported her (seniors, women, and less educated voters.) Insiders know that the race is over because of the delegate count, but the average Democrat in a state that has yet to vote still wants to register their preference. Even in Oregon, where Obama won by an 18-point landslide on Tuesday, 62% of voters said they would rather see the campaign continue than to settle on a nominee ASAP.

Obama lost the popular vote in California, Nevada, Arizona, New Mexico and Texas because Latinos strongly supported Clinton. Now, however, Gallup’s latest national poll shows that Latinos favor Obama over Clinton by a 51-44 margin. Clinton has also dipped behind Obama among female voters, whites, Easterners and those with only a high school education – which had been her base of support. The only group nationally that still prefers Clinton is women over 50.

While these demographic groups preferred Clinton over Obama in earlier primaries, an increasing number have concluded that she will not be the Democratic nominee – and are ready to get behind Obama in November. For example, Clinton may have won California on February 5th by a nine-point margin – but a recent poll shows that now Golden State Democrats would have voted for Obama by six points if they could do it over again.

Nevertheless, it’s disquieting to see what happened in Kentucky and West Virginia – where Clinton won by such huge margins – making people wonder what’s the matter with Appalachia. While hiding behind the vague mantra of “white working-class voters,” reporters don’t want to acknowledge the obvious: many of these voters won’t support a black candidate, and there is not much that Obama can do to win them back in November.

But Obama doesn’t need Kentucky or West Virginia to win the general election, and his comparative advantage over Clinton in swing states like Oregon, New Mexico, Colorado, Iowa, Minnesota, Wisconsin, Michigan and Virginia will more than compensate such a deficiency. In fact, no Democrat is expected to win Appalachia in November – as the New York Times reported, John Kerry only won 48 of the region’s 410 counties, and Al Gore only won 66. These states have been trending Republican for quite some time.

Nevertheless, pundits still claim that Obama has a “weakness” going into the general election – because he can’t seem to win primaries where the demographics favor Clinton. Winning Montana and South Dakota on June 3rd won’t change that perception, because Obama’s victories in North Dakota, Wyoming, Idaho, Nebraska and Utah mean that he’ll win those states handily. They probably won’t change their tune unless he wins Puerto Rico on June 1st – because Clinton’s large support among Latinos makes it conventional wisdom that she will win that primary hands down.

But Puerto Rico won’t be the blowout Clinton victory that everyone expects, and a strong Obama showing could erase the assumption that he hasn’t unified the party. First, the Latino vote is not monolithic. Just because Mexican-Americans in Texas and California supported Clinton by a wide margin does not mean that Puerto Ricans will. While the pundits proclaimed after those primaries that Latinos will simply not vote for a black candidate, they forget that Jesse Jackson won Puerto Rico in 1988.

Second, much has changed in the race since the last time most Latinos had their say (Texas on March 4th). As one blogger commented, “the Clintons’ use of the race card against Obama and Hillary’s claim that she’s the go-to choice of bigots are views deeply offensive to the multi-racial nation that is Puerto Rico.” And if the Gallup poll is a representative sample, Obama now leads Clinton nationally among Latinos.

Third, Obama has the endorsement of Puerto Rico’s Governor and 24 mayors on the island, whereas Clinton only has 17 mayors behind her. While most endorsements don’t matter much, mayoral endorsements usually do because they carry a political machine that can get out the vote for your candidate. Congressional endorsements, in contrast, are less important.

Surprisingly, there’s only been one poll out of Puerto Rico – commissioned in April. Clinton led by a 50-37 margin, which is far less than how much she carried the Latino vote in California, Texas and other states on the mainland. After June 1st, pundits should realize that Barack Obama doesn’t have the “problem” with Clinton voters that they’re making him out to have right now. If they paid attention, they would know it already.