Obama: “Non-Believers” Part of Our Diversity 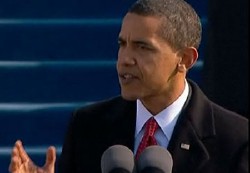 Much to my surprise, our new President actually dared to go where no chief executive has gone before. Founding fathers may have said that they didn’t like religion, but I don’t think (and I could be wrong) that any of the early Presidents actually made any public comments affirming that there are people like myself who don’t believe in the pie in the sky and the lightning throwing deity with the bad temper.

President Barack Obama, in talking about the rich diversity of our nation in his inauguration speech after being sworn-in on Tuesday morning, said it clearly: “We are a nation of Christians and Muslims, Jews and Hindus — and non-believers.” Amid the comments about the wonderful and rich ethnic fabric of this nation, Obama affirmed, by using the word “non-believers,” that atheists and agnostics are part of “our patchwork heritage” that is “a strength, not a weakness.”

It’s not a revolutionary statement. It’s not going to bring down the billion dollar industry that is fundamentalist Christianity. Or turn people away from Islam, Hinduism or any other belief system.

It’s not going to change the intolerance that preachers such as Rick Warren spew forth every day from pulpits and TV ministries all over America. It’s not going to make the great masses of unthinking believers wake up to the truth of Bill Maher’s wonderful new documentary, Religulous.

It’s not going to stop the powerful religious lobby in this country from pushing its awful agenda, whether it be no gay marriage, the teaching of abstinence in public schools or the denial of evolution and science.

It merely raises a hope that the last terrible eight years of an administration cow-towing to the most hateful and bigoted folks in America are truly over and that reason will finally prevail, at least in regards to issues such as gay rights, abortion, and the Federal Communications Commission’s censorship of TV.

I have to admit, I wasn’t expecting it. Like many other queers in this country, I was annoyed by Obama’s choice of homophobic Rick Warren to give the invocation at the inauguration. As an atheist, I was offended by his decision to have any clergy (Christian or otherwise) there on stage with him at that most secular of moments.

Obama’s inclusion of “non-believers” doesn’t make up for Warren or the inclusion of clergy at the inauguration, but it does demonstrate that we have a president who may still invoke the name of a mythical being, but understands (unlike his predecessor George Bush) that he can’t shove his personal religious beliefs down the throats of the rest of us.

A small step in the right direction.